Some tips on how to get the achievement “Broken Geography”

Before getting into the detail, getting this achievement can take a while. It’s all RNG based so you could get lucky but just prepare for a long haul.

Now Broken Geography requires you to “Place 10 cards you didn’t have in your deck, not counting ^Oblivion^”. The only way to do this is through the enemy Prime Matter who’s ability Creation give you 3 random cards (with a 33% chance of dropping a gold card).

Now you know why this achievement is so rare. 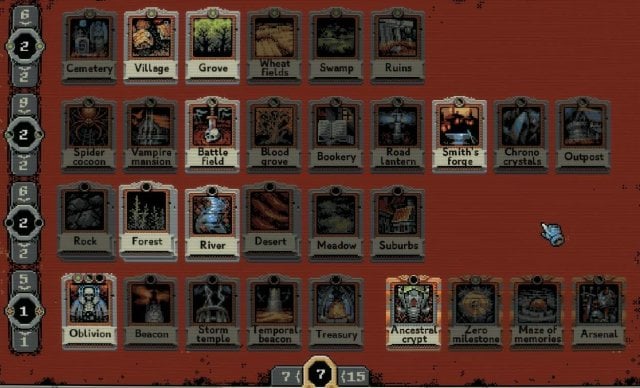 For this we’ll be focusing our deck around the Necromancer class. You can use the other classes, I just like the skeletons.

For sure you want to keep Battlefield and Grove.

For this to work you’ll need to play on Chapter 2+ so Prime Matter has their Creation ability. Personally I did this on Chapter 4 since there’s no limit on resources.

Now for placement you’ll want to place as much groves as possible, with the battlefield overlapping the groves. Keep in mind that overlapping battlefields does not increase the chances for ghost spawns, it unfortunately stays at 20%.

The rest is really just updating your gear and waiting for the RNG to fall into your favour.

And make sure you have enough landscape space to place a Treasury. From personal experience.