An introductory guide to others interested in play-testing or experimentation with Hyforge. 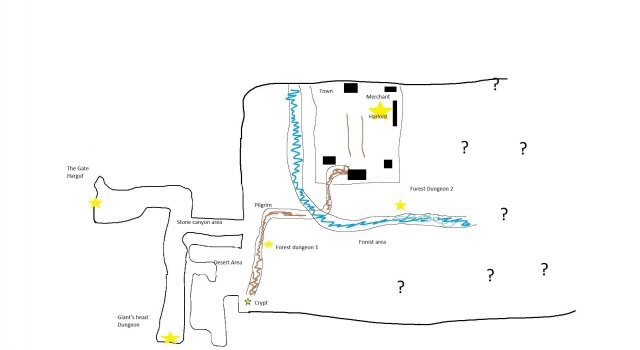 This is a poor quality map I drew in MS paint. It is not to scale or anything, but it does illustrate the key points you’ll want to be familiar with for playing and exploring Hyforge.

The world of Hyforge is pretty big. I encourage you to run as much as possible in order to level your athletics skill asap. This will increase your maximum stamina, thus allowing you to run for longer. Be careful however of running in dungeons. The most common way I have taken damage in dungeons is by running down a hall or around a corner and being caught by a monster’s attack.

In the current build, you can walk/run up a lot of the mountains and hills you would not expect to be able to. There are some very sheer walls that wont let you climb them, like in the Stone Canyon area. It helps getting around and exploring to do this.

You’ll find a great deal of armor during your dungeon runs (Giant’s head has a ton of chests in it,) so don’t worry about buying any. However, I haven’t ever seen a shield drop in a chest, so you may need to buy one from Harloid if you want to use one.

I have encountered five different enemy types so far:

This is really just a placeholder for now, until the mechanics of the game are fully fleshed out and tightened up. As of right now I can say that the basic iron sword is my favorite. With good positioning it is capable of hitting multiple targets, has a good attack speed, and doesn’t take up a ton of room on your screen. There are a surprsing number of weapon options though, and they are for the most part all very cool looking (The Oak staff in particular) and have cool attack animations.