This guide will show you a relatively simple and almost guaranteed way to get the “Now This is Getting Childish” achievement in the Battle of the Bosphorus DLC.

How to Obtain Now This is Getting Childish Achievement

The Game Options And Beginning

1. Select Bulgaria in the New Game screen, pick the default difficulty and make sure “Historical AI Focuses” is on! Otherwise this guide might not work.

2. You can research, produce anything: it’s up to you. The only tabs were going to use and guide you through is the Decisions and the Focus Tree and that’s it.

3. The basic Focus Tree path should be done like this. 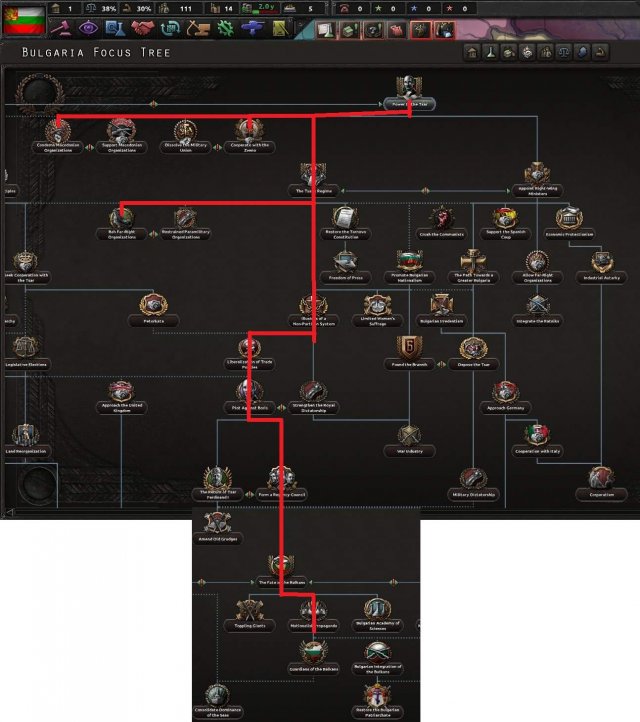 4. You might have noticed some kind of management minigame in the Decisions tab: I am not going to make a guide for this one, if you are quarter-competent and don’t spend the PP on useless things like Anti-Democratic raids, then you should be fine. First-time negative events can ignored most of time (I personally integrate the Agrarian Union and the Zveno, destroying the rest.).

For the rest of the guide, I will only go over important parts and milestones.

The Illusion of a Non-Partisan System

This is the first focus you will need some tinkering for.

Plot Against Boris – Regency Council – The Fate of the Balkans Arc

What focuses you do after this don’t really matter: Personally I like to do focuses that makes the War Goal Tension Limit and the Justifying Time less.

Important: Don’t ever under any circumstances send an ultimatum or even sway any of the Balkan countries (that includes Albania and Greece), otherwise the Italian AI will screw up and invade Yugoslavia early.

It’s time for the final fight against the Yugoslavian child, Peter the II! Wait, where is he? Oh right.

Alright, so after the Balkan arc, you might notice something: the current leader of Yugoslavia is Prince Paul, a grown-up adult vaguely flirting with the Axis. Since Paul isn’t a child, we must wait for Peter II to become the semi-king. Here is how to do that:

Hearts of Iron IV – Tips and Tricks for Getting Started

Before you play the Hearts of Iron IV game, you will definitely want to know these simple but useful tips and tricks. If you have any tips feel free to […]

Lethal Straight is one of the easiest achievements in the game to obtain. However, only around 2% of players have gotten it. Here is a guide to getting this oddly […]