The Pyromancer Build Everyone is neglecting! Blast your way to CT 15 with this Acari based Pyromancer build.

The Acari Bomber is a high adrenaline end game build which makes heavy use of Thermal Bomb for damage and crowd control. The build leverages the set bonus of the Acari legendary armor, which supercharges your Anomaly Power by 50% for each enemy hit by heatwave. 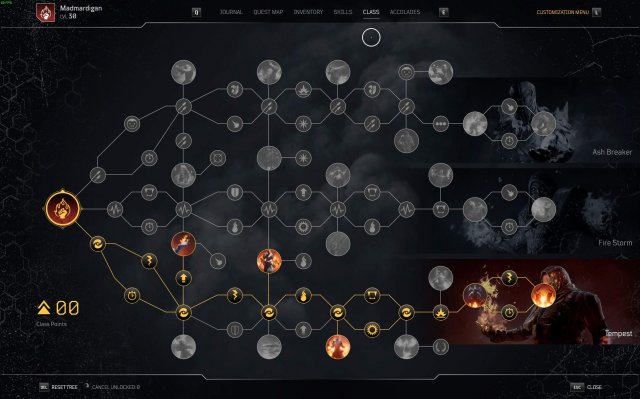 The class tree is straight forward. Since we’re going with an anomaly build we spec out the bottom tree. I won’t go into detail about every node, however the following will highlight some key choices. 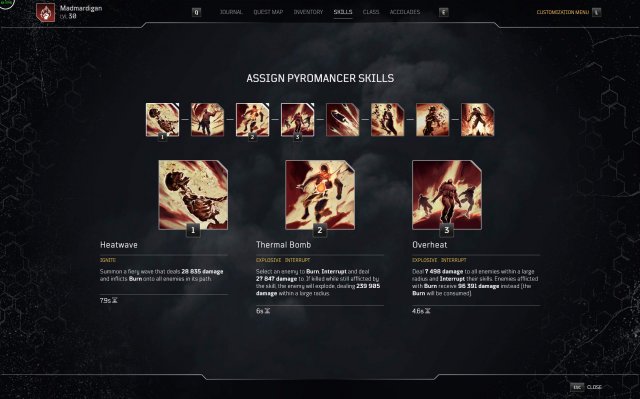 The skills that the Acari Bomber uses are Heatwave, Thermal Bomb and Overheat.

Heatwave will proc your Acari set Bonus, amplifying your Anomaly Power. It will also apply burn which will sustain your HP pool. Heatwave is also a great interrupt. Casting it towards flying Alpha perforos will stun them momentarily and if the timing is right it’ll prevent them from hitting you with their jump attack. Heatwave will also cause enemies to take a stacking 25% damage increase thanks to Tier 1 Mod Burnt Out, which your entire team will benefit from.

Thermal Bomb is your bread and butter. Enemies explode when they die. You’ll have 4 bombs per cooldown cycle, and they’ll be ready to go again in just a few seconds. They also interrupt. Enemies hit take a stacking 25% damage increase thanks to Tier 3 Mod Branded, which your entire team benefits from.

Overheat will be your main damage dealer. It will interrupt the entire map and do chip damage. It will do huge damage to anyone on fire, killing adds instantly and triggering your bombs. Thanks to Tier 1 Mod Pants On Fire you shouldn’t have to worry about outlier enemies. Once the main fight is over you will have cast Overheat enough times that they will have suffered death from a thousand cuts.

Your choice of weapons here is subjective. I’ve chosen the following: 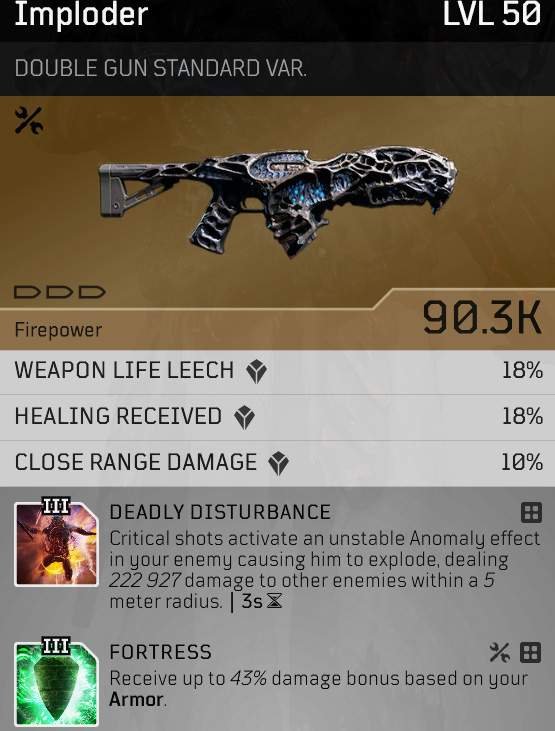 I find Imploder to be under appreciated. The Tier 3 Mod Deadly Disturbance interrupts and causes massive AOE damage, perfect for keeping the mobs at bay during the second or so that your skills are on cooldown after a cycle. The post battle report often shows Deadly Disturbance to be a significant source of overall damage. Shooting an elite in the head while an enemy is about to explode next to them is often enough to ensure they die outright from the bomb, or close to it. More often than not this also means the elite themselves will begin to detonate, so any close by adds can be ignored since they’ll get nuked, giving you time to focus on other threats.

I’ve also added Tier 3 Mod Fortress, which can be found on Death Shield. Because Fortress: 43% increase on all your damage output. 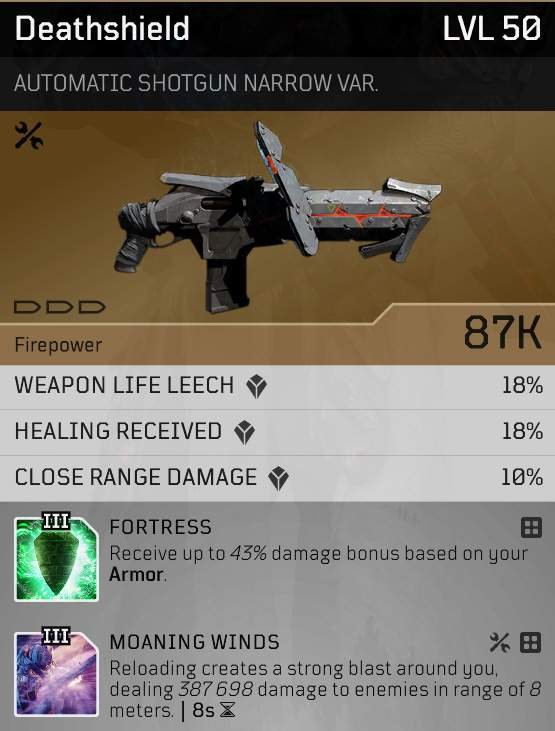 If you’re looking at this guide you should know what Death Shield is by now. Tier 3 Mod Fortress is amazing. I’ve added Tier 3 Mod Moaning Winds in the 2nd slot. Dump your mag at the start of an expedition, then switch back to Imploder. Simply quickswitch when you’re getting swarmed and quickswitch back to Imploder before the reload animation finishes. It does massive AOE damage centered around yourself on reload. 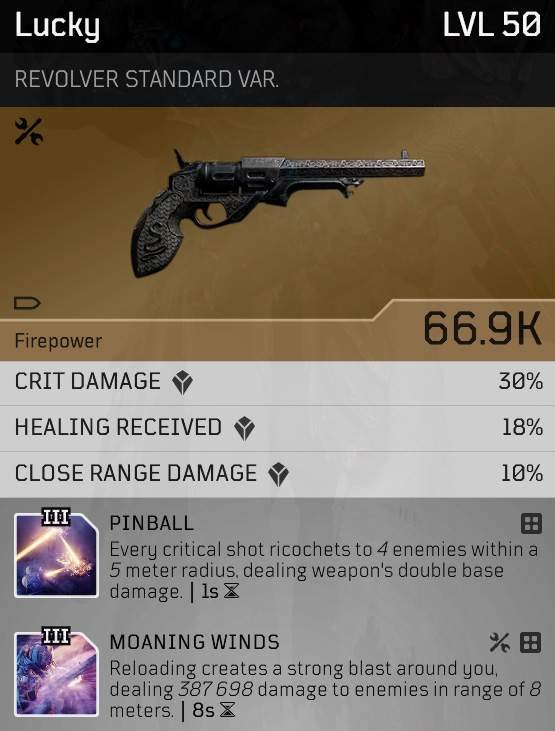 Nobody uses pistols, but they can be used to your advantage. I’ve added another Tier 3 Mod Moaning Winds to this one. I’ve chosen Lucky because it has a small clip, which can be dumped quickly then ignored. It’s a safety net. Usually, it’s not worth using. By the time you’ve used the Tier 3 Mod Moaning Winds from Death Shield your skills are back up and ready for use. Since skills are the source of your heals it’s most often better to start a new skill cycle than to pull out your pistol. Still, don’t sleep on it. Every now and again it’s the difference between killing off a Brood Mother and getting slashed to bits by her.

Here I’m running Helmet, Chest piece and Pants from the Acari Set for the set Bonus, which gives 50% increased Anomaly Power for each enemy hit by Heatwave. The Acari Bomber will have 2 Heatwaves per cooldown cycle which has the potential for a MASSIVE damage buff. By adding Tier 1 Mod Burnt Out to the build your Heatwaves also provide a stacking 25% Increased Damage to enemies hit by the wave. I would have liked to have used the Acari Boots for Cooldown Reduction, then used a purple or other Legendary Helmet with Cooldown Reduction as well, but sadly both Mods that come with Acari Boots aren’t used in this build, so swapping out one of them for a Mod we do use sill leaves one unused Mod Slot.

Cooldown Reduction: The Acari Bomber makes heavy use of CC, along with buffs and debuffs which come from it’s skills. Since these are on a timer we need to keep them up as much as possible. Being able to cast skills frequently will help you control the battlefield and direct your damage where it’s needed most. It will also help your HP sustain.

Skills Life Leech: Much more important than status power on this build. Overheat consumes burn and you should be casting that every 5 seconds or so. As such, the bonuses you gain from Status Power are wiped away frequently, making it a less than ideal choice. Even though you’re dealing less damage over time from Burn, stacking Skills Life Leech helps keep your HP pool topped up during the short window when your burns are active. 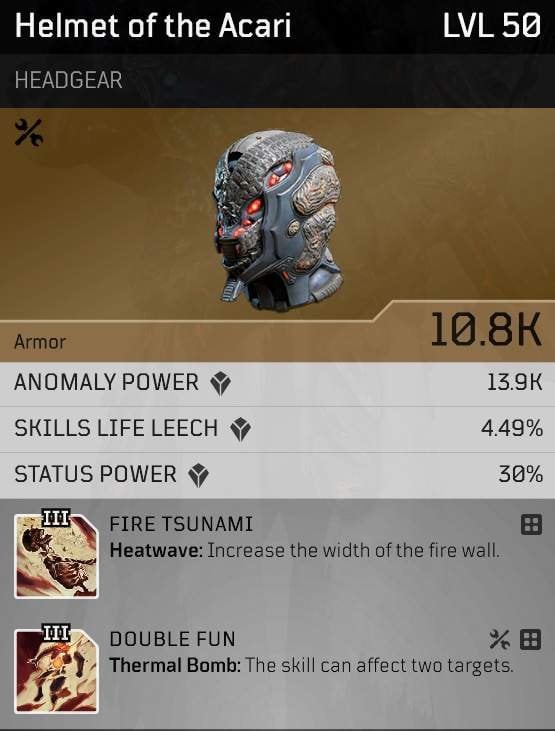 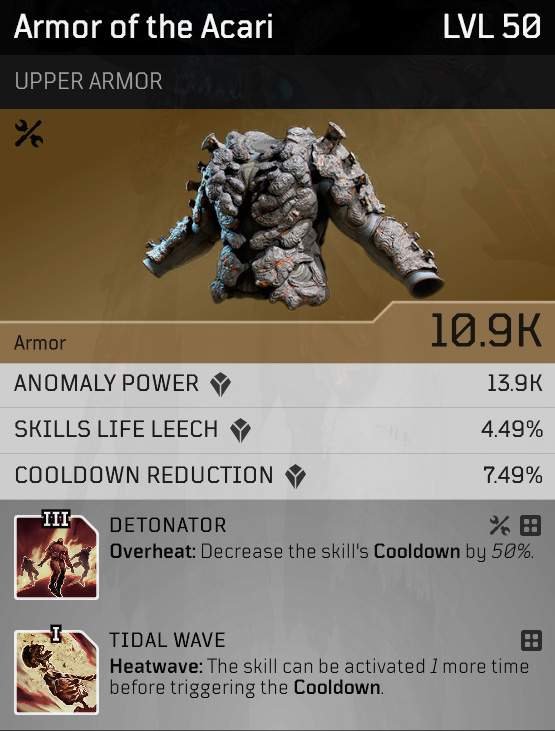 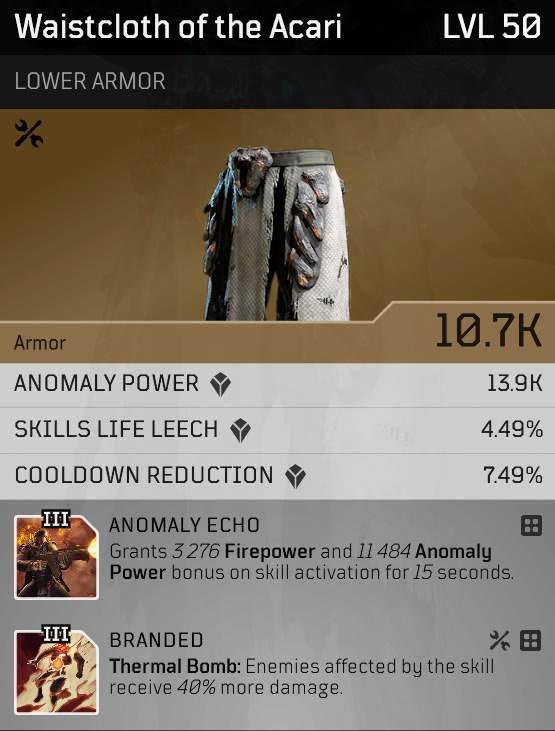 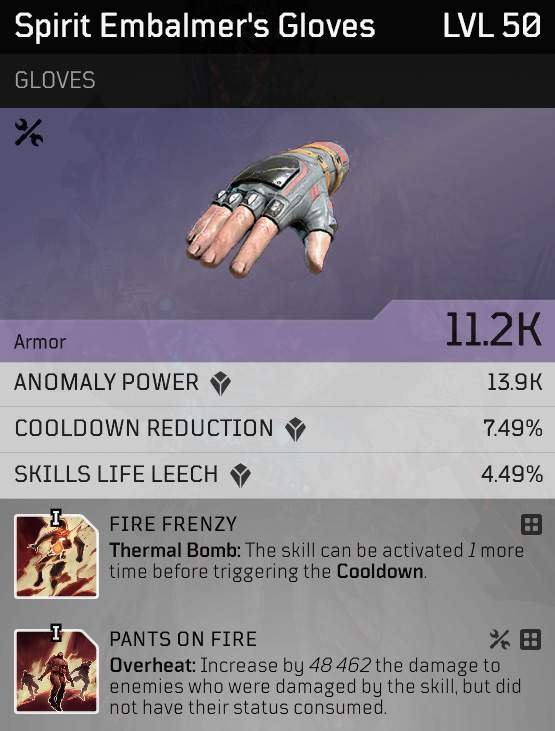 Tier 1 Mod Fire Frenzy: An extra use of Thermal Bomb. Paired with Double Fun this gives you a total of 4 bombs per cooldown cycle. Cast for explosive lols.

Tier 1 Mod Pants on Fire: Does extra chip damage from Overheat to enemies unaffected by burn. This is a great Mod. It lets you forget about those pesky outliers who like to cower in fear from you on the edges of the map. By the time the main battle is over you will have cast Overheat enough times to have killed them. Some of the later spawns do survive from time to time, but usually not. 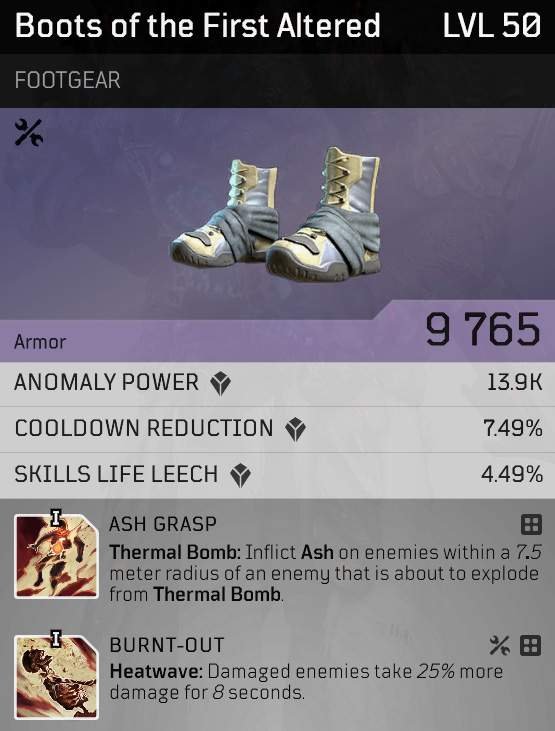 Tier 1 Mod Burnt Out: Essential debuff. Gives all enemies hit a stacking 25% damage taken increase. Paired with Tier 3 Mod Branded you and your team will do a ton of damage.

Tier 1 Mod Ash Grasp: I used this mod extensively during my campaign playthrough and really missed it in endgame since it was the first to go in order to slot in a Circle of Power. I really missed it and did everything I could to fit it in. Eventually I dropped out Circle of Power for it. This mod is slept on and I don’t understand why. It’s so good. Anyone caught within a 7.5m radius of an exploding target will receive ash status. that’s a 15 m Diameter, or about 50 ft. I can’t stress enough how good this is. Any enemy exploding will freeze in place all surounding enemies, which means they won’t be able to avoid the bomb. The CC this provides is nothing to laugh at either. Freezing half the battlefield is an effective way to give you respite from incoming damage while you focus your attention on elites. By the time Ash wears off most of the adds will be dead from the explosions and Overheat.

The Acari Bomber will use medium damage skills frequently in order to freeze and clear the battlefield. They will debuff the enemy, increasing damage done against them. They will make everything explode and it will be glorious.

First thing to do is to dump the ammo out of your Death Shield and Lucky, getting them ready for Moaning Winds to do it’s work when you need it.

When the expedition starts pop Overheat. Run towards the enemy. You should be able to get another Overheat off before you get too close. This will interrupt and stun.

Next, get up close to the largest group of enemies and cast both your Heatwaves, then launch your 4 Thermal Bombs. In a lot of situations you can do a quick 90 degree turn between Thermal Bomb casts, spreading them out over a wider area.

Pop Overheat again. At this point Overheat will kill the adds that were burning from your Thermal Bomb, triggering the detonation. The surrounding enemies will be frozen and will get decimated by the bombs. Elites will take a solid chunk of damage. Try to land some crits with Imploder on them.

Whenever there’s a lull in the battle that brings back all your cooldowns, the cycle should be:

On stunned elites you can get up close, quickswitch to Death Shield in order to proc Moaning Winds, then quick switch back.

With no defensive mods you’ll be pretty squishy, which means you always need to have a skill active on an enemy to benefit from skill leech. If no enemies are close use Thermal Bomb to get some HP Regen or Overheat for a burst heal.

The penultimate of this build is when your Thermal Bombs hit 3 adds and an elite all grouped up together after they’ve been hit by a Heatwave. I’ve taken out Brood Mothers in a single volley. Something to consider is to Heatwave–>Thermal Bomb–>Heatwave–>Thermal Bomb–>Overheat. Often times with weak adds like Perforos 2 Heatwaves is enough to kill them outright, meaning you lose your targets for Thermal Bomb. By Alternating you are ensuring more explosions.

This works really well on single target elites as well. 2 Heatwaves and 4 Thermal bombs will give an insane Debuff on targets with large HP pools, high armor and high resistance. Overheat will do a significant chunk of damage after that. You can easily drop a Brood Mother’s health by half with one cycle, and once it’s completed and you’ve fired Imploder for some crit burst damage, or used Moaning Winds, your cycle will be back up and ready to go again.

If you find yourself getting flanked and swarmed, do a 180 between Thermal Bombs, cast Overheat, then relocate while the enemies are frozen in place, fire off Imploder Crit burst damage, or run into the swarm and hit them them with Moaning Winds.

This is a guide to try and fix some stuttering for people playing Outriders. It’s not a guarantee, your results may vary, but hopefully this will help some others out […]

This guide will explain the math behind how your damage modifiers work in game, which in turn should help you as an individual build your character to be able to […]