Useful tactics and tips aimed to help players who might be struggling to progress up the covenant rankings.

Guide to Tactic and Some Useful Tips

Monster Train is a really fun game, so I hope the advice in this guide can help players who are struggling to make progress. One of the best things about Monster Train is the huge variety of cards which allows lots of different tactics. This guide is definitely not the only way to play, this is just what has worked for me.

Like many players, there was a time where I felt like I wasn’t going to get any further (for me, Covenant 13 seemed impossible for a long time), but after taking a break, I came back, tried some new tactics, and now I’ve beaten Covenant 25 with 4 different clans.

I think the most important thing is to understand tactics rather than specific cards or clans, because you’ll probably be able to find several different cards or monsters that fulfil the same tactical effect.

Having said that, all of my C25 wins have included the Awoken clan. This is my favourite clan for reasons that will become clear as you continue to read. Therefore I’ll recommend playing with Awoken plus any other clan of your choice. Awoken can be either your primary or secondary clan.

A big deck is a weak deck.

This is something that I learned in Slay The Spire. The more cards you have in your deck, the less often you’ll see each specific card, which makes it more difficult to develop an efficient tactic. I usually add a few cards that I really like in the early floors, and then focus on removing weaker cards to get back down to a deck size of around 24.

Apart from very rare examples, I don’t add multiple copies of the same card, even if I really like that card. Keep a small deck, and you’ll see that card regularly anyway.

Don’t be afraid to use the skip button. Also remember that you can spend gold at shops to remove cards (I usually only do this on the last floor if I’ve got some gold remaining after I’ve fully upgraded my monsters).

Your monsters can’t deal any damage if they’re dead.

Awoken has some very useful healing spells. Restoration Detonation heals 10 then does 5x damage to enemy, upgrade with magic power when possible to increase the effect. Unleash The Wildwood fully heals all monsters on the floor, which is extremely powerful, upgrade with holdover if possible so you can play it every turn. And Wildwood Sap’s regeneration is amazing if you either upgrade it to x10 or remove the consume effect, then duplicate if possible and keep stacking up regen on the same monster.

Enemies can’t hurt you if you kill them first.

Take a monster that has a sweep attack, upgrade it with quick, put it on the bottom floor. A lot of the most annoying enemies actually have very low health, so this tactic will kill them before they can do anything.

Awoken has 2 good sweep monsters. I prefer Shattered Shell because it increases attack every time it kills an enemy, which means it can stack up to deal huge damage (upgrading with multistrike is also very strong), but if you’re offered Husk Hermit instead, it can still do a decent job. If you don’t get offered the quick upgrade at a shop, you can also apply quick with the Wildwood Tome card, but this is less reliable because you don’t know what turn you’ll draw the card.

Play as many monsters as possible onto 1 floor, instead of spreading out across all 3 floors.

I think this is the tactic that finally gave me my breakthrough on higher covenant levels, because it affects how much damage you’ll do to the bosses in the final wave of each fight. With, for example, 3 monsters on one floor and 1 monster on another floor, that 1 monster all by itself is pretty much useless against the boss, because it will die very quickly. Find a way to get all 4 monsters onto the same floor, and now that 4th monster will deal much more damage because the boss has to kill the others first.

With this tactic in mind, I almost always take the extra capacity upgrades (the only exception being I might take 1 capacity and 1 energy upgrade if I’ve picked up one of the monsters that costs 3 energy to play). Also, cards that move monsters down to the floor below are really useful (Awoken’s Restoring Retreat card does this) because they ignore the capacity limit, as shown below. 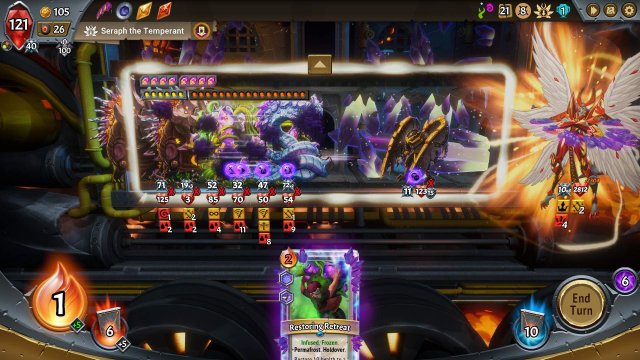 Hopefully this is obvious, but its worth saying anyway. Ideally you want a high health monster who can survive a few hits at the front of a row, and high damage dealers behind. Identify your tanks, then upgrade their max health. Upgrade your damage dealers with more attack, and multistrike if you find it.

I’ve already mentioned the quick/sweep combo. Largestone is powerful if you’ve got the capacity to play the bigger monster. Endless can be interesting in some situations, but I prefer to stop my monsters from dying in the first place. Spikes can be ignored because they don’t really do much damage compared to all the other upgrades you could choose from.

If you have spells that increase monster damage, play them on those that have either multistrike or sweep.

Unless you get the relic which gives them multistrike and damage shield at the very start of the run, you should add 3-4 clan monsters and then remove Train Stewards to keep a small deck.

In the first few floors I always take the path that gives me an extra clan monster. After that I prioritise upgrading monsters and removing weak cards with the Unstable Vortex. Extra gold and free relics are always useful. I like to upgrade some spells at least once during a run. Duplicating cards at a Hellvent is most useful at the end of a run, so you can duplicate an upgraded spell or monster instead of the basic version. I almost never buy relics because I just prefer to spend my limited gold on monsters first, spells second, removing cards third.

This guide lists the upgrades available at each type of Merchant Tent you’ll find along the way in Monster Train. ContentsGuide to Merchant TentIntroductionMerchant of SteelMerchant of MagicMerchant of Trinkets […]