This guide will basically make you Ghengis Khan, destroyer of worlds, and conqueror of Calradia. You will learn how you can defeat significantly larger armies than yours, with some simple cavalry tactics!

Of course, this strategy relies on 60-80% of your army being Cavalry, so you’d optimally be using Khergits or Sarranids for this, who can be trained to be horsemen quickly and effectively. You can obviously use Swadian Knights too, but they will take quite a long amount of time to train, and you need a lot of Cavalry for this, so I wouldn’t recommend.

After you get yourself a sizeable force of any of these (they can be combined as well); Lancers, Mamelukes, Horse Archers, or just normal Horsemen, you are basically ready.

You as the commander who will be leading the Cavalry charge, should be equipped with a fast horse. For this I can recommend the Steppe Charger, a very good balance between Armor, Speed and Manouverability. For a main weapon I recommend something like the Khergit Long Sabre, it will absolutely cut through anything, but this is mostly personal prefrence.

The Strategy in Theory (Crescent Moon)

This strategy, heavily – or I should rather say only – relies on Cavalry. You will also need atleast 10-15 infantry troops, these will basically act as meatshields / bait, however they aren’t supposed to die, they are supposed to get the enemy’s attention.

The main gist of it is, you send your Infantry in to charge head on, which should also make the enemy charge head on. The Cavalry (you), being the main force of the army goes out onto one of the flanks (always opposite to where the enemy is, if they decide to spread out), and charge from the sides. In case the enemy also try to flank, you take the opposite flank for a more effective charge.

The cavalry will engage from the sides AND back while the enemy is distracted running towards your Infantry, which means they are easy pickings. If they do turn around to face you, the Infantry will take them out, at which point they are basically fully encircled, meaning there is no way for them to block any attacks, and you turn the battle into a bloodbath.

In the pictures shown below, I used chess figures (yes, I couldn’t find any good realistic illustrations of cavalry or infantry) to demonstrate the tactic in theory. The player in this case would be commanding the black figures, fighting the white figures. I’ve purposefully made the white pieces have more soldiers, to show how this tactic can easily decimate larger forces as well.

The reason it’s called Crescent Moon, is because your Infantry going head on, and your Cavalry flanking make a Crescent Moon shape when drawn out on a map.

Now to actually do this chad tactic in game, you will first press 1 to select your Infantry, and press F1 followed by F3 to make them charge. They should now be running towards the enemy head-on, which is exactly what they need to do.

Before they run off, select your cavalry by pressing 3, and press F1 followed by F2, which will make them follow you. This is why it’s important to have a fast horse, as your slow horse would hold back your entire Cavalry. Now with your main army following you, you start going out to the left flank (this is personal preference but I find it’s the quickest and easiest flank).

This is what it should look like right now: 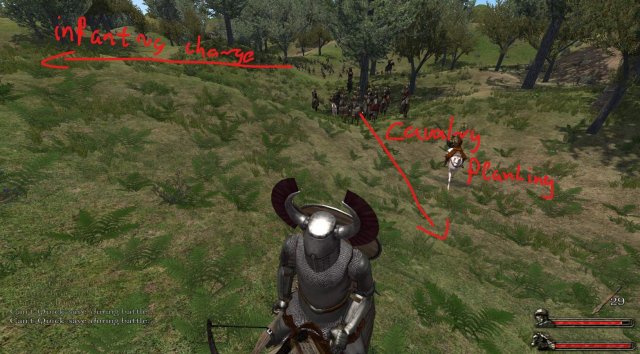 Before your Infantry actually gets into a skirmish with the enemy, you start running towards the enemy from the SIDE, NOT DIRECTLY FROM BEHIND! You run at them from the side, so that you conserve speed, and you dont crash into your friendly troops. IMPORTANT: Once you have run past a few enemy soilders, order your Cavalry to charge by pressing F1 and F3, otherwise they will follow you and thus run past the soldiers instead of attacking them. (These pictures are from a seperate battle). 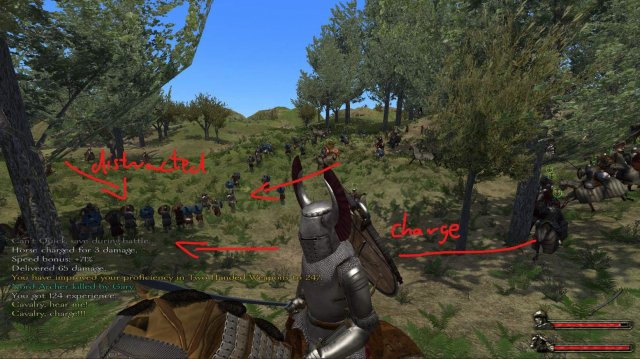 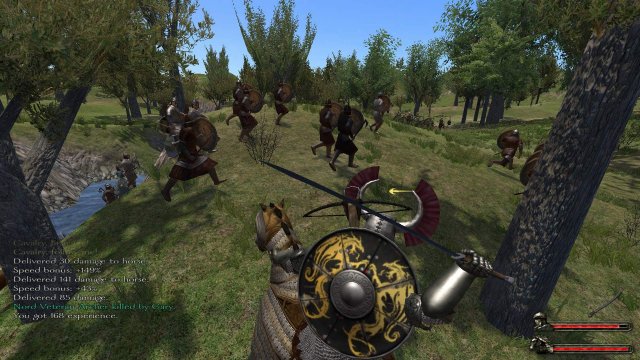 Once the initial charge has concluded, you loop back as shown in the gif, and start picking them off one by one. If your army was equal, or outnumbering their force, you shouldn’t have to do anything else to win.

How Do You Win When Outnumbered?

When being outnumbered, there’s one thing you will do differently when using this strategy. You will open the same way as before, but when the enenmy starts getting reinforcements, you retreat. Why? Because your lancers and other cavalry will lose speed, and start to stand in place, meaning you lose all the advantage you had. And if an enemy reinforcements spawns on top of them, they are basically dead. Whatever you do, do not let your cavalry be surrounded, or let them stand still!

This is what will happen: 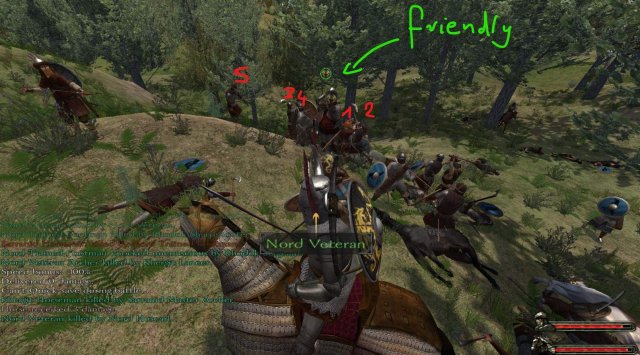 After you killed about a hundred or so, you need to get away from the enemy, and press TAB to retreat, which will start a new battle. Once here, you regain your advantage and just do the same thing over and over till you win.

To prove how effective this strategy is; I went head on with King Ragnar’s army, outnumbering me 3:1. I lost 24 soldiers, compared to him losing 328. I think that alone explains how good this strategy is.

There are a lot of obscure mechanics in Warband that a very large fraction of the playerbase is unaware of. Even veterans of this game do not necessarily know how […]

Soloing is a risky, tricky, thing to pull off in M&B:WB, but with this simple guide, you’ll (probably) find yourself singlehandedly racking up more bandit corpses than you can count. […]