A guide to Advantage, Damage Types and Armor Types, and just generally how it all works. Also a little bit of discussion about my issues with it, because all I ever do is complain.

How the Advantage System Works, and a Concise Chart for Match-Ups

In this guide I will be discussing the Advantage System of Dark Deity and how to read it properly, since I don’t feel the game adequately explains it and I want to assist my friends and other possible people who were as confused about it as I was, especially since it plays a big part in your strategic decision making throughout the game. My hope is to quickly explain how this system works, and then I’ll briefly discuss my personal issues with it and possible solutions in its own section separate from the actual analysis. Any edits are either for grammatical accuracy or to clarify my points more accurately, so apologies if this guide shifts a bit upon revisits.

For those who already understand the system and just want the match-up chart, it’s in it’s own section and you can find it there.

What Advantage Is, and How to Check It

So let’s start with the obvious: What is Advantage? 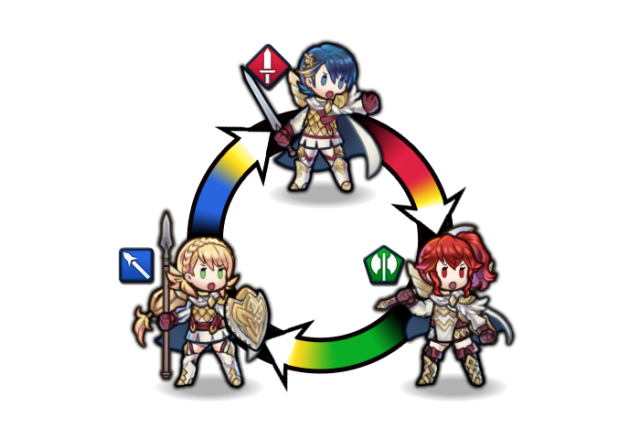 In total, there are (to my knowledge) nine damage types and four armor types. I’ll quickly list them now for clarity.

Like Fire Emblem, these will give bonuses and penalties based on what is attacking what, but I’ll get more into that later. For now, let’s focus on where to find them and what to look for. Every single class in the game has one damage type and one armor type to their name. To showcase this, I’m going to use Sophia. Why? Because I like Sophia.

First, let’s click on her and hit Shift (using keyboard controls for this btw) to check up on her stats. 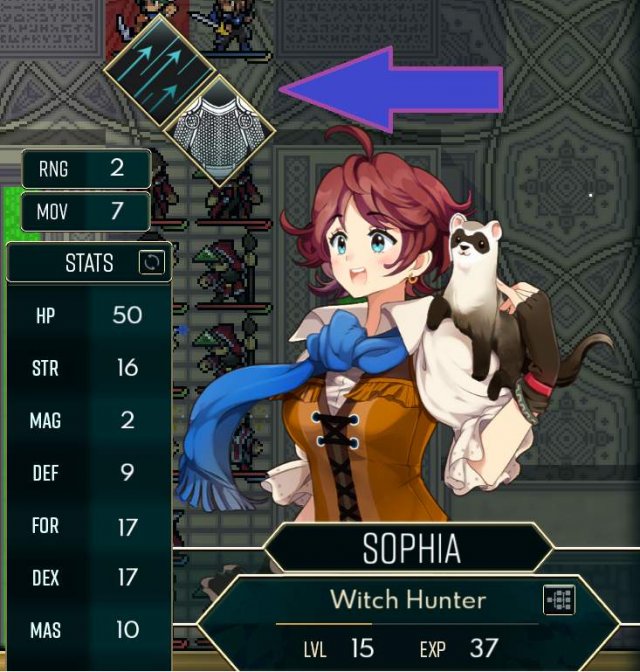 As pointed out by the helpful arrow (whoever put that there must be super nice)! These are your damage type and armor type. Damage Type is on top, while Armor Type is on the bottom. All of it is dependent on the class. As Sophia is a Witch Hunter, her Damage Type is Projectile and her Armor type is Chain Armor. These can be checked via hovering over them with your cursor within the menu. You can also check these on the map by hovering over a unit with your cursor. 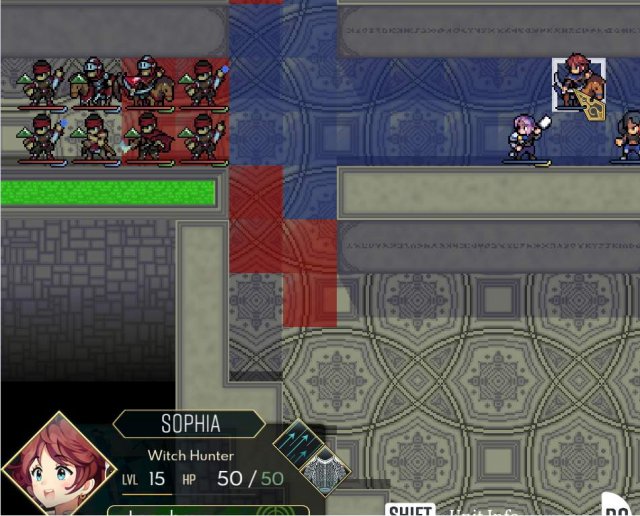 I won’t get into the Damage and Armor types of every class, since I’m sure people much smarter then me have already listed those out and you can find them very easily. What I will tell you is that, when ranking up, it’s worthwhile to check to see how the Damage and Armor type will change upon promotion. Class variance is importance, folks, not just in TF2! You can check these out right here on the promote screen. 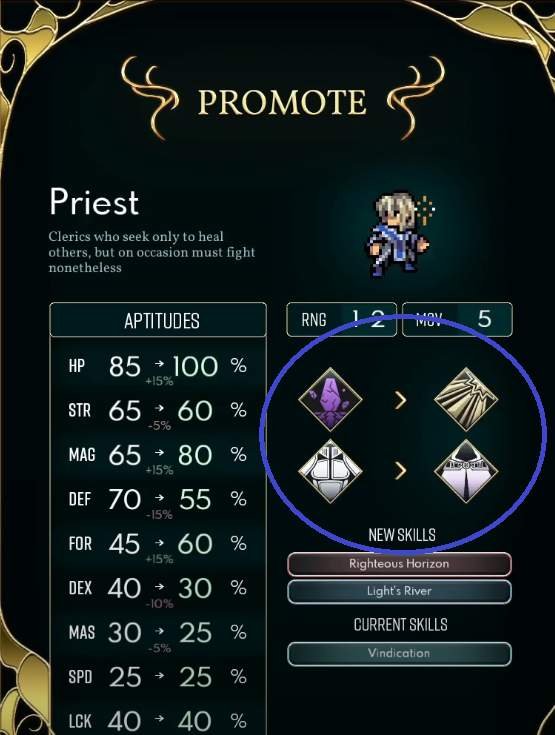 Hint: It’s in the blue circle.

With the basics out of the way, let’s delve into the actual meat and potatoes of how the heck these interplay with each other.

What Effectiveness Is, and How to Check for It

With all the boring pre-amble out of the way, let’s actually break down what this stuff means.

First of all, you can quickly surmise what your opponent is weak too via the map screen. When you hover over a unit, you can check the little arrows that pop up on the top left of the opposing units to see whether their damage will be strengthened or weakened against the enemy in question. Green ▲ means they will deal more, red ▼ means, shock of all shocks, they’ll deal less. This can also be viewed for the enemies as well. 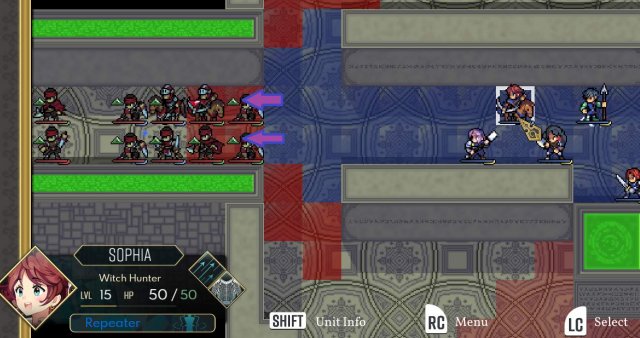 Secondly, weapon effectiveness only applies to pure damage. Any other stat changes, such as accuracy, dodge, crit rate, etc is handled by the weapon system. In other words, effectiveness purely deals with damage, nothing else. As an example here, despite having an advantage against the former enemy and a disadvantage against the latter one, Aurima still has better accuracy against the lackey he has disadvantage towards, even when choosing the least accurate option. 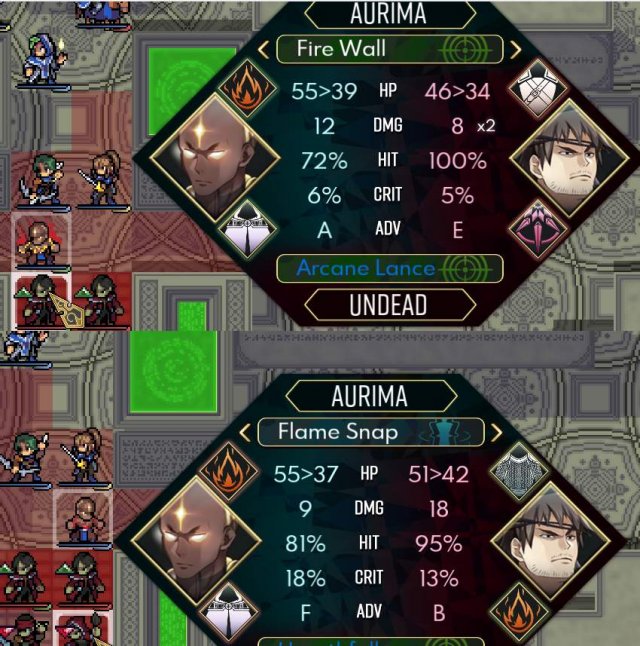 Side note: I missed the more accurate attack on taking that screenshot lmao

Fourth, let’s discuss what Mastery does to affect these values. To put it simply, the higher a unit’s Mastery is, the more effective type match-ups will be when they are favorable. In mathematical terms, mastery gives a percentage decrease to the defensive value before the bonus is applied. The letters from the pre-battle screen are essentially meaningless, they just exist to show how good a match up is in the units favor. To TL;DR it even more, if you have better Mastery and a higher letter, your Advantage bonus damage will be increased.

Anyways, with all this out of the way, let me show you all a quick chart I made to concisely illustrate what is good against what.

The Chart of Advantage Matchups 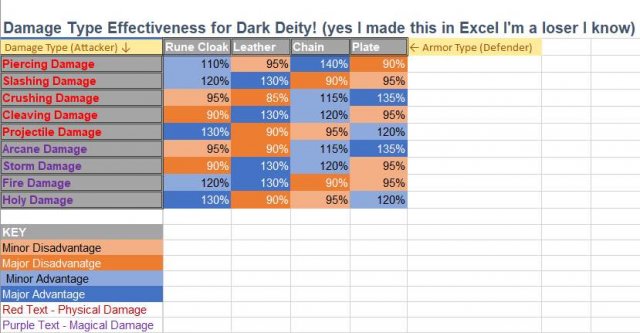 Note: this chart is rounded around a generic 100% of damage based on Attacker’s Power – Defender’s Defensive Stat, [the Defensive Stat being chosen via the Damage Type in question being Physical or Magical] in other words anything above 100% is bonus damage and anything below 100% is subtracted damage.).

Anyways, this is it for the “tutorial section”. For the last segment, I want to quickly discuss what I feel is lacking about this system, and possible ways it can be fixed on the off chance a developer of this game reads this.

My Issues with this System, and Possible Solutions

I’ll just list them in a quick numbered list, in order from most important to least important. I don’t think all of these are necessary changes, or every change I’m proposing needs to happen, or even in the way I’m describing them, but I think any one of these would help newer players get a grasp on the system.

The number one issue of this system is simple: the game doesn’t explain how it works, and the few tools that exist to help you understand are not clear enough or don’t explain the full system. My solutions are tailored to making the system easier to understand or easier to memorize to cut down on the confusion as much as possible without sacrificing any of the core gameplay of the system.

This could circumvent having to keep track of a chart by displaying all the relevant information to the player. Or…

This is a comprehensive guide detailing a way of getting for all achievements in the game. If you have never played this game or are just hunting for achievements, this […]