There is a method that people tend to overlook on Steam, to join each other in games that relies on a ‘friend list’ system for the Steam API.

Guide to Join a Multiplayer Session

By joining the game’s Steam Group Chat, you can view other player’s activities in the game “as if you are on a friends list”.

Now if you host a ‘steam game’ using the ingame tablet, you become joinable by anyone in the Group Chat, and vice versa you can ‘join’ anyone ingame.

The Steam Group Chat channel also includes the ability to create your own voice channel for anyone needing to use voice ingame. 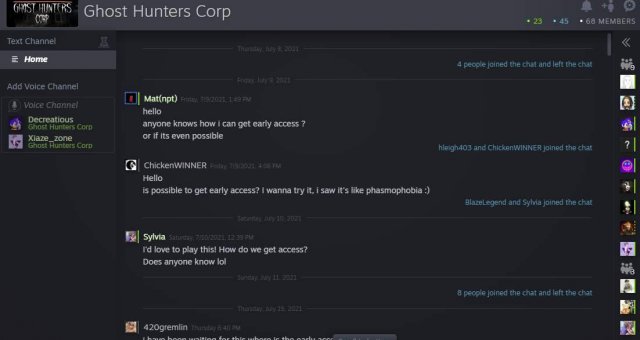 Alternatively you need to go into the Community hub and click on the Group Chat function on the top right.

You can still use a Steam Group Chat function to invite other members you see in the official group chat, just create your own private group and control it since it has moderation and administration controls.

After you created your private group you can make a invite link to invite other members, or you can privately message them via group chat.

You can use the LAN functionalities of this game to join each other using Direct IP, it just requires one person to act as a host, find his IP address on the internet and have his friends join said IP by entering it in to join. There might be requirements like port forwarding and stuff to make this work though, and software such as Hamachi can also work with this, but has greater latency than Steam Friend API / Group Chat connections.

I created this guide so that I had a cross reference between all the types of exorcisms and the evidence and ghost types that they are related to. Sometimes you […]