The purpose of this guide to assist those who might be trying to unlock the Ottoman Empire achievement but struggling to determine the best or quickest way to do so. Sitting at the crossroads of Europe, Africa, and Asia, Turkey is quick to make enemies with ambitious countries hoping to expand across continents, but hitting the right countries in the right order and building alliances early on makes the process a lot easier. That having been said, let’s get into it.

Newer players tend to only look at the political map on each playthrough, always at the cost of learning essential information about the provinces both in their own country and in their neighbors. One of the first things I always do is look at the terrain map each time I start so I know where to best build farms and workshops, where to garrison units, where to recruit units out of, where to attack during an invasion, etc. 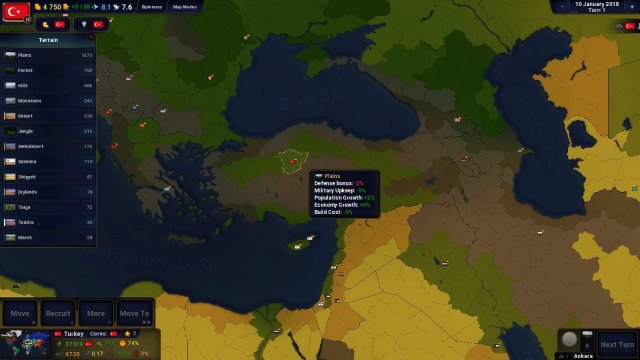 So let’s take a quick look at the terrain of modern Turkey. You’ll notice it’s characterized by hills and mountains stretched along its coast with the Black Sea to the borders with Iran and the Caucus to the east, beneficial to defense against any incursion from those directions. To the south you’ll see plains regions in and around Ankara, stretching as far east as Bingol and Siirt. This is where you’ll want to build the base of your economy during the early game.

Plains are good. You want plains. The more plains provinces you control, the better. Plains are not only the cheapest place to build anything from farms to universities in, but give you the fastest population growth, which means more workers and soldiers. That brings us to the population map. 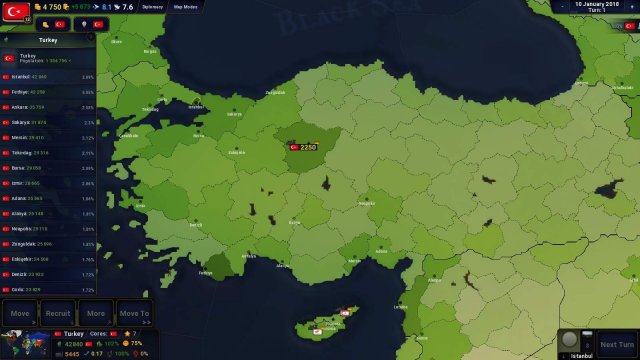 Darker areas mean larger populations, with the most populous areas of Turkey being Istanbul, Fethiye, and Ankara (in that order). There are the areas you’ll want to recruit your armies out of first, but be careful not to withdraw too much. Soldiers are always recruited out of the population, which means the more you recruit, the fewer workers you’ll have left in that province or city. The fewer workers you have, the less you’ll be able to keep your economy afloat and the greater the risk of that province/city becoming unstable and falling into secessionist uprising. Maintain a stable balance between military and economy and you’ll be fine!

With the geography overview out of the way, let’s get to conquering!

Well, actually, the best thing to do first is to invade the island of Cyprus. This’ll be a turkey shoot, since the game recognizes the existence of the Turkish Republic of Northern Cyprus, hence the island being divided into two provinces. After you’ve taken a few turns to build a dock, farms, and other infrastructure, recruit a few thousand units out of Fethiye and neighboring Antalya, and send them to annex the island immediately. It doesn’t matter which half you take first.

After that you’ll want to quickly take Bulgaria. Take maybe 6~7000 units and invade via their south-east most province and capture their port there. Maneuver around the hills while keeping a rear guard behind your advance army to defend the provinces you’ve already taken. Units acting as rear guards would best be recruited out of Istanbul. Capture the hill provinces after taking Sofia and force Bulgaria’s surrender.

World War 3 has basically started at this point, and it’s likely Romania will attempt to annex Greece before you do. Now that you control Bulgaria, station troops in the hill areas of Blagoevgrad and Kardzhali while also constructing watch towers there to uncover how many Greek forces are garrisoned in Alexandroupoli and Serres.

Recruit a few thousand units out of the Turkish cities of Edirne and Tekirdag and push through the corridor of north-east Greece. This is a diversion. You should organize your main attack in a direct assault on Athens and the island of Crete, using either whatever forces you have leftover from the annexation of Cyprus or those recruited from Fethiye and Antalya. 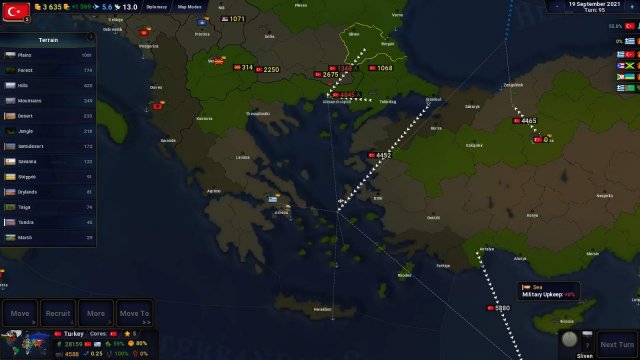 Greece will have moved the bulk of their forces north and will be unlikely to mount an effective defense of their capital. Remember your geography. Hill and mountain provinces grant a defense bonus of 3 and 5% respectively, and with your armies holding them, whatever counter-attack Greece might attempt to recapture them will be doomed to fail. After they’ve exhausted their units clashing against you in the hills and mountains, move into the plains for a swift victory over Greece.

War weariness is an important thing to look at in this game, as it also contributes to instability. After annexing three (or four, depending on who you ask) countries, now might be a good time to consolidate control over your new territories. That means not only assimilating foreign populations into the Turkish nationality, but also building more infrastructure driving your economy and tech research. Below you can see how I set mine up: 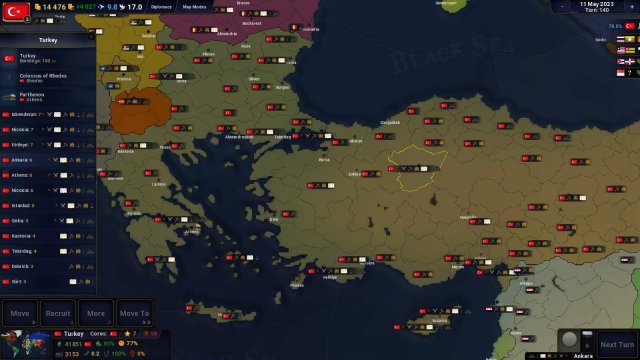 By turn 150 or so, you should be ready to hose down the former Yugoslav states, starting with North Macedonia and Albania. Alternatively, you can issue an ultimatum to them that they become your vassal under threat of invasion. If so, you can call on them to aid you in invading Serbia, or even invading smaller states such as Kosovo and Macedonia on their own (just make sure you annex them later). Some countries, such as Romania, do not need to be annexed entirely, as you only need a few of their provinces to satisfy the territory requirement to form the Ottoman Empire. It is, though, a good idea to release Romania as a vassal to act as a buffer state between Turkey and aggressive/powerful European powers like Germany and Russia. Do the same with Croatia until you’re ready to annex the required provinces too. 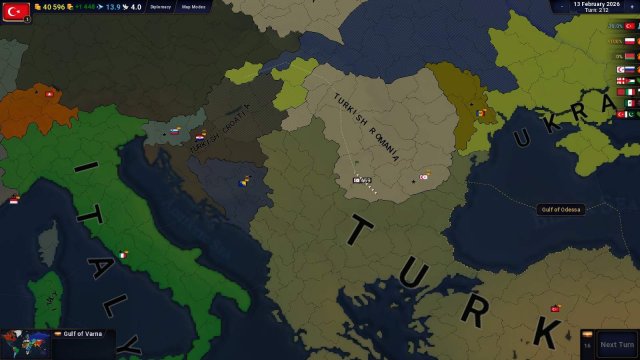 Beforehand, you should focus on taking territory from Ukraine and Russia, particularly Izmail, Odessa, the Crimean Peninsula, and Anapa. If Ukraine isn’t already at war with someone (Russia will probably have already invaded by this point), negotiate with a nearby country to go to war with Ukraine. (preferably to the north, such as Belarus, so you can come in from behind). I would recommend deploying a force of 15~20,000 troops to land at Sevastapol and take Crimea, and a similar force to strike at Izmail. Push until you control the Gulf of Odessa and the whole Crimean Peninsula, then negotiate a peace agreement separate from the other invading country, keeping everything you took. Do the same against Russia, while negotiating an arrangement with China and Kazakhstan to declare war against Russia.

During this time, it’s almost certain other countries will interpret your European campaigns as a distraction from West Asia and attempt to take advantage, notably Iran and Egypt. If at any time they declare war against you, stop what you’re doing and deal with it. If you can’t adequately defend yourself, vassal states you may have in the Balkans will take notice and try to declare independence, immediately going from being useful buffer zones to potential adversaries.

By turn 400, this should be what your territorial extent looks like: 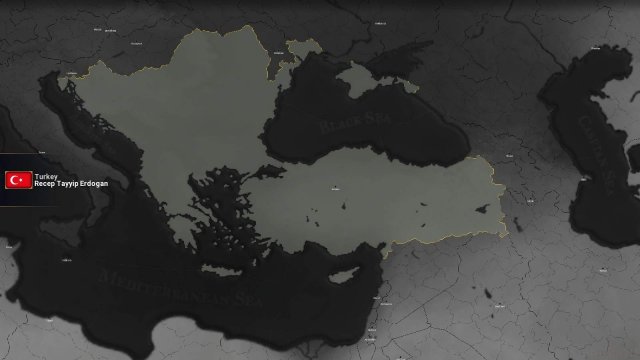 Now that Europe has been taken care of, it’s time to push into the Middle East. Negotiate a deal with Israel for military access and mass an invasion force of around 130,000 troops along the border with Syria. If you haven’t done so already, construct castles so nobody catches wind of what you’re doing. We’re going to knock both Syria and Iraq out at the same time. 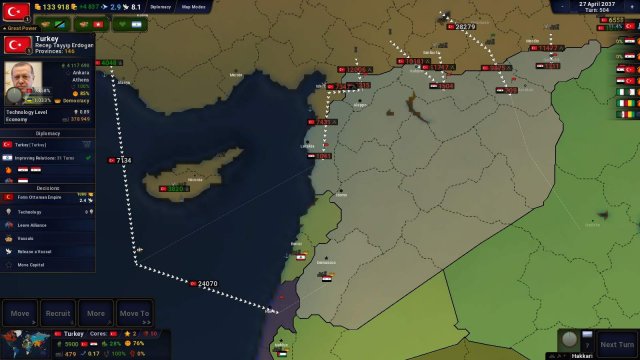 Avoid attacking Mosul and Erbil directly, as they’re both in hill provinces. Set a route for about 20,000 troops to make their way to Haditha by way of eastern Syria, forcing the Iraqis garrisoned in Mosul and Erbil to come out and fight you there. You are likely to lose fewer men defending the plains than attacking the hills. At the same time, more than 30,000 troops should be making their way across the Eastern Mediterranean to Haifa, Israel to launch a cross-border attack on Damascus. Once Damascus is under your control, move half your forces to capture the semidesert provinces spanning from Homs to Mayadin. Then Hold.

Capturing desert provinces so soon puts unnecessary upward pressure on costs associated with upkeep and movement. Now, gather a force of maybe 70,000 and move to capture Tikrit and Ramadi before finally pouncing on Baghdad. By this time, it’ll be safe to mobilize units from Turkey (Siirt and Hakkari) to sweep into northern Iraq. Keep your focus on capturing plains provinces until you’ve reached Basra on the border with Kuwait. Afterwards, proceed in any way you see fit to take total control of Iraq and Syria. Once they’ve surrendered and you’ve negotiated their total annexation, it’s all downhill from here on out. Use the same strategy of invasion/vassalization to deal with Lebanon, Kuwait, Israel, etc.

That you did with the Balkan countries, and they’ll fall like dominoes. Make sure to also take time to consolidate control over your newly conquered territories and build farms, workshops, universities, barracks, supply camps, etc. in geographically advantageous areas while assimilating them into the Turkish nationality.

The quickest way to deal with Saudi Arabia is to attack in conjunction with either Yemen or Oman. When you invade Egypt, don’t attack from across the Sinai, as it’s entirely desert and semidesert. Instead, launch a direct attack on Alexandria and Damietta with the bulk of your army having been recruited from Cyprus, then move onto Cairo and seize all the provinces along the Nile River until the Egyptians are confined to the desert and semidesert regions, putting them at a significant disadvantage.

Once you have what you need from Saudi Arabia and Egypt, make peace and declare yourself Caliph and ruler of all the Islamic Ummah, because you have just rebuilt the Ottoman Empire! 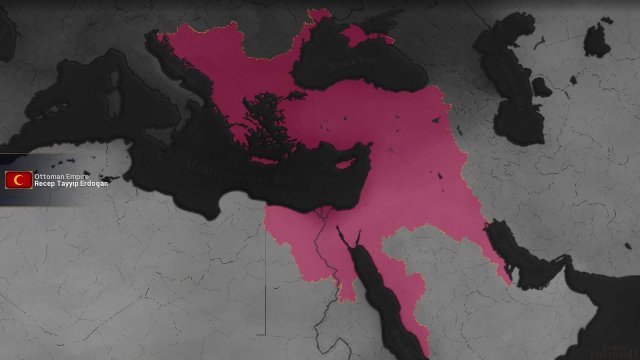