Are you having troubles on the Ceremonial Hunting grounds? Then here’s a guide to help you through it!

This guide will contain spoilers for how the mission goes if you haven’t got to the end yet.

Here is a list of items that you should use for the mission.

There’s only 2 enemies, but it’s still helpful to know about them. Technically there are 3, but I’m counting the Floran sniper as a Floran.

A Floran. Like the ones at villages. This time, they’re weaponized, and armored. They’ll attack you on sight. 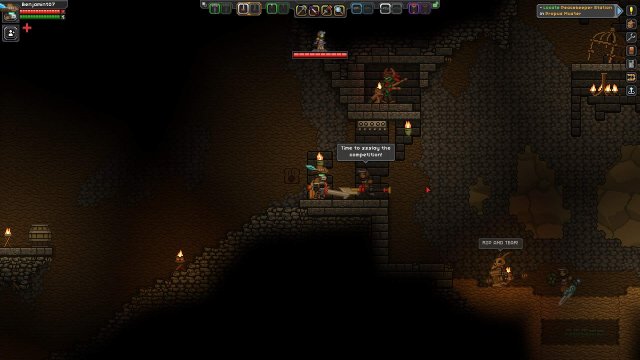 They’ll attack you with their weapon. They can have hammers, spears, and swords.

Also a classic Floran. They have a gun, and a unique armor. They’ll attack you on sight. There aren’t many of them. 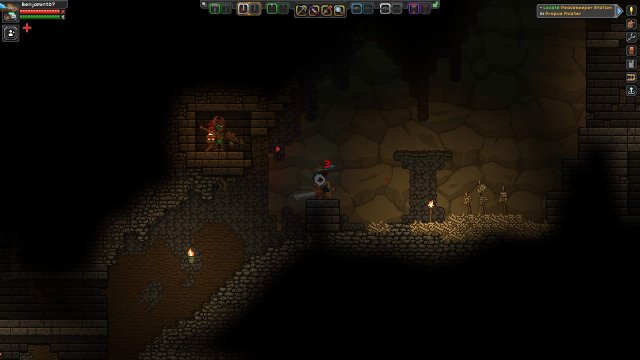 They’ll shoot you with their gun. They all have the same thing.

A small version of the Ixodoom. Doesn’t have the same attacks, and is a child like S.A.I.L. says. 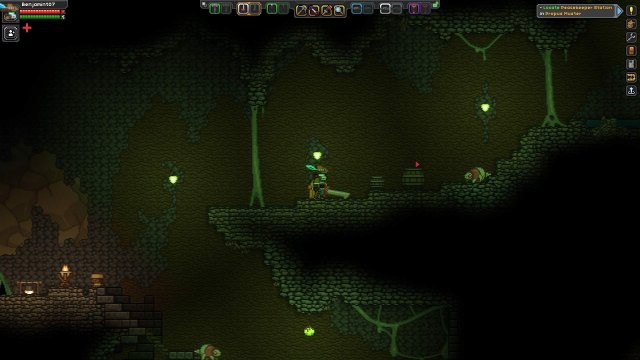 They’ll attack you by jumping at you. But they can deal damage when you touch them. 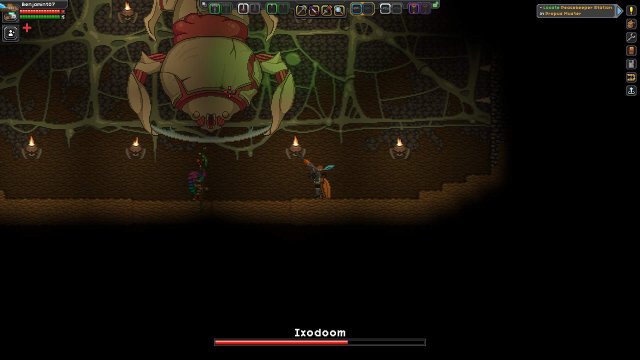 This can be dodged by just moving out of the way. 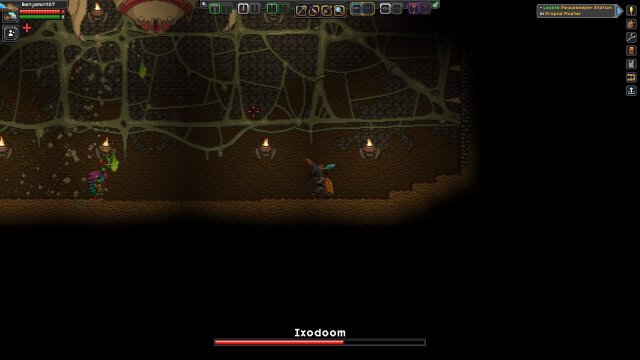 This can be dodged by moving to either end of the room. 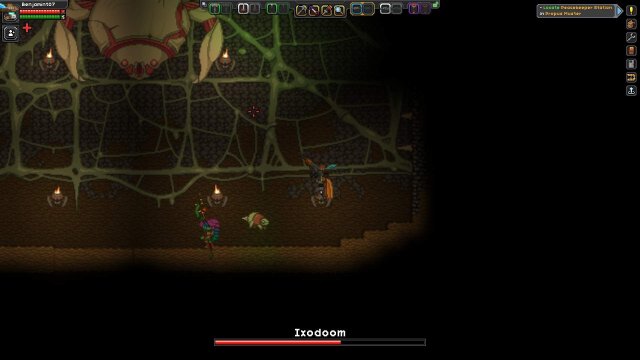 How the eggs look: 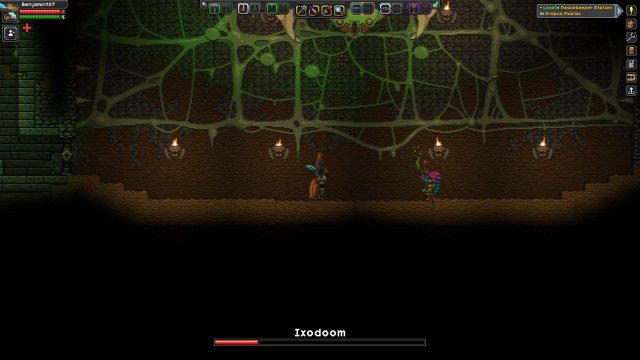 You’ll spawn in an area that looks like a jungle. What you’ll want to do is head right, and just continue walking that direction. Eventually you’ll meet some Floran. You can talk to them. They’ll be making remarks on the hunt. At least one of them will be talking about someone named “Nuru.” She isn’t important right now, but you’ll meet her later.

Anyway, you should see a structure with a gate on both sides. Open the gate, and there’ll be an elevator. Activate it to get into the hunt area. You can jump off the sides if you want. There’s water at the bottom so you won’t take damage or die.

Now you’re in the hunt. Be careful. Keep heading right, once again. Eventually, you’ll find a gate. Flip the switch below the platforms in the puddle. You’ve probably noticed a Snaunt or two. They’re the enemies that spit a toxic substance at you. You can kill them if you think it’s necessary. Anyway, jump across the platforms and reach the end. Double jump can help here.

After you’ve reached the end of your first obstacle, you’ll meet Nuru! She doesn’t have anything necessarily helpful to say, but you have to listen to her to continue on. Now, you’re going to see 2 directions. I advise going the bottom path, but it’s entirely your choice. I’ll be talking about the bottom path for this guide.

At first there’s just 2 poison jumps. If you don’t fall in, you’ll be OK. But if you do, that’s fine. you can just heal up and continue on. After the first, you’ll probably see a weird creature. You can kill it. Now, time for a shortcut! Get out your scanner, since it has a flashlight. Or, if you have a flashlight, get that out. Put it to the right. If you go over there, and put the flashlight up, there’s a bunch of platforms! Head up there.

Now, head to the right, and get your parkour skills ready! Jump over the poisonous pond, and fight the Floran waiting at the end. Head right, and you’ll notice a picture of a falling boulder. It’s like a caution sign. And be careful! These do a lot of damage. Head forwards and dodge the boulders.

Now it’s time to say hi to Nuru again! You’ll see her behind some bars, but she won’t talk to you unless you’re in the area with 2 gates. She sasses you and opens the gates so you can continue. Deal with more poison jumps and head continue forwards. You’ll have to deal with more boulders, but you can use platforms to dodge them. You can only get up them if you have the double jump ability.

After that, you should be at an arena. Fights with the Floran can be a bit difficult, so try to knock them back into the arena with a good knockback weapon. Now you have to dodge the shots from Floran snipers. When you do, you’ll get a checkpoint! There’s another Floran sniper up ahead. After you kill, or pass the Floran, there’s a switch. Flip that, and you’ll have reached the boss!

Nuru will help you with this fight. And she is actually needed to finish the battle. You can’t really do anything but dodge the attacks at first. She’ll shoot at it until the shell is broken. Then it’s your turn. Use your weapon to fight it.

After the first time it grows it’s shell back, it’s eggs will start hatching, and the kids will attack you. This can add a bit of an extra challenge, but there won’t be that many until after the second time. Now there’s more eggs, and more minions. These can overwhelm you, so take care of them before you fight the boss.

After you complete the fight, drop down into the hole that the Ixodoom makes for you. Follow the path, and then you’ll reach the surface, with more Floran. Head right to the pedestal. It has the Floran artifact! Congratulations, you got your first artifact! Collect it, and head to the right. Again. Open the chest full of goodies for you to enjoy, and head to the outpost. 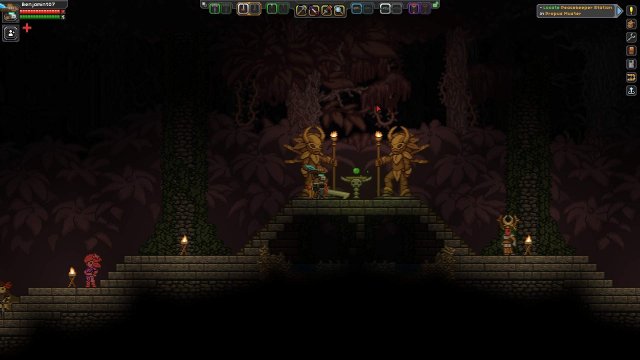 There are a lot of people including me who use “Green’s dye suite”, but personally i never understood the guide they made for making your own custom palette. So if […]

The Dantalion mission is the last job you have to do for the Peacekeepers, and is a part of the endgame. However, I noticed the Swansong boss fight is a […]

Starbound – How to Expand Your Crew

Ever had trouble expanding your crew? Did you ever toil away at a merchant’s quest, only to find they were unwilling to join you on your adventures? Well, here’s how […]