A quick list of a few things you can use to break the game to your advantage.

Tips and Tricks to Beat the Game

To break a game such as DSD you need to understand how it works and what angles you can exploit to break it:

First there is a big chunk of randomization in this game, for instance the layout of each derelict will be generated when you first set foot in it, so having additional saves before entering the derelict may allow you to chose a more interesting layout. This layout also includes the settlement (if you have the DLC) and items in the settlement, so I would advise players to make extra saves (save to file) before entering the derelict so you can get “the best” out of the settlement (usually you want some consumables that give extra stats or skill points).

Also the loot inside any “search” area is randomized when you first open it, so you could in theory spend a few reloads to try to turn every loot cache into a treasure trove: 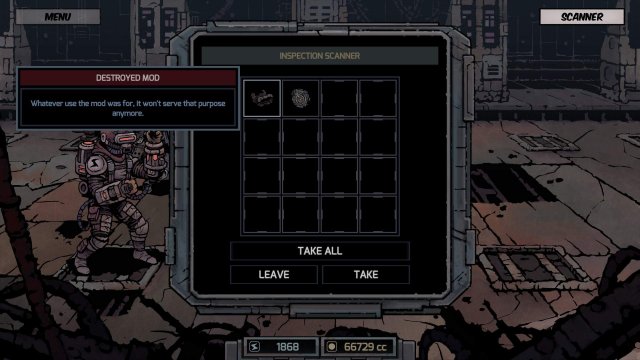 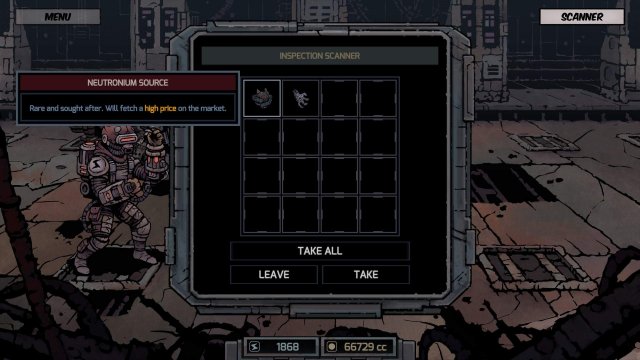 Of course spending too much time doing this and you will probably bore yourself to death.

Now unto the “real” subject: Combat

There are a lot of combinations that are very fun and rewarding to play.

for instance robot making technician + leaders that will use party wide buffs that will affect every robot like inspire, party wide buffs are stronger the more people they affect and with a couple “roboticians” it can get out of hand quite fast. Robots also provide free “tagrets” for enemies to attack which is less risks for your own party.

The issue with roboticians is that they lack burst, and from my experience you want to wipe the enemy team before they get to act (that means using active shields with initiative on them to get the first moves and then unleashing ungodly amount of damages on enemies)

You can also stack a lot of “extra burst hit” (found on energy blades and its mods, power gloves and its mods, energy blades and its mods and kinetic shield mod (and probably some tool mods as well I guess) )to turn a simple ability like double shot (2 x 65% damage) into a monstrous (8×65% damage) which should take out almost any enemy in one hit (note that some other skills like “scrappy bomb” can also get extra burst hit). If you combine this with items that give %chance to stun on hit you can usually stun whole enemy teams even if you don’t kill them. The issue is that burst builds are usually weak against armor, so you might want items with acid or anti armor effect (and any on hit effect in general)

But if you truly want to break the game you have to look at the stats that make it tick:

First you have a “general” resource that is energy, energy is vital and a lot of build actually advise you on taking portable generators or energy cells to allow longer expeditions. This is totally useless if you have a technician, because having a technician (level 2 and more) will allow you to have unlimited power, I mean energy.

Thanks to this passive ability: 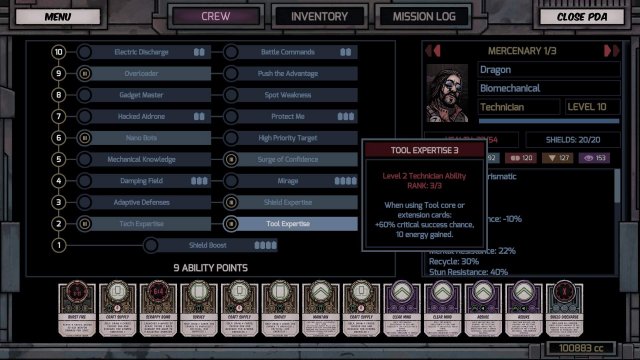 This ability is what makes the technician the (potentially) most broken character:

And this is what we can use to break the game:

Indeed thanks to the implant systems (if you have the DLCs) you can get this little thing: 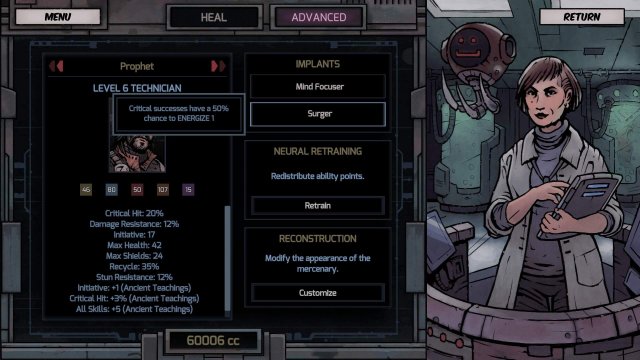 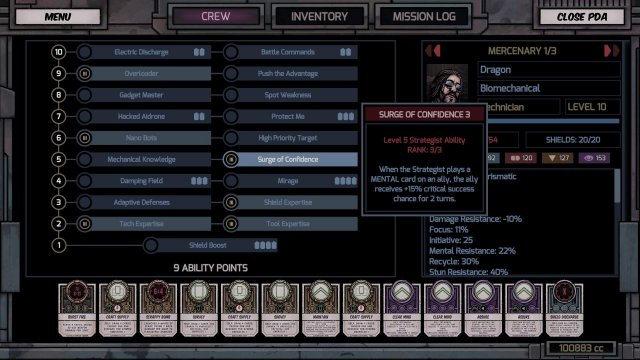 Surge of confidence, that allows any of your mental cards to add up to 15% crit sucess chances. 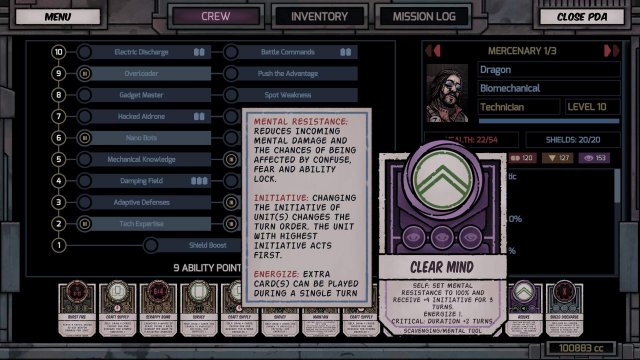 and you can get yourself easily to 100% crit chances with tool cards, since Clear mind always energize you can play a couple of them without issues, and since it’s a card that can crit, you can actually get extra actions from this. 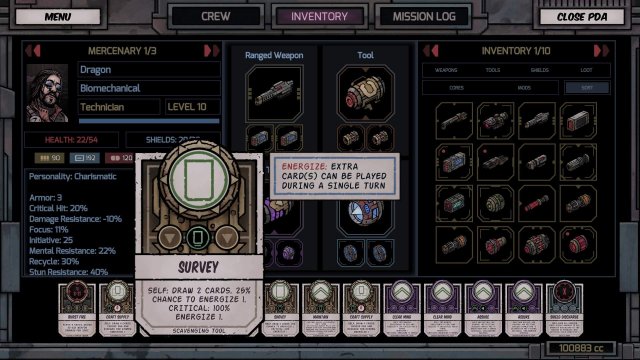 Which would crit every time allowing you to have 1) infinite draw and 2) infinite actions.

Then you can simply spam a buff card like assure 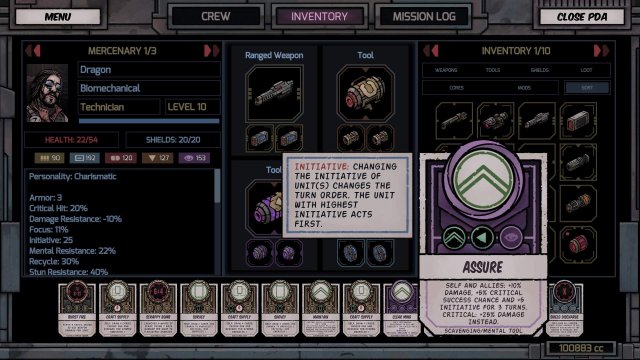 (while redrawing it each time with survey) and you can get unlimited damage even on a low end card like scrappy bomb. 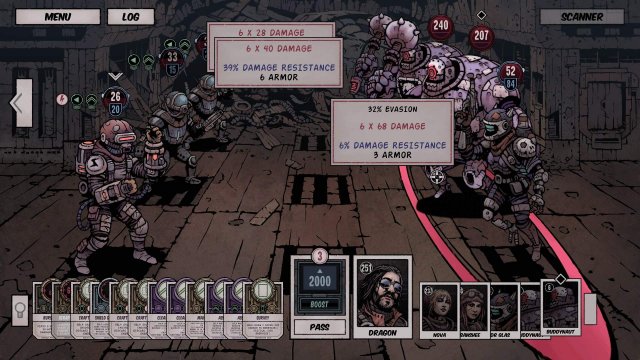 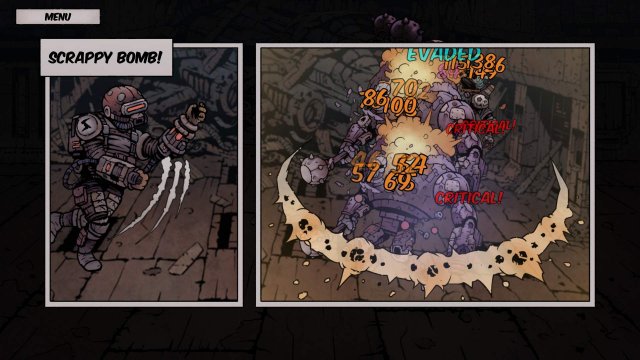 and during all these actions you have been regenerating your energy because you are playing tool cards, how neat is that.

While this is probably the “strongest” combo out there there are actually a few others, probably more easily accessible out there: 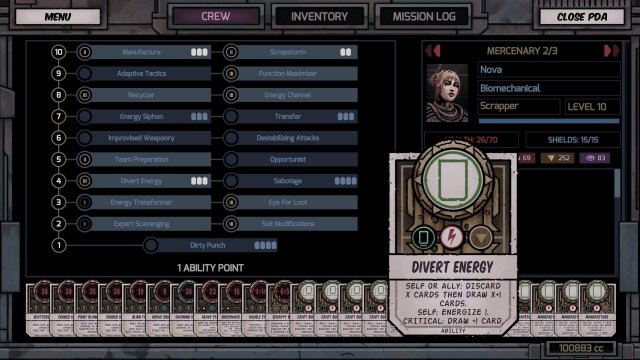 You can target yourself with divert energy to dicard + draw and every time you’ll get a stacking +12% damage buff (note that the buff doesn’t look at the number of cards discarded, 1 or 10 will net you 12% as long as it’s a single effect doing it).

Since divert energy will always energize you can loop this as long as you want (and since it draws X+1 you on’t lose cards and even get extra draw on crits). 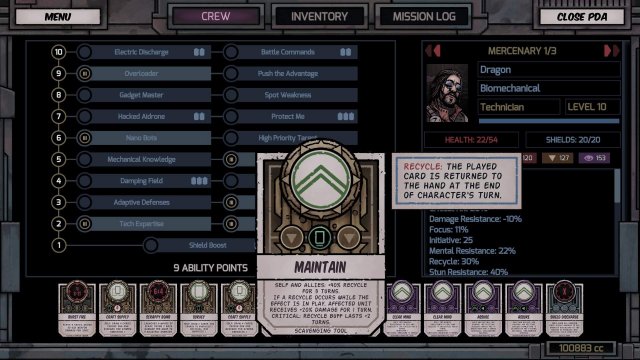 Maintain will give 40% recycle to every member of your team, and every time a team member recycles a card they will get a stacking +20% damage bonus.

Maintain can be used with any of the previous combos to add some stacking damage buff and is actually the easiest card to break, heck you don’t need anything to break this card you can do it as soon as Level 1.

You just need to have a “perpetual engine”, something that you can play over and over again that wont cost you cards or actions in the end, the easiest card to combo with this is Craft supplies (a default card on scavenger tools, you start with that usually). 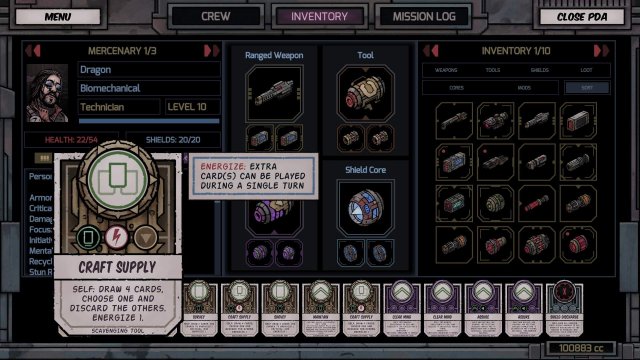 If you have a couple or more craft supplies you should be able to get a craft supplies with another craft supplies and keep going, and every time you play one you have a good chance to recycle it and get 20% damage and in the end it will amount to quite a bit (although from my experiments maintain seems to stop triggering if it triggered 15 times in a turn, at least if no other other buffs were applied). 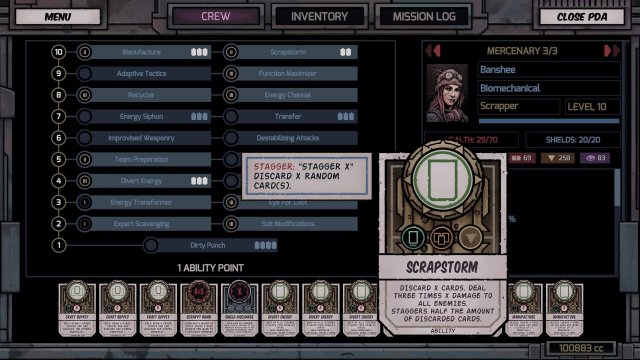 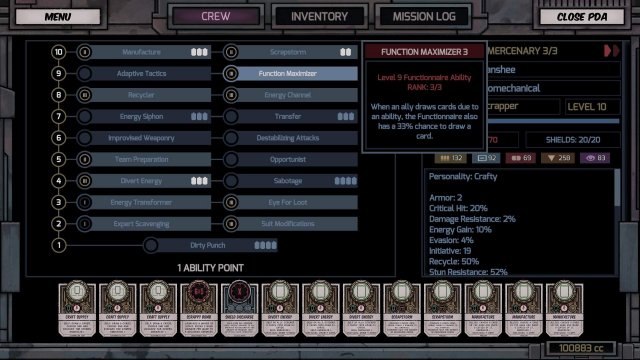 Simply have your 2nd or 3rd guy have a very large deck (lots of cards) and let him draw from function maximizer while previous party members are looping and you will have around 20 or so cards to discard with scrapstorm allowing for general wipe of enemy forces (especially if you have stacked a dozen of Assure buffs). There are probably a few other combos, usually anything that draws more cards than it costs or gives more energy than it costs can potentially be broken.

This is a guide to explain simple mechanics to allow new players an easier first experience, and then learn by themselves to master the game. ContentsIntroductionBasicsTeam BuildingDeck Building Introduction The […]