A good design of a fleet depends on understanding of tactical challenges resolving them with purposeful ship composition and design. This guide will describe my approach and it’s rationale and will point to another ship design guide, that I have not used to design by current fleet (read it just today), but II think it’s full of very good tips that will augment this so II want to recommend it.

Guide to Design of a Fleet Depends

A good design of a fleet depends on understanding of tactical challenges resolving them with purposeful ship composition and design.

This guide will describe my approach and it’s rationale and will point to another ship design guide, that I have not used to design by current fleet (read it just today), but II think it’s full of very good tips that will augment this so II want to recommend it.

The Sevastopol design we have as default in the game does not really work for me. The thing is ridiculously big, slow, thirsty, costly and despite it’s huge armament and armour actually quite fragile, not to mention easy to hit. With just 1.1 thrust to weight ratio, damage it’s Achilles heel – engine and it will quickly fall down. It also slow the whole fleet to the point, it cannot really escape enemy Strike Groups or keep a good operational tempo. It’s purpose is quite hard to me to decipher.

What is purpose of flagship to me?

It is the central piece of the fleet, a base all other ships will operate around. It will dictate overall fleet speed and thus ability to maintain distance from enemy and change area of operations. It is most precious ship, should not get into dogfight. Therefore primarily a support ship. It can provide:

Does it make sense to be all in one ship? Can we create it so it is economical compared to splitting those roles in between multiple ships? 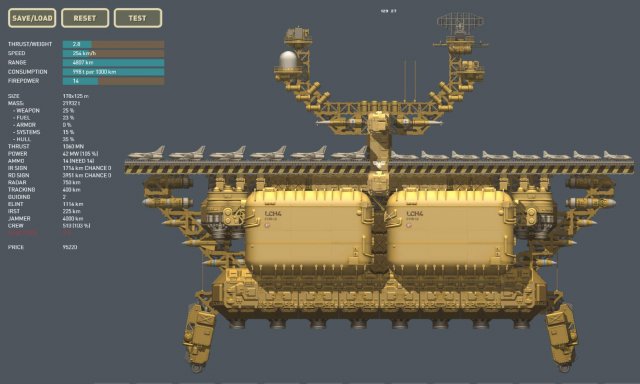 I have set to myself following contraints:

For result see the screenshot. The first iteration Mk.1 I am playing with is cheaper at 82K and with speed of 275km/h with 5188km range and 925t per 1000 km consumption. It has one less of each aircraft type and just 8 tactical missiles. Mk.2 is just to speed up decimation of enemy groups at marginally higher costs.

The strange Y shape tower is to allow for two unobstructed primary sensors. It also serves as a carrier of anti-air missiles that I was not forced to use much as I always kept some interceptors in reserve.

I never actually deployed the A-100 missiles, they probably make more sense on standalone missile corvette due to low range. Other than that I do not see a good reason to split the roles here.

With this you can always outrun enemy major forces with enough margin to comfortably refuel unless you are reckless and bump into them with tanks empty. From afar, you can defend from missile and air strikes and cripple enemy force with your own. II tend to lead with two rocket aircraft followed by ideally heavy bombs to deal with large enemy ships.

Now we need something with a punch to take care of major enemy ships that survive strike or otherwise need to be dispatched in person.

Since you will mostly face different compositions of ships, I augment heavy guns with some medium and low caliber ones. 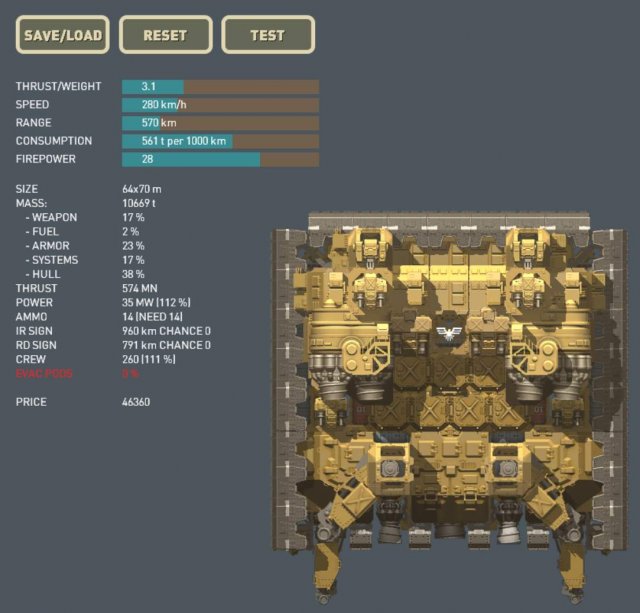 2xThe 37mm guns help swatting small ships and more importantly defend against missiles that catch wrong flare, rockets you do not manage to avoid and even some super heavy artillery shells.

4x100mm are my favorite universal weapon. With proximity fuse, it is a great defensive weapon against airstrikes and missile strikes.

This ship has a very short range. A huge fuel storage would weight it further down, increase size and thus armour required and big fuel tanks block turrets. It is always accompanied by a tanker, except for final approach.

You need a ship that can quickly chase enemy transports, capture lightly defended positions and augment the Destroyer when necessary. You need more of those so you can rotate them when damaged or fatigued. 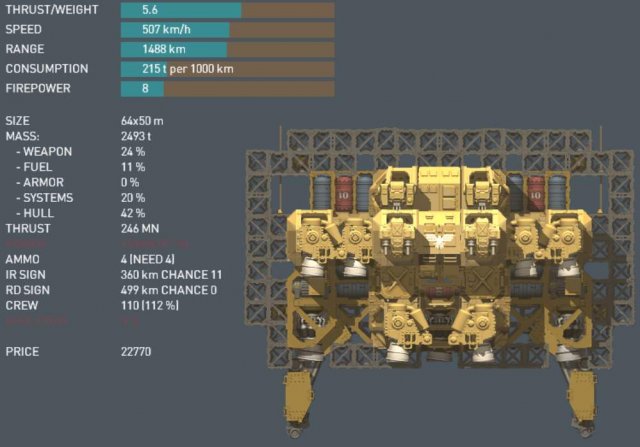 This is the oldest design here, updated after I realized D30 engines are vectored. Original was 5xD30s + 2xNK-25 versus 3xD30S and 4xD30. It can be also 3xD30S, 2xD30 and 2xNk-25 for 6 thrust/weight at 243t consumption. The newer one allows for better protection of the bottom. I made mk.2 with armour instead of reinforced hull protection and 4x100mm guns, that is slower, has less range and is slighly less maneuverable and I tend to prefer to use this one. There can be some tweaks and various setups trading of one way or another that I will perhaps optimize but is really the workhorse of my fleet.

Recon needs to be fast with good range, but needs no guns or armour, just sensors.

I think there is a synergy, if the main tanker is the flagship.

What are the roles we want covered:

I ma still experimenting with optimal designs, here are three I came up with. 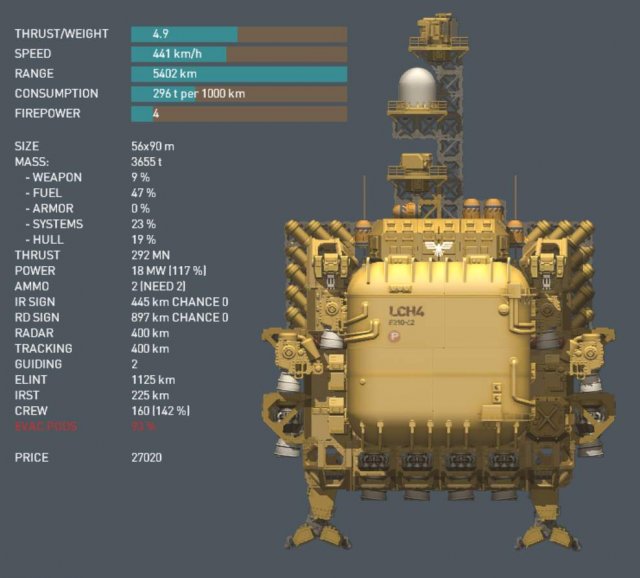 Oldest design, this one is most specialized in providing support to attack ships. It has comprehensive sensor suite, relatively large fuel tank and some defensive weapons, meant mostly against missiles and aircraft when landed on crash site. In it’s latest revision it quite matches speed of later Kestrel. 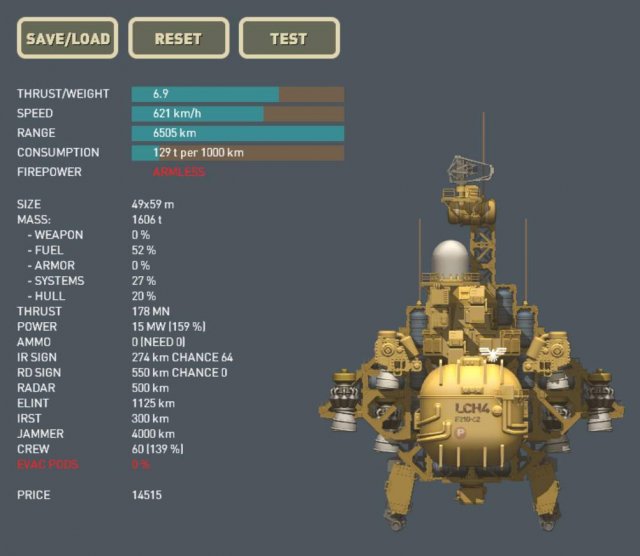 Owl s quite costly to have multiple of them. This is an lighter variant that has much more speed and a bit more range that can still support small attack groups (1-2 Kestrels) or effectively scout and pick up intel.

It sports a jammer which it could use to support fleet or fly somewhere and lure enemy there. In practice I did not need to use this, but it might be useful if you use the default flagship and need to lure enemy SG away. 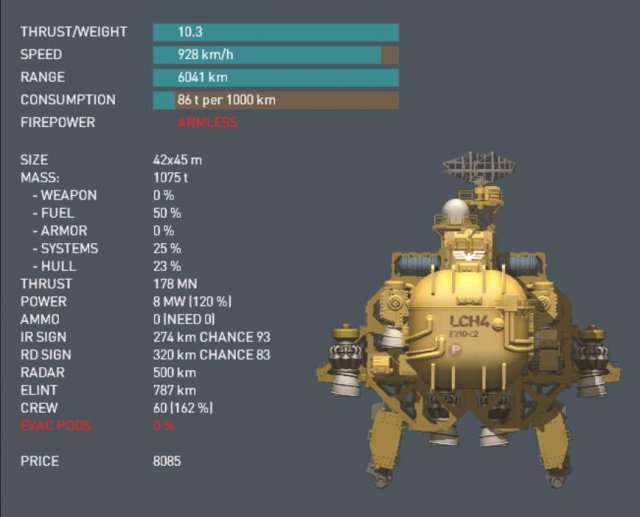 This is something I have not used yet, but it is the cheap, light scout/intel picker.

Tired of pillaging radiorooms for a worthless piece of paper? Want to pinpoint that juicy trader as soon as you get his transmission? Don’t worry, this guide will teach you […]

A quick cheat to make infinite money, if you feel like being a filthy cheater. How to Cheat I have no funds and I must liberate this country! Have no […]