An easy way to build up a strong Base defense to control the attacking waves in the game.

How to Build Strong Base Defense (Easy Method)

This made it very simple to figure out a way to controll them while they attack.

In this case all i needed at first was a good built Wall. Then i upgraded it to auto-Defence with the Bunker and later with the Lightning firing Tesla-Towers.

And additional to that i got the Buff from one of the Villagers maxed out to get a (damage done to buildings) reduction.

You can use the same method if you want and see how it works out for you. 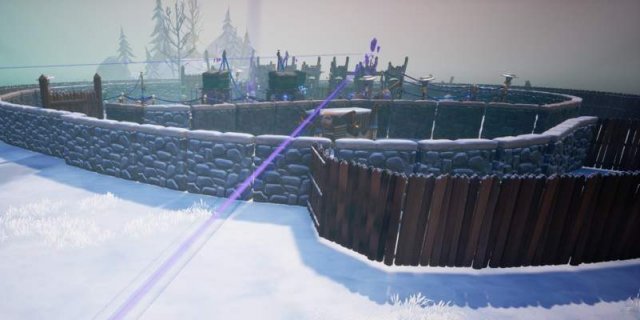 The First Defence can be done with Walls.

Wooden Walls are more than enough, i would recommend to invest in the taller ones so that the flying enemies can not fly over it.

After that build it in a Spiral. 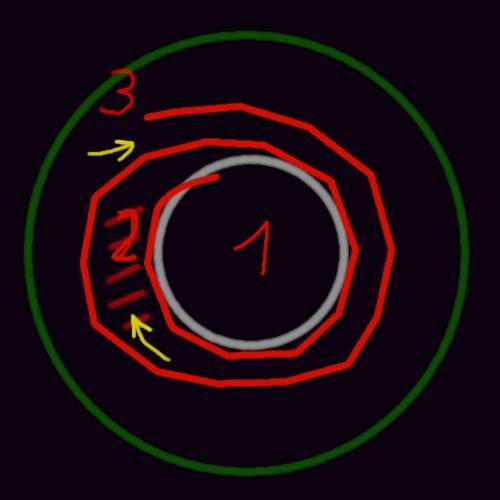 As you can see, this wall is built in a spiral where the Area in the center *marked with 1* is still big enough to build a lot of stuff into it.

The Area left of it is also a little bigger *marked with 2* as combat space and later for the Bunker to be built there.

And the Area left top *marked with 3* is the entrance where enemies will enter that spiral. (They always do because they want to destroy your regular buildings while ignoring walls (as long as they still have a way to at least 1 regular Building).

Yellow – Marks the way they take to reach the Center

This way you are able to fend them of by simply waiting at Position 2, ready to attack every enemy that tries to pass by.

All you need for that is a lot of wood.

If you be carefull while fighting, the enemies will almost never be able to attack you and the Walls or your buildings in the Center.

For higher Base-Levels i will recommend to upgrade it a little,.. so lets continue to Step 2.

Time to add the first Automatic Defence System into the Spiral.

I recommend the Bunker because of its fast firing ability compared to the Balista.

Place the Bunker on the light Blue marked Spot,.. in the Area (in Step 1 marked as Area 2), the Place where you fight the incomming Waves. 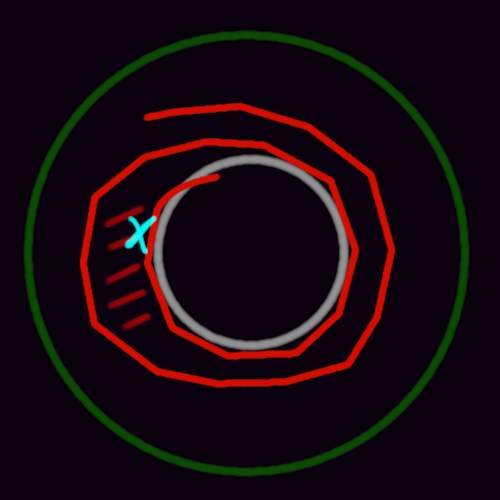 Place it lined up with the inner Walls, this has a Reason. Cause if you now add a Gate to block the Base in the Center, the Bunker will become the Target of every incomming Wave.

The second reason is, if you would place it lined with the Wall closer to the Runway, the enemies would be able to hit it through the Wall.

This way they have to come to the fighting Area first befor they can even hit the Bunker.

Keep in Mind, the little Villagers need a little befor they react to incomming Waves (so you have to fight a while alone until one of them goes into the Bunker).

And also a little help to stop enemies from hitting your buildings (including Bunker and Walls) is actually a good idea.

And a little later you can upgrade that even more,.. so you then only need to watch out for those teleporting Enemies.

These kind of defence has a huge Range and is best used behind Walls.

You will need a lot of energy to use them so keep in mind that you have to build Energy Production first. If you dont have so much energy atm, use less Tesla-Towers than i have.

The best way to place them, at least i would say it is, is like this: 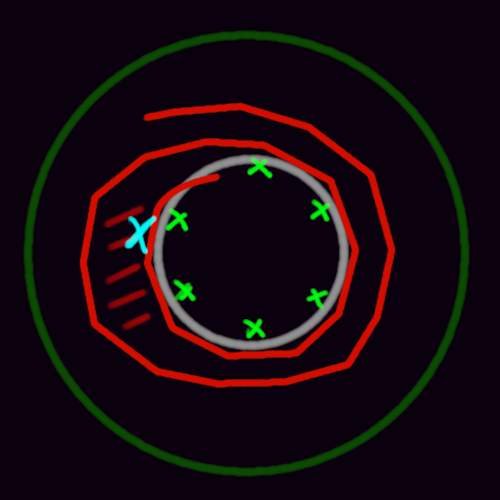 The Green spots are the places to put the Tesla-Towers. Best to pay attention here is to give a little space between the Walls and the Towers, so enemies are not able to reach them if they would want to try to hit through the Walls.

Sometimes i have even seen some enemies still try to and then just stood there in front of the Walls.

The best Part of those Towers is clearly their big range and stun effect. So most of the enemies die while they try to go through the Spiral.

And it can be made even weirder if you have the right Villager Buff.

In this case the Iron-Walls.

It decreases the damage a building would take when attacked.

At the highest level it even reduces the damage -100% (i am still not sure if this was intendet by the Devs cause this way the base becomes basically indestructable).

I used this Base-Build basically through the entire Game and never had to repair much.

With the Tesla-Towers and the Buff at the end i didnt even had to go back to base… the villagers took care of the Waves by themselves.