A guide explaining how to make Hunter viable in your random matchmaking. Hunter as it is right now is still severely under powered compared to Seer and Warden. Regardless, this guide aims to show you have to have fun and be useful with a very niche class.

No one can deny that Seer and Warden are S tier for a successful coop run in Tribes of Midgard. I aim to simply show you that a weaker class and “weaker” weapon type can be viable and enjoyable if you prefer a more nuanced, kiting type of combat.

I prefer Hunter over Ranger simply for the fact that Hunter has decoy early game to deal with groups of fast mobs or single target elites. Camps early and mid game are doable and nearly stress free with decoy compared to Ranger.

How to effectively use Hunter’s decoy when combined with the bow to clear enemies and camps with minimal damage taken.

Disclaimer: This is on a solo run so the enemies are a bit weaker. However, the principle of it remains the same and can be used for any types of camps or groups of enemies.

Also note that Decoy has a 40% chance of occuring. I got fairly lucky with the Linnorms but it’s a high enough chance that you should be able to rely on it as shown by the camp clear after. 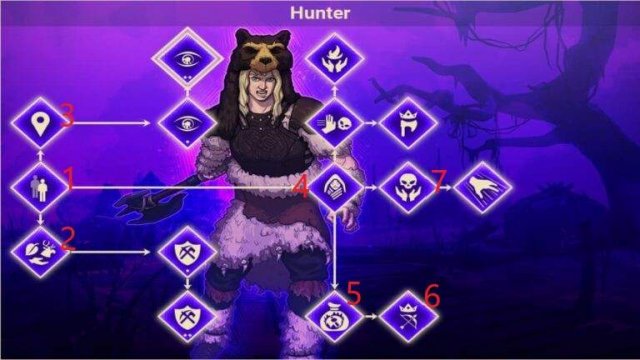 If you don’t find the land of pools early on, grab Foreshadow first so that you may quickly find shrines and other objectives.

I personally don’t bother with the fog of war but you are welcome to put one point into it early if you desire. I prefer to rush to bow damage to make sure my damage scales well with the day progression.

The last few points are up to you. If you have extra resources and your are leveling fast then you can go for axe damage. Carry an elemental axe as a side weapon if needed.

These are the desired runes you want. Of course other runes can work but I generally strive to get at least these 3 by the time Fenrir rolls around. If you run the archer starter kit you should start with Arm of Ullr already.

I start with the “Archer Starter Kit.” This will give you the Arm of Ullr rune to start off with and 100 arrows to help with camps and Linnorms. Do not waste the arrows on regular mobs.

Grab branches and flint and quickly make tools. Once done, set out on an unexplored road and look for the Land of Pools. Check your map frequently to see if your teammates find it first. Clear any small to medium camps along the way. You should unlock your decoy fairly quickly if your team upgrades the stations at home base. Focus on finding wolves, getting runes early on, and activating shrines.

Your team should have found the Land of Pools by now. You should also be level 3 if you cleared camps and gathered resources along the way. Make Villager Bow II and villager armor. Take the closest shrine to pools and grab as many mushroom as you can. It is important to grab these at night otherwise you will only receive mushroom oil and no moon bolts.

Communicate with your team and tell them not to grab any mushrooms if you can. You want to get value out of your skill and double your pickups on these. Your team will need these for lightning axes. The mushroom oil will be useful for health potions. Don’t forget to also cut down Yews for the midnight oil.

Alternatively, if the Land of Pools hasn’t been discovered, go to an Ash Beach. Grab as much seaweed as you can for the starlit seaweed. This will be useful later for your team to make the iceproof epic armor. Again, make sure to only grab these at night to receive starlit seaweed. 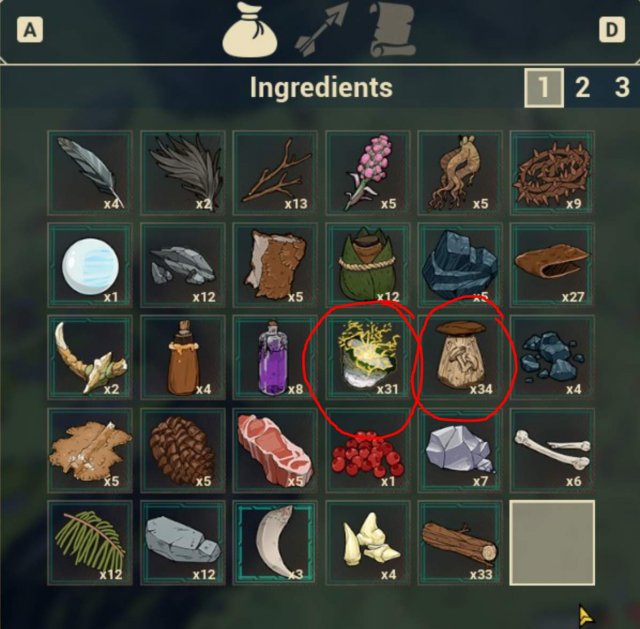 This is after Night 1. There are enough mushrooms for pretty much everyone on your team to get a lightning axe or bow. After Night 2 you’ll have more than enough.

Stay in the Land of Pools and look for Linnorms. Use your decoy to kite them and farm as many as you can. You should only need to kill 1 or 2 to make the Norn Bow. If you are lucky enough, you can get enough to grab Norn Bow II or hand off the rest to your team. Grab silver if you can for Raider armor.

Spend this last day gearing up as much as you can. If you were able to find the resources you need, go ahead and start looking for and clearing as many camps as you can. Stay out finding shrines, ruins, and important locations. Work on the Quarry/Lumberyard whenever you can.

Rinse and repeat exploring, farming resources, souls, etc. Use whatever souls you have for station upgrades, buildings, bridge (if it’s been found.) Try to be self sufficient on your special arrows by clearing camps. Only use them for tricky situations or Jotunns. Use your Norn bow only to defend the base or take on bigger camps to conserve durability. Sell extra unneeded resources that you grab from animals/trees/plants for souls to be used elsewhere. Also sell extra arrows. You only need around 50 to help with elites.

Do not use your tripwires or jars unless needed.

When your team has cleared the hideout and is getting ready for Fenrir, see if you can get one last upgrade for the Legendary Bow, Feral Armor, or Norn Bow III. This is how your inventory should look by the time you fight Fenrir:

You will do much more damage than you would ever expect with a bow. I often find myself being the most consistent and highest dps during blood moons, jotunns, and bosses late game.

* – optional only if you are skilled at playing armorless.

Set up all your Jars and Tripwires before Fenrir comes out. Once he spawns, use all of them to get quick burst damage. Use your repair potion once your bow gets low on durability. Alternatively, recall home and repair if your waystone is off CD. You should take very little damage if any at all. Spam your mana potions to get your skills up for burst damage. If you have the Norn bow, use your piercing shot and save your healing aoe for when teammates need it.

Congrats you beat Fenrir and weren’t a completely useless hunter.

This is about half way through the Fenrir fight with the legendary bow after I recalled once for a repair. I grab whatever left over special arrows I can and head over. I found plenty of runes in the form of Far Fetched and a Seidr Weaver as well as the Arm of Ullr I started with. Although it may seem like I was lucky, I had to pass on several copies of Arm of Ullr and Far Fetched leading up to the fight. It’s quite easy to get fully stacked ideal runes by this point.

Some of the damage is off screen but with the explosive arrows I’m hitting anywhere from 1200-2000 per hit depending on the element type. With no arrows I’m still hitting for about 400 per hit with an additional 200 from Seidr Weaver every so often compared to my allies’ 190-200 per hit. My right click (which I forget to use… I know, I know) hits for about 1000. Keep in mind I pretty much never stop hitting Fenrir the entire time while my allies are kiting away from his attacks. You are a very strong safe anchor of dps during this fight.

I’m still using Raider armor at this point and hadn’t upgraded since day 3.

At 2:36 you can see how much damage me and one other bow user are doing alone for a short bit to give you an idea about the DPS

Im hoping with buffs like these the hunter can be a resource gatherer early game, and become a stealth dps monster late game that focuses on playing around decoy.

This guide shows all available SHiFT Codes and how to redeem them. ContentsIntroHow to Get Shift CodesShift Codes ListExpired SHiFT CodesHow to Activate Shift Codes Intro In this guide I’ll […]

Tribes of Midgard – How to Build Ramps (Quick and Successfully)

Ramp building with visual/text/video examples. Building Ramps Guide Examples Here are the basics of what you need to know. Avoid building around mines, trees, plants (enemy’s <– you know these […]