How to turn potential enemies into potential allies, and some very basic gameplay hints about group fights with allies / neutrals.

So I’m reasonably new to Divinity: Original Sin 2, and I never played the first one. I did however play The original 3 Divinities as a young kid, and the Dragon Knight Saga. All incredible games, and I’m glad I picked up this one. I have noticed on my adventures how one’s attitude affects how NPCs react to you in the game. Obviously a higher attitude means they like you more, and are willing to give shop discounts and aid you.

But I have also seen numerous threads and discussions about people asking how to save certain NPCs in fights, and how to make those large fights easier. Aside from “getting gud scrub” you could always try your hand at a bit of unorthodox diplomacy 😉

This guide is nothing complex or ground breaking, it is merely a very simple explanation on how you can turn enemies into allies, and possibly receive bonuses and buffs on your travels that you otherwise would have missed.

How to Check Attitude

So you’re a bit unsure if someone actually likes you. A few easy ways to tell really.

Obviously we just met Trader Bree so she isn’t our beer-skolling chum just yet. But soon, SOON, we will bestow upon her many gifts and trinkets, that she might give us might discounts in return. Because skillbooks are expensive girl!

Her attitude is circled. In red. With arrows. 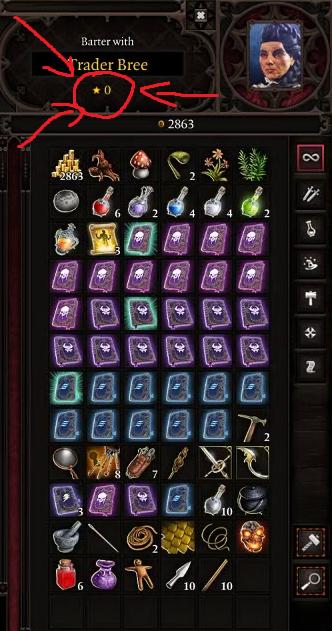 How to Raise Attitude

Quite simply, attitude can be raised by giving gifts. Everyone and anyone can be traded with, so go into the trade menu with them, give them a whole load of your otherwise worthless trash, and Accept the trade asking for nothing in return! GIFTS!!!

It really is that simple. It should be noted that the better the item the higher their attitude will raise, but I raised a few NPC’s up to a solid attitude giving them nothing but shells, skulls, chipped wood and a rat’s tail. If you’d rather keep these for crafting then find other superfluos crap filling your inventory.

Sometimes they will become your ally through quests or your actions in the game world.

As you can see in the minimap, the dots are mainly green, because I so generously used my sexual healing powers on these injured Seekers, raising their attitude enough so that they loved me. 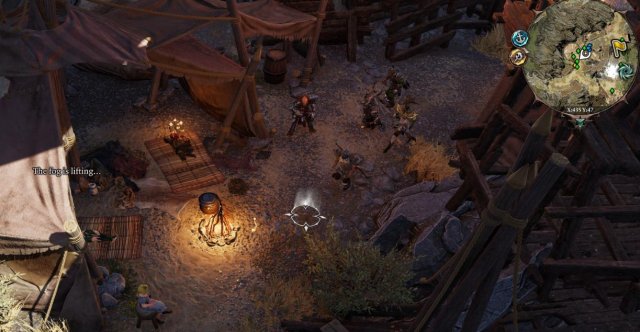 An NPC must usually be at around 35-50 positive attitude before they become your ally, the green dot on the minimap (they will change from yellow). HOWEVER, as told by some loading screens, NPC’s also have their own alliances with other NPC’s, usually like guards or members of a gang/faction. This will mean you will have to raise their attitude towards you so that is HIGHER than their attitude towards their friends. Otherwise they will still leap to the aid of their comerades as you so aggressively try to murder them for their tasty loot and experience points.

An Example of Making an Enemy into an Ally

Great now that’s out of the way we can continue. If you, like me, came across that little ♥♥♥♥♥ Griff and his stupid little ♥♥♥♥♥ gang and decided the best way to finish this quest is to kill them all (plus loot and exp) then probably you, like me, finished the fight and thought “well that was actually way harder than I anticipated. Unless you’re like a veteran and after you read that you laughed and thought “lol nubs I did that fight in Honour mode with Lone Wolf and didn’t even lose any of my armour learn to play the game” yeah well ok champ well done we all know how good you are enjoy the rest of your killing frenzy. But for some it was definitely a challenge. Seen a few threads giving advice on how to beat this fight. How can a few shirtless gimps wipe your entire party? Or at least make you use too many of those precioussssss resurrection scrolls. You could be a tad weaker, usually I get to level 3 before fighting them. They also have some decent weapons and abilities, and they start in good positions with the high ground (hello there). Also it’s a 4v5…. but wait, it could be a 5v4 in your favour. “But LowFat, that’s impossible, you can only have a party of 4 and nobody likes me” Ok mate spare me your real world problems and let’s focus on the game. I have one word for you.

I mean the NPC; Butter. She’s located on the balcony of Griff’s Kitchen and she’s actually a very nice and likeable gal, taken from her family and forced to join a gang to survive, tragic. Talk to her and if you play your cards right, she agrees to meet you if you escape Fort Joy. She writes it in her diary it’s fantastic. Anyway, just because she’s agreed to meet up doesn’t mean she’s willing to fight for you. Yet. Que GIFTS!!!! Collect trash, add to wares, offer all wares, accept for nothing, profit. You need to raise her attitude to at least 50, maybe 55 before she will fight on your side instead of Griff’s. Her high ground (hello there) on the balcony gives her a good angle so she can use her bow to help you, and if you give her any food or potions she will use them too. Clever girl. Obviously bear in mind she is like any other NPC and can be killed, so at least try to keep her alive.

Babe I love you too 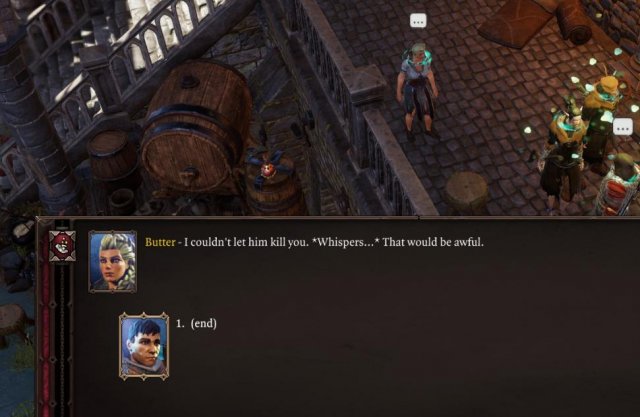 A quick note: if you outright murder Griff’s Gimps (what I call them) outside the quest, by that I mean you attack them unprovoked, assault them, strike first whatever you want to call it, remember that they’re still Butters’ friends too. Sometimes even when she actively fights them she will run up to you and enquire about the murder straight afterwards. Unsure if this is a bug or if she’s just really stupid (still love you babe). So it may be best to just initiate the fight through the quest and avoid her sticking her stunning nose where it fkn shouldn’t be. Also on co-op it really varies, sometimes she fights with you sometimes she doesn’t. Again I’m unsure if this is a bug or if she is just confused by the two or more player controlled characters. Definitely works on single player thought 🙂

Making someone like you by forcing them to accept shells and empty bottles is just one way you can gain potential allies in large fights. If you find merchants you want discounts for, GIFTS! Someone you want to spare? GIFTS! Just feel like offloading your trash and have so much money you don’t even need their 23 gold? GIFTS! It opens up some interesting dialogues and potential quests too.

Hopefully this has helped you to find your inner Scrooge and give out free stuff to people in the hopes they appreciate your gift of an apple and a short stick enough to begin exploring your otherwise below-average personality. Happy gift-giving!

Divinity: Original Sin 2 – How to Get Insanely Rich (During the Tutorial)

If you do not like exploits then you might not want to read this guide. Other then that its probably not a glitch so. It is very quick to do, […]

This spoilerfree guide features tipps and tricks from a very basic to an advanced level. The guide is seperated in several chapters to avoid spoilers and to enable you to […]

Ever wanted to play divinity with multiple custom characters? Well now you can! Disclaimer: It’s quite likely that someone has done a guide of this before, but I wanted to […]