Verdict is a multiplayer online roleplay medium where you can write your own story in collaboration with others. Participate in a dynamic and changing world with an overarching plot every player can have an influence in, should they desire. Leave your mark, your legacy, upon its timeless history, built by characters that players like you play and write into the interactive world.

Now I’m glad that D&D and the likes of other roleplaying-focused games are making their ways around the viral internet and into mainstream entertainment, but sadly, the term roleplaying is often associated with some kinky fetish rather than what it actually is: you create a fictional character and play them in various mediums. In Verdict, it’s a game with mechanics that encourage you to write about your character’s interactions with the characters and environment in the expansive, hand-made universe that they find themselves in.

There’s all sorts of ways people play these characters, ranging from immersing themselves into nearly becoming an alternate persona not too unlike method-acting– to just treating them like you’re writing a novel centered around the character you are roleplaying. Generally, the writing in Verdict is done in 3rd person limited-omniscient.

If you’ve ever played any form of tabletop roleplaying game system like D&D, you’ll know how much of a potentially arduous experience it is to create a character in a roleplaying-focused game. Here is some basic information about the races. There’s also a lore/background cheat-sheet here. The in-game race selection menu also has a brief but apt description as well! 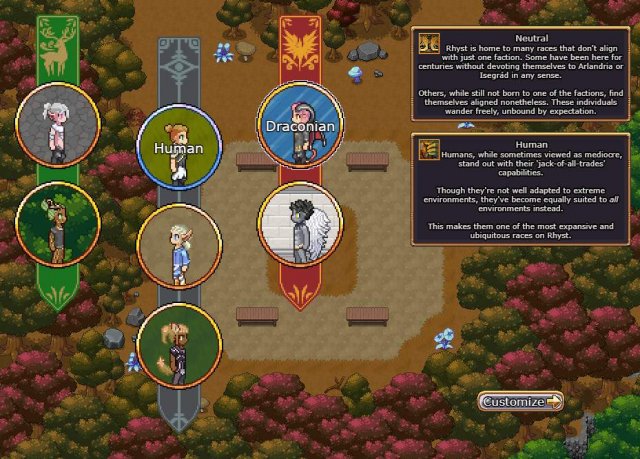 Players are encouraged to create some form of a background for their character, ranging from an amnesiac human who knows nothing about the world (my favorite go-to for when I’m too lazy to read up on the lore) to an established member of a major faction’s nobility (stuff like this requires the most story knowledge, research, or even a custom application for the role). 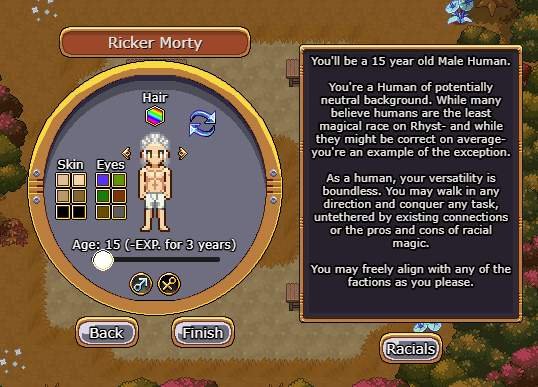 You may have also noticed the age slider with various EXP modifiers depending on your age. As a general rule, for each year you make under the age of 18, you have a year of -15% EXP penalty. Conversely, at the age of 30, you receive +15% EXP for a year, and an additional year extension of that buff for every 4 years your character is above the age of 30.

I’ve Created My Character, Now What? 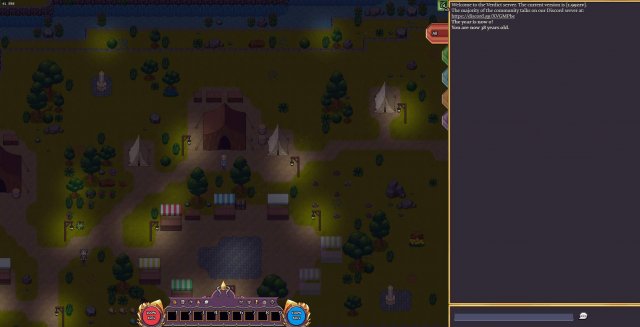 On the right is your chatbox with its channel tab selectors. On the bottom of it your input field for the channel selected, and a button for RPing (posting longer posts, sometimes called red-texting) on the right of the field.

At the bottom center of your screen is your hotbar where you can slot your abilities for use and your HP and MP displays to the left and right of it. Near the top of the hotbar interface is a line of buttons that lets you access various other interfaces like (from left to right): stats & inventory, spell list, crafting skills list, crafting menu, roleplay button, start engagement button (needs opponent selected with LMB), guild interface, opening a help ticket, customizing your character’s appearance, and finally, settings. I’ll get into more about some nifty customizations you can do with the settings near the end of the guide, for now, let’s dive right into the meat of it.

Let’s briefly go over what kind of background Ricker Morty’s going to have before I go around and potentially bump into other players in the case they decide to interact with me! It’s time to create a description.

Now there’s many philosophies around how specific and fleshed out your character’s description would be. For me personally, the minimum line is the physical characteristics of your character, as that is the primary thing that other characters would notice when interacting with your character. I usually draw upon the five senses: see, hear, smell, and well… usually not taste, but, maybe it’ll be relevant if people knew your character tasted like chicken. In case you run into a mimic or something. 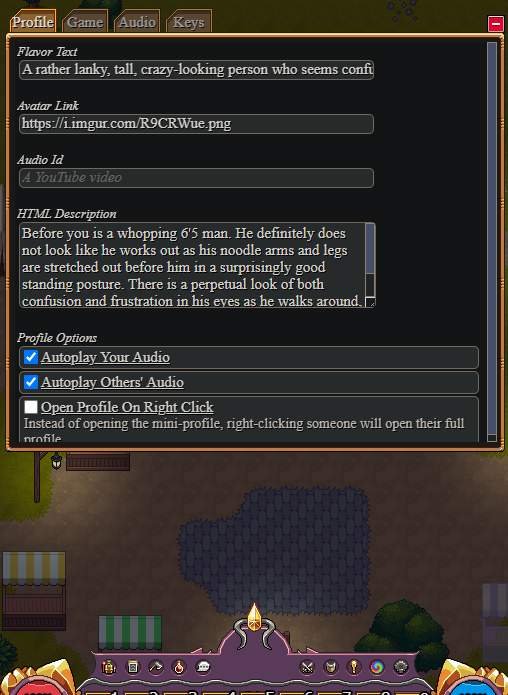 Profile tab under settings, accessible by through the settings tab as the rightmost of your row of buttons

Let’s open up the profile tab and fill it out really quick. The HTML (includes CSS functionality) description actually has quite a ridiculous amount of customization that’s available and there will probably be numerous written guides and templates you can try and learn off of to make your profile nice and snazzy, but for the sake of this tutorial, I’m going to write a rather bland looking profile.

Now, after filling it out, it should look like this when someone right clicks you and clicks your profile! 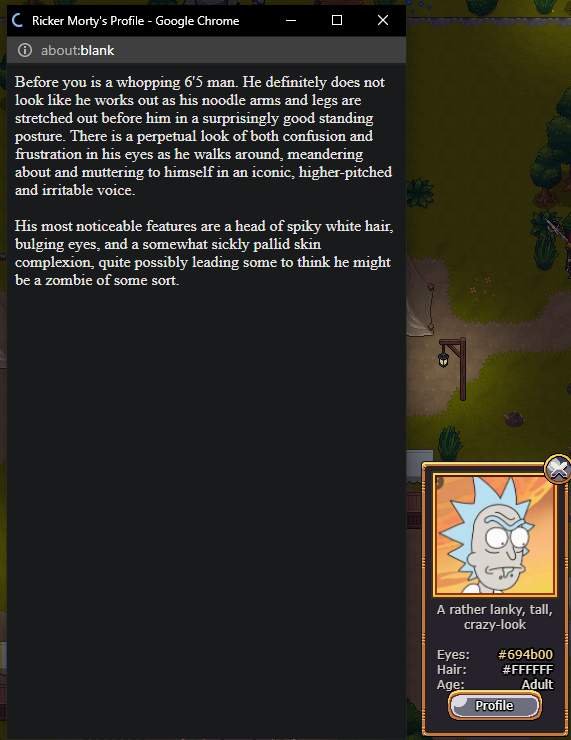 Alright, now we’re set up and we can have Ricker do whatever he wants to do in this open world roleplaying sandbox! I noticed there was a person nearby the spawn. Verifying that it’s a player and not an NPC, I’m going to approach them for RP. Let’s see how it goes. 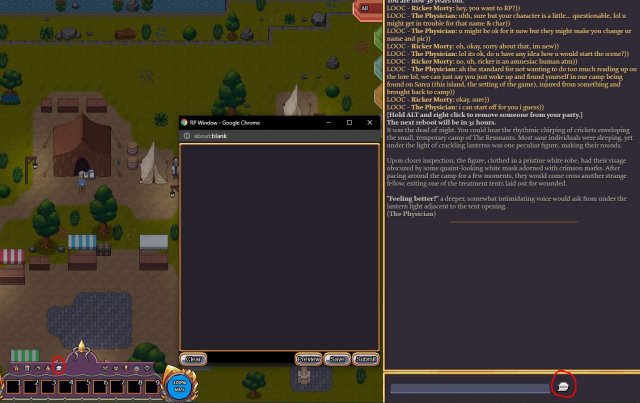 As expected, using a character resembling someone from a popular show seems to not be the best idea! Again, try not to do this and make your own original character. There are some cases where you can draw inspiration from them but anything too blatant will likely be pointed out. Regardless, this person walked me through how they want to open the scene and I provided some details about my character and how the circumstances would play out for them to meet!

The Physician’s opening post illustrates how important an opening post can be. Opening posts are usually longer and articulate immediate relevant details and setting on the scene. They can oftentimes include far more details than this, not limited to but including time, weather, business (people nearby, NPCs or PCs), sounds, other happenings or interactions, location, etc.

Now, after reading their post, I can reply. To reply in a long post, hit one of  the circled red buttons to open up the posting screen. Otherwise, it’s not taboo to just use the chat input for a quick dialogue as well. The Physician, probably aptly gauging that I was a new player, presumed I didn’t open their profile to check their appearance (I didn’t, oops) so they courteously provided me with a quick description of their appearance so I can immediately get going. 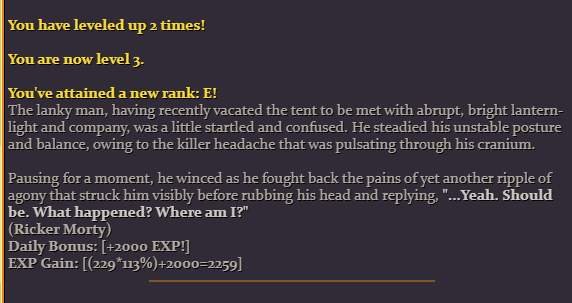 Imagery is an important skill in writing and this leaves quite a void for them to fill in with their imagination, but suffice to say, it should be enough. Now, in blatant salience to the gray text of my post is a level-up that I achieved posting for the first time! Hooray!

EXP and progression in this game is awarded almost purely from your character’s interactions. Whether this be through posts or through chat dialogue, EXP is earned in this fashion, and usually scaling to the amount of text that you post. This is one of the core fundamental concepts that make Verdict different from almost all RPGs; the power distribution and progression system is governed solely by the amount of writing you do instead of grinding various mobs.

As a disclaimer, cheating these systems are very blatantly caught and severe punishments are usually doled out for offenses of this manner. The punishment policy can be found here. 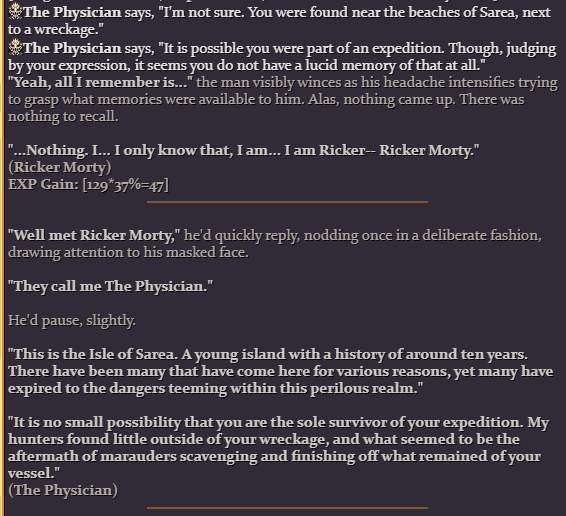 Some more exchanges between Ricker and The Physician

Following a few more exchanges, The Physician was nice enough to drop to me a bit more lore to bit on. He aptly decided that he didn’t need to detail anything so he proceeded with a bit of fast dialogue to try and elucidate what happened to Ricker. He paused, probably deliberately, when he saw the “I’m posting” icon appear above my sprite in-game to let me post. I elected to do a longer post because Ricker definitely has to do the characteristic surge of headaches when an amnesiac character tries to remember something before replying.

Introductions in this game are important! My character does not know who this figure is. They don’t know his name, or what he is even called. Now that I have introduced Ricker and that he has introduced The Physician, our characters know each others names! Newbies oftentimes forget that their knowledge is separate from their character’s knowledge (we get into IC, and OOC separations with this concept), and that your character does not know other peoples’ names until they learn of them not through some interface that you, the player, is gazing through but through interactions in the game’s universe.

Guide to Limbo Basics Limbo is the name given by humanity to the so-called “death realm”, or, in other words, where humans believe they go when they die. It’s incredibly […]