Have you ever wanted to play New World as if it was Dishonored/Hitman or any other stealth game? Well now you can, with a revolutionary technique of playing in massively over leveled areas which makes it easy to be killed in one hit. Forcing you to get past the enemies without confrontation.

Guide to Get as Far Into Myrkgard as Possible

There are a few things to prepare:

Good Path to Get to Myrkgard

This part is quite easy, but before you start you will want camps. Water is also good to have but, most enemies will one shot you, so it isn’t important. Another good to have, is a hatchet with berserk and speed boost passive. An ice gauntlet will also be nice to have, as it works well for distracting enemies for a hit or two.

If you can, stay on any type of rock, as the AI will both not spawn there and have a harder time following you.

You should also keep your inn recall at some part early in the map, as the way back will be horrible. 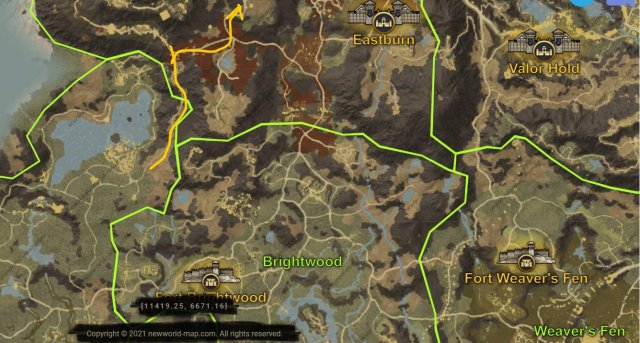 This path is probably the easiest to get up to the great cleave, and up to there the only real danger is ghosts, so most paths work well. 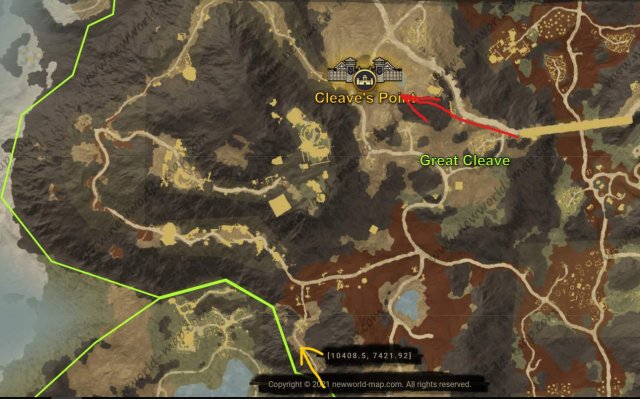 After which you will want to go to Cleave’s point. 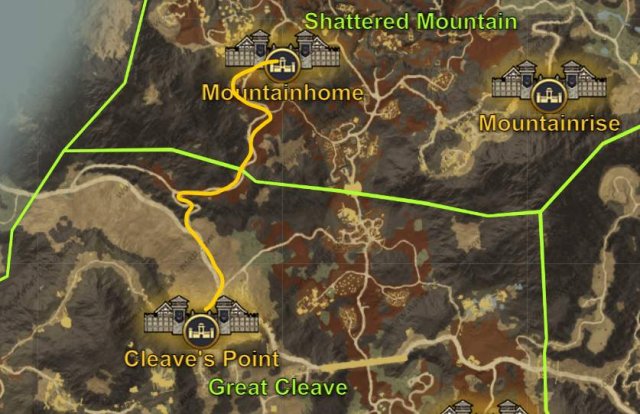 The path to Mountain home is especially easy, with only a couple of ranged and the rest being melee.

Just jump of the cliff, and follow the side of it until the green circle, where you will most likely want a campfire, as the bridge will not be the easiest part of this. The ice gauntlet will be worth it here, as it can take at least one hit from the archer right before the bridge, and when you’ve gotten past it, just stay on the cliff face, going prone if necessary. 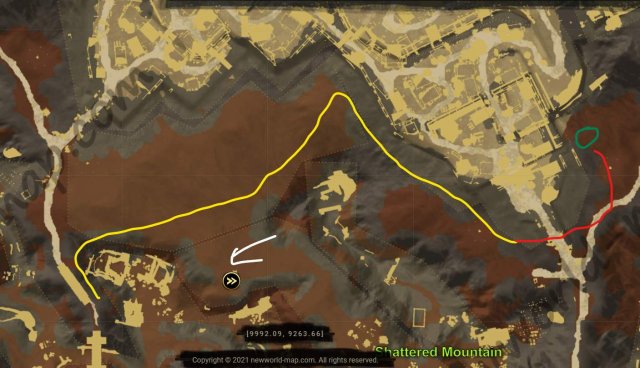 This part is almost entirely safe, except for the red part. There is also a spirit shrine if you happen to have enough azoth and want to get back. Ones you have the campfire around the green circle, you’ve gotten the entire way.

Now, this is the difficult part of the journey, and also the part I myself never completed.

The main path to get there is: 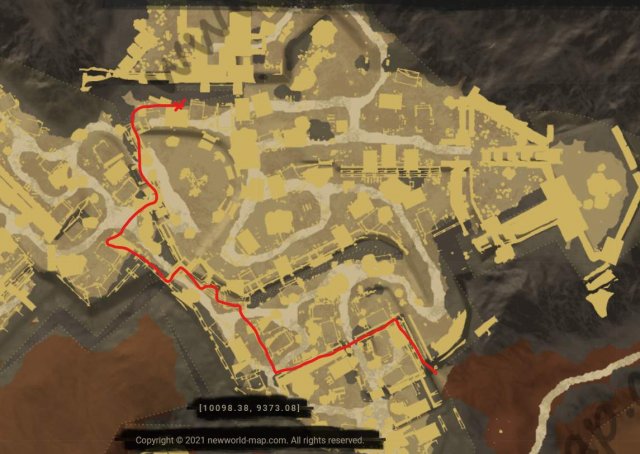 Here is where you’ll want water, as you have to run through a level 3? corrupted area. Just walk upp the stone to the corner of the stone wall and log spike wall, and just jump over it. It is a very easy jump. 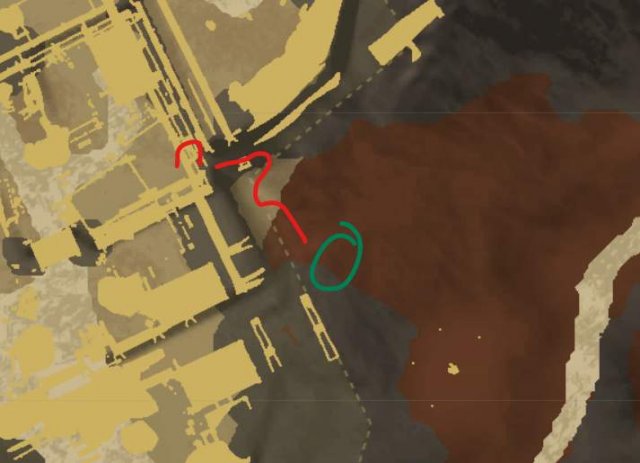 Once over the wall, you’ll want to follow the stone wall to your right until another log wall which you will jump over with help of the roof to your left. Once over you will have a watchtower also to the left. 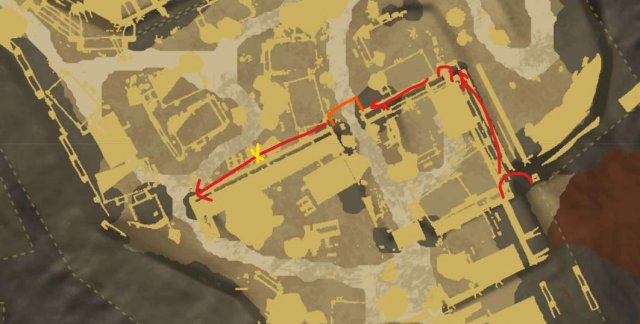 This watchtower is the first obstacle, which you will have to crawl past on the tiny ledge that surrounds it. There is also a mage on the ground to the right, which will, unless fast enough kill you. So once, around the watchtower just run and roll until the house where you will be safe (maybe only if laying down?).

The next part past the house is very easy, just run to behind the barrels, wait until the second mage forgets about you then crawl to the singular barrel.

Here will be the first difficult jump. You need to walk to the edge of the barrel and jump diagonally past the watch tower and spam space to climb up on the walkway around the corner. If you fall, you can hide behind the door and use unstuck. 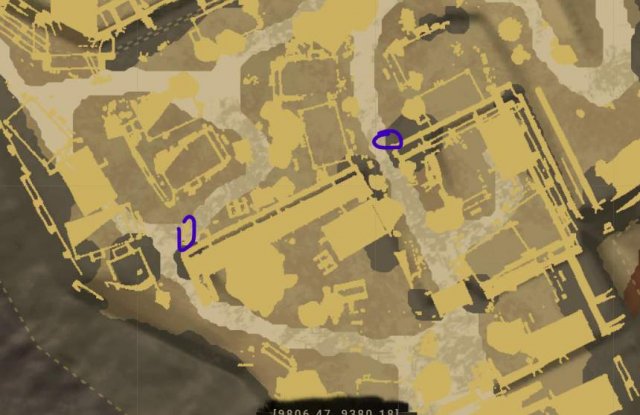 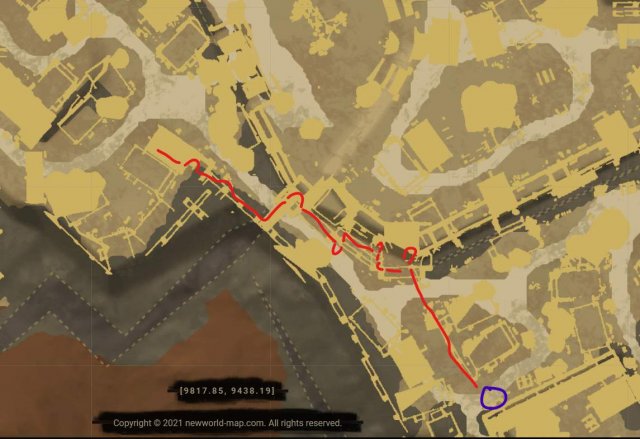 After jumping around the watchtower, just crawl on the walkway and climb up when needed, ranged may see you but can’t hit you if you are prone.

At the end of the walkway you will need to climb up onto a stone wall ledge. These will be the most difficult jumps as far as I know. Follow the ledge to the left and jump around the corner, hopefully no ranged will have seen you, (Although they cant hit you when you are prone, it makes it difficult to jump) keep following the ledge until you can go up to another higher level. A mage may notice you, but unless they use a mine on you, they will quickly forget and go back. (Also lay down as quickly as possible after the jump.) Once up on the higher level follow it to the left and go down to the other ledge a tiny bit down.

Follow this, and do another jump around the corner. Follow this part of the ledge until the end of it, that is next to the bridge (the support pillar directly next to it is not possible to walk on.) When on the edge, jump and spam space to get onto the bridge. once over to the larger castle wall walkway, you are safe. (Sadly as far as I have tried you can not place a campfire in anyway there, even though it is outside of landmarks.)

At the end of the walkway there is a watchtower with a house behind it, just jump where the roof is the lowest and you can easily get over (otherwise unstuck works well to get back up). 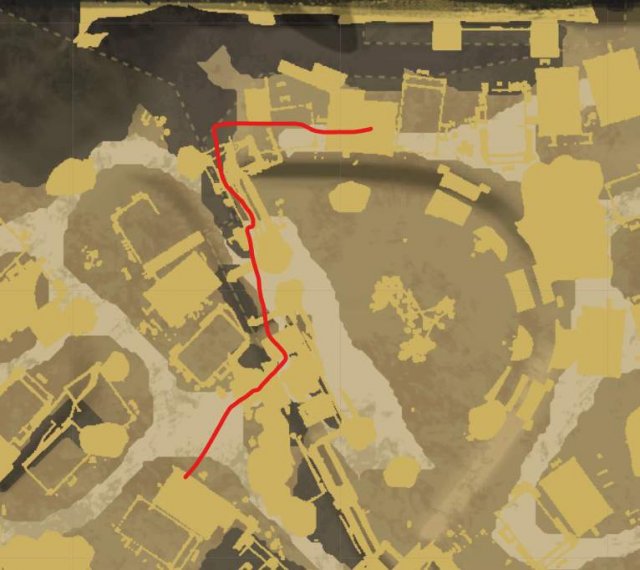 This here is the last part I have gotten through, I managed it one time. You need the get past t guard up the stairs, and to the left of the stairs is a ledge where you can both loose the enemies that are following you and jump over the wall to get behind the houses. Can’t remember how, but from there you can easily get onto the roofs, but, I do not know anything past this.

To get past the guard and not get shot by ranged, the ice gauntlets ice pylon and other functions are helpful. As well as berserker with the hatchet.

Good luck and have fun, you will have a very difficult time doing this. Took me about 60 attempts to get as far as I did.

Probably the best picture I got from trying this. 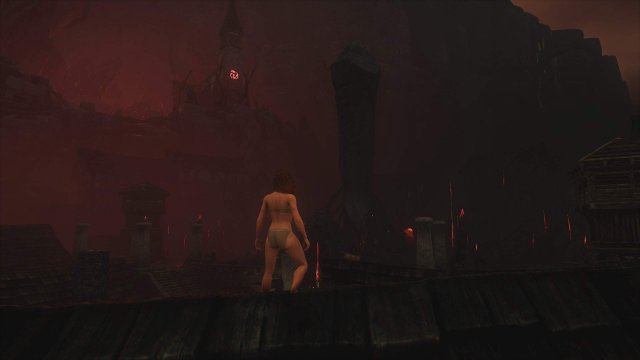 New World – How and Where to Find Resources

This is a guide what I know so far. About where to find iron fibre and such. More New World Guides: 100% Achievement Guide (with Tips). Fast Leveling Guide. How […]