Here is the official guide for Outergalactic Aliens from the creator of the title, Pinblend Studios. This table is pretty complex, so let us give you a little helping hand!

Scoring Guide For All Missions

Here is a complete breakdown of all the main missions and a couple side ones:

The multiplier bonus can increase to x10, and resets once the current ball is lost (unless it is replenished by an extra ball, in which case you keep the multiplier). After the bonus hits x10 you will be awarded a set amount of points if a mission tries to award an increase.

This table features a much higher output for scoring compared to our previous Neon Nights title. The mission points awarded were based on the difficulty of completing each mission. 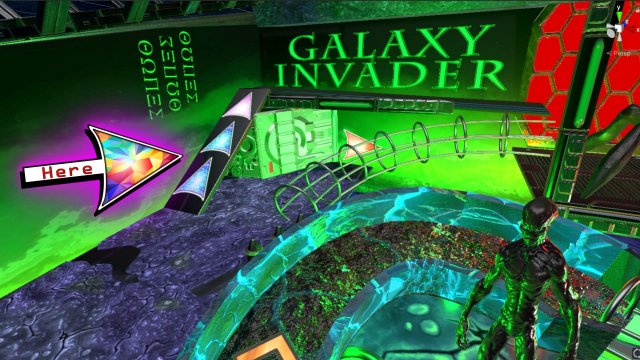 This might be what a few of you came here to find out. This is a secret mission. It is worth the most points on the board at 7.5 million. There are two parts to this mission, the first part, is, well, a secret.

The second part however i can share a little about, if you look at the photo above, the arrow is pointing at the metal ramp in the back left corner of the table– there are 3 arrows on that ramp. The first arrow at the top has to do with a completely separate mission. It has nothing to do with Galaxy Invader. The second two arrows, the blue ones, those are the LEDs that indicate you have cleared part one of this mission and they will start blinking if you have cleared the secret requirements to activate the second half of the mission. If the blue arrows are blinking then you need to focus on knocking the ball up this ramp not once, but twice. If you manage to do that, then congrats, you have just cleared Galaxy Invader, you will get a special audio cue and a massive score bonus.

There are no LEDs, or any indication of any type, that you are clearing the requirements for part one. With that said, it should naturally occur, especially if you get a multiball going for a bit, it will naturally happen. During our testing we did activate this mission a few times without trying. Be patient, it will happen.

This is in our opinion the second hardest shot on the table to activate this mission, hence why it is worth the second most points. To begin this mission you first must open the teleporter silver door in the top left corner of the table. This is done by rolling the ball over one of the two switches, one switch is located in the photo below, which is next to the spider alien when the ball enters the metal coil ramp: 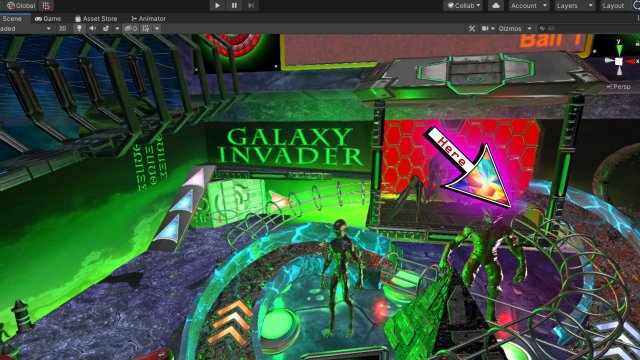 The other switch, which is invisible, is located on the right ball drain in front of the kickback. If the ball is draining out the right side, regardless of if kickback is on or not, it will open the silver door.

Once the silver teleport door is open you must use the upper left playfield flippers to shoot the ball into the silver teleporter, if you are successful the ball will teleport out of this corner and pop out the top right void portal. Part one of the mission is complete, and now you have one minute to complete part two, which is to make the alien spinner in the center of the table spin a total of 8 times, the harder you hit the spinner the faster it will spin and also the less times you will need to hit it. 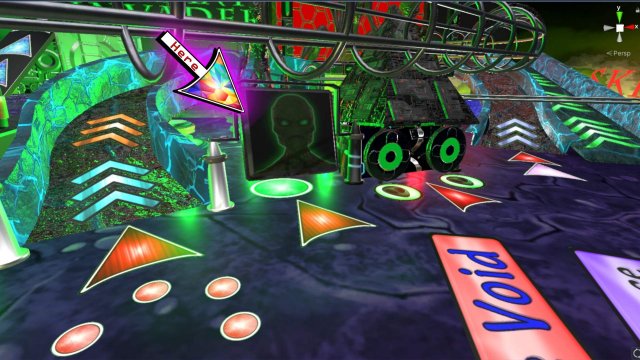 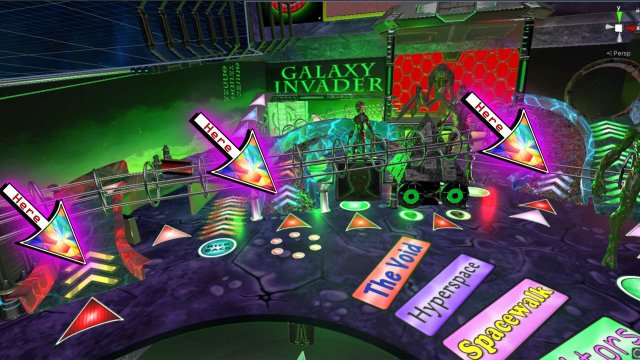 This is the mission that is activated during multiball, and has a timer of 31 seconds to complete. To successfully complete this mission you must hit all three ramps that are shown in the photo one time each. If you manage to do this before time runs out then congrats you just completed the mission. Notice the “here” arrows in the photo are pointing to the arrow LEDs that will light up during this mission, if the arrow is lit up you need to hit that ramp!

In order to activate multiball you must complete the mission that takes place under the table on the alien face — see mission “Visitors” and “Abduction” for more info.

In order to start Hyperspace you must first shoot the ball into the top right blue portal, which is also used for “The Void” mission. Once the ball enters the portal it will travel down the left side of the table and drop next to the bottom left flipper, shown below 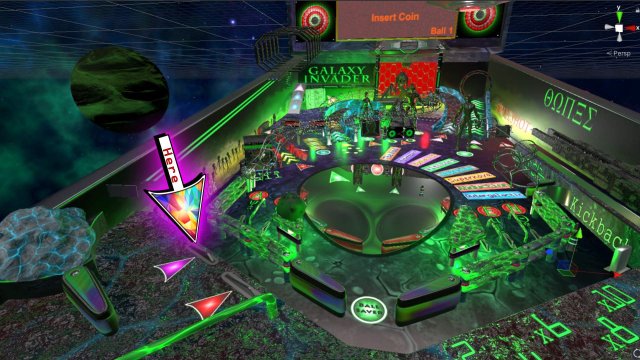 You are able to “catch” the ball with this flipper after it has dropped, allowing you to set the next shot up which will activate the mission. There are two shots located here, and the one to start Hyperspace is indicated with the purple led arrow shown in the photo. The other, red arrow, is used for “The Void” mission. These two shots have very different “rings” when hit, one sounds like a sonar ping. The camera is a little tight in camera view one, so feel free to switch to camera 3 to help with the shot if needed. 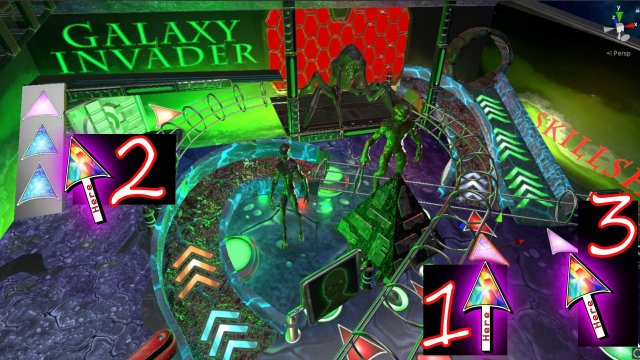 The skill shot mission is pretty simple, when you first launch a new ball (not counting the extra ball if that has been awarded), you have 25 seconds to hit the ball up the right ramp into the blue portal. This is indicated by the flashing green arrow, and if you do not make this shot before the timer expires you will hear the alien taunt “where are you”.

To begin the Outergalactic Mission you must hit the bumpers located in the photo below a total of ten times. 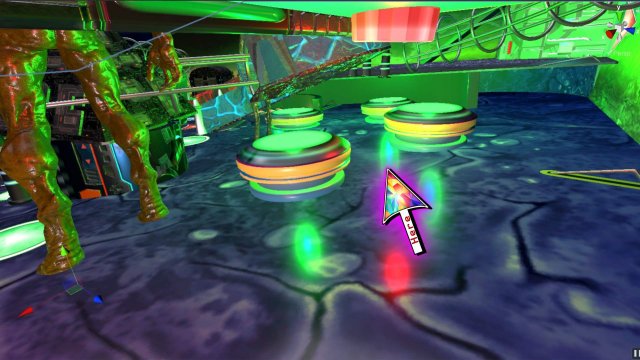 Once you have completed this part of the mission the first of the three aliens will pop up onto the table. You have one minute to knock down all three aliens before time expires, if you manage to do this you just cleared the Outergalactic mission!

This is an interesting mission because it isn’t necessarily that hard to complete but it might be one of the final missions you finish because it does require quite a few shots. To start with, you must shoot the ball up the top right ramp into the blue portal a total of four times (number one). 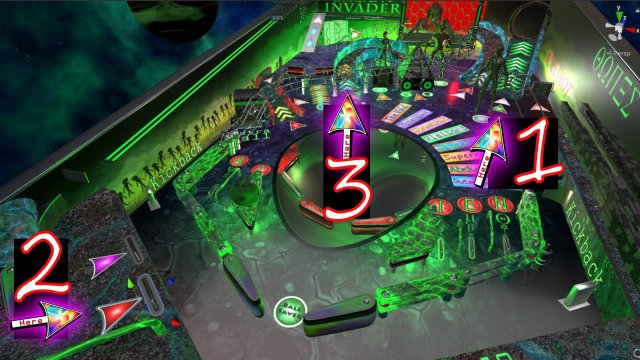 Once you have completed part one you must complete the final two shots (number 2 and 3 in the photo) to finish the mission. Both shots will be indicated with a lit LED to notify you where to shoot.

This mission is simplest on the table, just hit the same ramp a total of six times and you will complete this mission. Every time you hit the ramp you will notice one of the tiny led circles will light up, indicating how many times you have gone up the ramp. 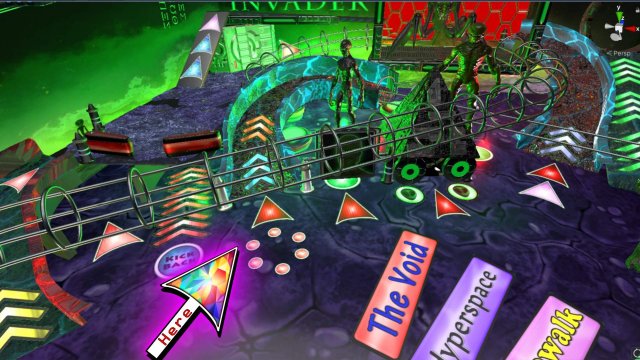 The 5 lanes above the main flippers each contain an ALIEN letter, and you need to drop the ball down the lane that is currently lit up, starting with the letter A. Once all letters have been obtained it will open up the “Extra Ball” alien treasure box, and the “Extra Ball” led will begin flashing. This part of the mission originally had a timer of one minute, but we took into consideration how tough of a shot this is and decided to remove the timer, so this will remain open until you either make the shot or lose the current ball. 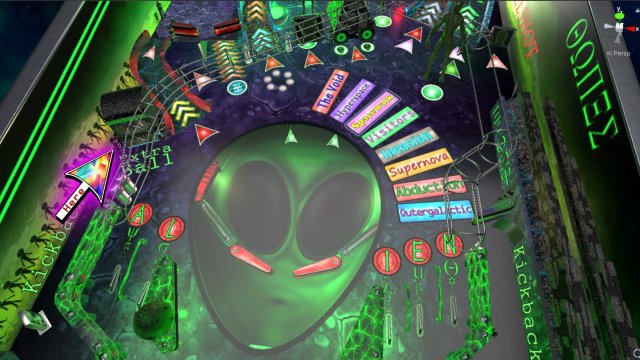 There are three different ways to get the ball in the treasure box. The easiest is to use the left kickback (if it is available), the kickback will generally launch the ball into the box. The second way is to try to shoot the ball in there yourself, which at the angle its sitting is not the easiest shot to hit. The third option is to hit the box using the void portal flipper. Finally, you may just get a lucky bounce in there as well– it happens. 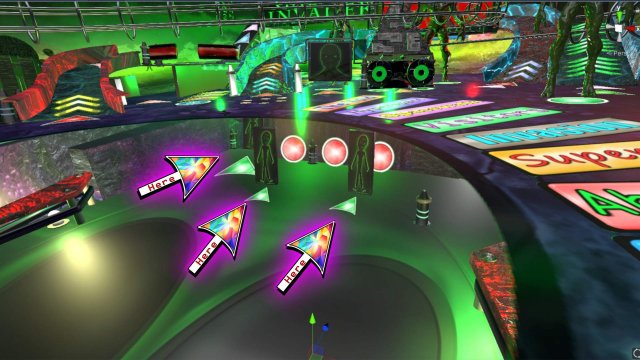 Note: It is rare, but possible, to clear this mission and NOT hit the ball hard enough to go down the chute. If this happens, and the mission clears, the gate will go back up and the only option is to let the ball drain out the bottom (you do not LOSE the ball, you just won’t activate the multiball mission).

This is the mission that gets you onto the bottom playfield (the giant alien face). To start this mission the right spinner that is hit when you eject the ball must be spun a total of 12 times, once you have completed this it begins part two. 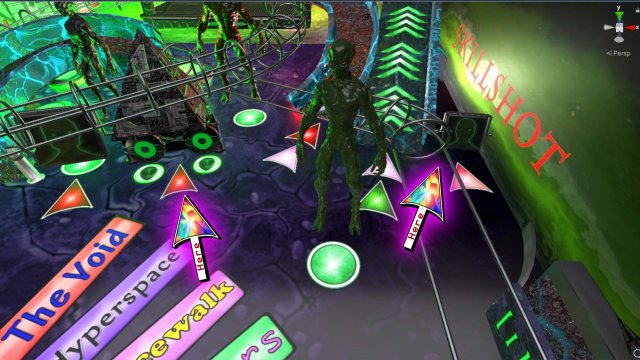 The temple has two drop targets (the green circles), and you will see a flashing alien face to indicate which target to hit. Once both targets are down it will open the temple, indicated by the red arrow. Shoot the ball into the temple to complete this mission, which also drops the ball onto the lower playfield.

Kickback will be active when you first launch a new ball, but once you have used it once it will de-activate for whichever side was used. To re-activate it, complete this mission by shooting the ball into the kickback lane (shown below) a total of 5 times. Once you complete all 5 lane hits, it will re-activate kickback on both sides. 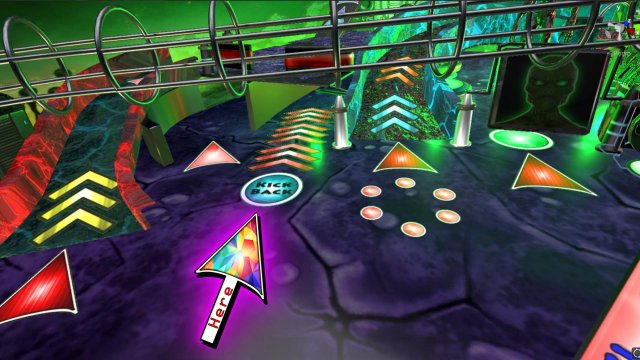 Outside of the starting skill shot that has the flashing green arrow, there is one other timed skill shot. This is a two part skill shot, the first part can be activated at any time by hitting the ball up the left ramp onto the left playfield, and then getting the ball to roll off the back right of the playfield (behind the coil ramp)– both shots have a red arrow to indicate where to shoot. 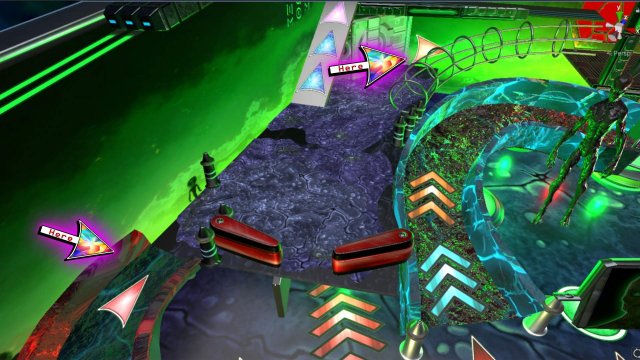 Once you have hit the ball off the back of the playfield it will start a timer to roll the ball through the outer loop. You will have twenty seconds to hit the ball into either outer lane, the ball must either travel all the way to the other side of the table and exit out the outer lane OR you must hit the entrance to either side twice. 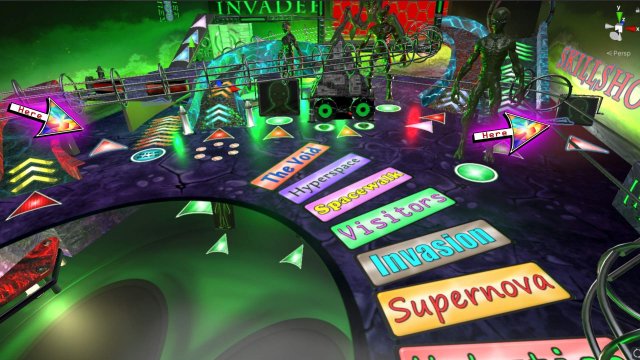