Interceptors – interceptors are small in size, but carries powerful engines which grants them great maneuverability. In addition it allows them to carry heavy armor plates making them most durable vehicles of Blasted Road Terror. Their primary role is to “tank” incoming damage and keep other vehicles safe. Interceptors have small firing arcs preventing them to use medium and heavy weapons effectively. However they are ideal carriers of light weapons as these ignore firing arc limits.

Marauders – main damage dealers of your caravan, they do a lot of damage, their 360 degree firing arc makes them ideal carriers of medium or heavy weapons and the can usualy take hit or two. Unfortunately they are not very mobile and repositioning takes a lot of time.

Attack Vehicles – “Glass cannons” of BRT. These combines the speed of the interceptors and firepower of marauders. In addition, having at least one in your caravan gives you ability to “designate target”. Unfortunately all of this comes with a cost of lowered armor and 270 degree firing arc. 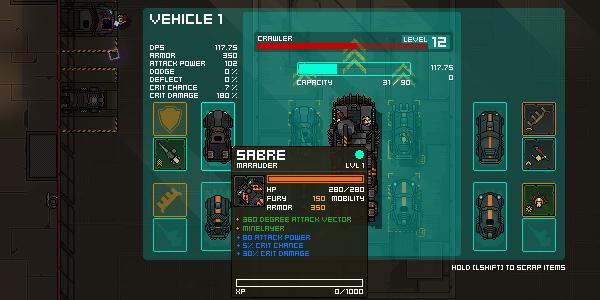 DPS – Raw damage per second value calculated from damage values and number of attacks per second.
EHP – Effective hit points. Base for calculation of this value are vehicle HP and incorporates vehicles armor, dodge and deflect chance figures.

Before we can talk about damage types, its important to understand how HP and FURY works. When vehicle is hit, first the game checks dodge chance, if the dodge check fails, then the game check if there is any FURY, if there is damage is reduced to 50%, after that half of the remaining 50% goes to fury, and rest is going to damage HP pool after passing deflect check and armor damage reduction.

If the vehicle HP falls to 0, vehicle is destroyed and lost forever. The key to success in BRT is to understand weapon damage types and use the right composition.

KINETIC – kinetic weapons often have highes raw damage output. Unfortunately kinetic weapons dont perform well against fury, can be dodged, deflected and their dmage is reduced by armor as normal.

HEAT – flamers or lasers do heat damage. Heat is very poor when dealing with enemy FURY, but it completely ignores enemy armor, so its great type of damage against highly armored targets like Bandit Killervans or Riders Interceptors.

ELECTRIC – Electrifiers or Tesla cannons do electric damage. Electric damage ignores enemy dodge chance and in addition it slows down the weapons mounted on hitted vehicles.

Looks complicated at first, but in fact its really easy. Have enought spearboys or missile launchers to deal with enemy fury first and then destroy them with anything else. If there is a lot of enemies with armor icon, you should equip extra flamer or laser weapon. Most of the time working tactics is to have two interceptors with spearboys and two maruaders equiped with kinetic weapons or one specialized weapon. At least till you get access to specialized weaponary.

Bandits – bandits inhabits wasteland and are average enemies of BRT, some of their vehicles have exceptionaly high fury(fist icon) so dont forget to take enought explosive weapons. They have high armor vehicles as well(dreaded Killervans) so bringing in a flamer or another heat weapons is good idea, however its not requirement. In addition Bandits usualy have quite low HP pools so weapons with high alpha damage can stop them before they ll have chance to do any damage to your vehicles.

Riders- can be encountered during highland missions. The have a lot cheap and fast bikers with exceptionaly high dodge ratings. These are best countered with fast firing weapons as their HP and Fury pools are really low(flamers usualy do the job just fine) or weapons that ignore enemy dodge chance entirely(electric). Another way how to deal with them are damage aura, or minelayer abilities as those ignore enemy dodge chance as well. In addition riders have highly armored interceptors at ther disposal and they ll throw them at you in huge numbers as well, so having one or two heat weapons is kind of requirements for highland missions.

Purifiers – Scourge of tundra! Purifiers are low in numbers however they have wide arsenal at their disposal and you can expect anything when fighting them. Having a well ballanced party with two well equiped interceptors and two damage dealers is key to survive encounter with Purifiers. They are much like your own vehicles and are the first enemies who will try to outrange your interceptors, or use blind spots to avoid your fire. They are not as durable as Bandits Killervans or Riders Interceptors, however they are not as squishy like rest of Bandits vehicles either and pack superior firepower when comapred to every other enemy faction.