This guide is to help you with Goopy le Grande (boss) in Cuphead.

Before fighting Goopy le Grande, I strongly recommend you purchase the smoke bomb from Porkrind’s Emporium. This has saved me from so many possible deaths, and it makes the whole fight a lot easier. A shot upgrade would help, but I managed to beat him with only the default shot, so an upgrade isn’t required. With that said, let’s get into the guide.

Phase One of the Goop le Grande boss fight is rather simple. When he jumps, you can just run away from him so that he doesn’t land on top of you, but I use the dash to get past him. Again, the smoke bomb upgrade is always a good idea. As I said it has saved me a lot of times. Even in the first phase. Sometimes Goopy turns into a giant, blue boxing glove. I previously thought you had to run from this attack, but it turns out it’s much easier. All you have to do is duck. Don’t try to dash through this attack. Even with the smoke bomb. Trust me.

Goopy as a boxing glove.

Before Goopy trasforms into his second phase, 3 question marks appear around him. You can parry these. This is your only chance to parry in the whole boss fight, so make sure you do it if you want to improve your grade or refill your cards quicker.

in phase two, Goopy grows to be much larger thus making his hops harder to avoid. Running under him won’t work as well in Goopy’s second phase. You will probably need to use the dash. I usually run a third of the way under Goopy, then dash under the rust of him. Keep using this method and you should almost be OK with phase two. Much like phase one, Goopy has a boxing glove attack. This time he has a red glove on his hand. When Goopy’s glove appears, you have a few seconds to take action. As soon as you see his glove appear, instantly duck down. Then when he starts jumping around again you can continue with the battle.

Goopy with his boxing glove. 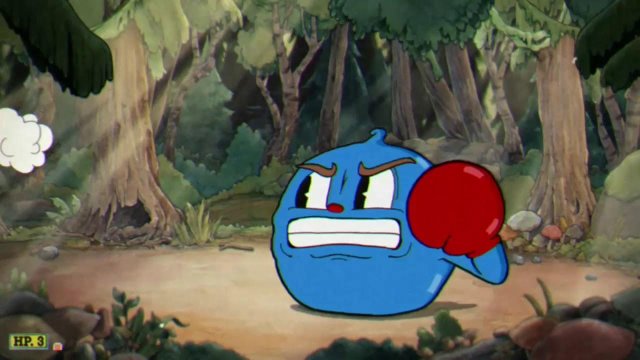 In this phase Goopy’s gravestone will try to flatten you. Try not to get too excited when you reach this stage, as it will only make you less likely to succeed. The stage is simple just follow the gravestone as it goes from one side of the screen to the other. When the gravestone stops and leans back quickly dash away from it. Running also works (sometimes), but it’s best to escape it’s attack as fast as possible. All you have to do now is repeat this. Until you see that highly relieving message on screen that says ‘A Knockout’, then boom! You have defeated Goopy le Grande.

Goopy in his final stage. 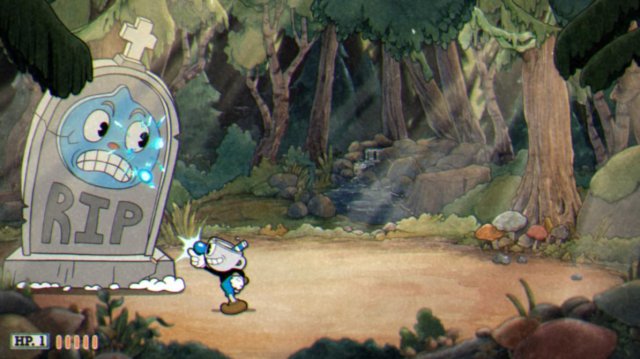 Cuphead – How to Advance in the Game (First Island)

Some Useful Tips Some bosses can make you quit game but here is a quick guide of progression. First, I recommend 8 way shot (red bottle in shop), and the […]

Cuphead – How to Beat King Dice

How to beat King Dice (boss) from Cuphead. Other Cuphead Guides: 100% Achievement Guide. How to Beat Cagney Carnation. How to Beat Ribby and Croaks. How to Beat Beppi the […]