To begin this guide I would like to say that this might not suit everyone’s playstyle and perspective of the game. By that I mean that some might say that this is a way of cheesing the game. However the guide also contains some requirements such as a specific weapon, frame, lenses, widgets and mods for it to work properly so I’ve pinned down in detail below.

Basic farming: The point of executing this technique and strategy is to acquire Focus as mentioned. To acquire Focus standing the player needs to equip a focus lens. The easy way to describe the Focus farming is to:

Explanation of the method:

Advanced farming: Now the aim of THIS strategy is to go sneaky beaky like and stealth kill the enemies in order to receive the 500% affinity buff and keep it going. With Equinox Day-form ability Rest (“2”) the enemies are put to sleep for a short duration and will not be aware of your actions unless you hit them. Therefore we want also the one-hit strike on every enemy target hence Maiming and Finisher striking is sometimes crucial for the instakill. That is the reason for the high damage on the Orthos Prime and not so amazing attack speed, since damage per hit is prioritized. The other reason for Orthos is that its swinging and hitting doesnt affect the movement of the Warframe causing it to stop sprinting or walking which makes it easier and faster to move around and kill everything quickly.

So to pin down what we need and what the build/guide provides:

To proceed with the guide I have chosen to display my gear, in depth technique and strategy for farming the Focus. 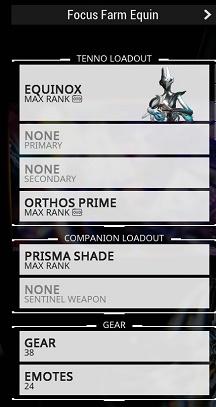 To motivate my setup a bit further I would state that the affinity/Focus gathering is spread between Warframe and weapons and that is the reason for why everything equipped needs to have a lens. To be efficient and economic with lenses here I advice you to only have Melee weapon and Warframe equipped while farming focus with this tactic.

You may also wonder why I have (Prisma) Shade equipped. Well, it is very difficult to always make everything in the room sleep and when I accidentally walk too close to an enemy the sentinel cloaks me.

Picking up the Focus Orbs since they contribute with a buff that helps you the most with the acquiring.

So you get this icon on your display:

To acquire the daily Synthesis amount available while inside this mission you need to follow the requirements below:

The daily cap for this Syndicate is calculated by this formula: (Mastery rank + 1)*1000, so depending on your Mastery Rank the amount of scannings will differ.

To be efficient with the scanning while farming the Focus I advice you to scan and then kill whenever the Focus buff isn’t active untill you’ve capped out your daily standing.

The locations of the 8 partnership fragments found in the updated Jupiter tileset. Other Warframe Guides: Ways to Earn Platinum. All Warframe Parts and Where to Get Them. Quickest Way […]

Warframe – How to Defeat the Razorback (Boss Guide)