A quick rundown about using the M30 Drilling.

Once upon a time, during the North African campaign, Germany supplied their Luftwaffe with a survival rifle, made up of a SXS shotgun with a massive rifle barrel underneath. The rifle was super expensive (and time consuming) to make, so it was scrapped after only a few thousand units were made. Today, in 2017, the full magic of this weapon can be realized in the new Call of Duty.

Rarely does such a skill based weapon come in one complete package. Not only do you have a double barrel shotgun for close-quarters scraps, but you have the power of what essentially amounts to a sniper rifle at the flick of a switch. Master this weapon, and not only will you sit among the few, but you’ll be guaranteed to upset a few players down the road. 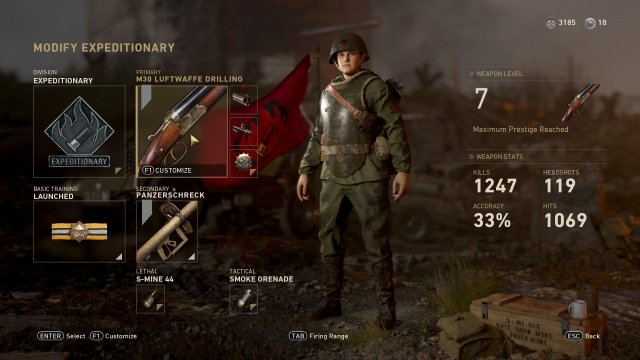 The M30 is one of four shotgun choices in COD WWII. Holding only two shells and having a slow (ish) firing rate, the weapon seems like a poor choice. In fact, most people opt for the Combat Shotgun, given its higher power and its “higher” potential for One Shot Kills (more on that in a moment). However, once you begin to break the weapon down, it’s advantages become clear. Two shells forces you to make your shots count, which may be frustrating for some at first; however, the exhilaration of knowing you’re one shot away from life or death evokes the same feeling as quickscoping. The M30 also has more range than the other shotguns, giving you a distinct advantage in medium range firefights. Most players will assume your range is super close; you can catch these people off guard with your regular shells. Finally, going into ADS mode with the M30 (and all shotguns) reduces the spread significantly. These guns should never be hip-fired unless the situation is dire (someone snuck up on you, someone suddenly rounds the corner, etc). 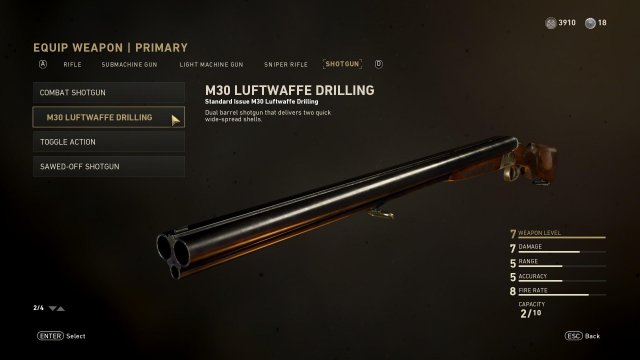 Attachments are pretty standard fare, given the exception of one: the Rifle Bullet. This is, dare I say, one of the best attachments in the game, hands down. From the torso up (from my experience), the rifle bullet is a one shot kill. The bullet appears to have no damage drop off at all, as I have sniped people from across the map on Gustav with it. Two huge factors with the Rifle Bullet attachment; you lose incendiary shells, and you only get six (6) shots with no way of refilling them. The loss of incendiary shells is trivial (they really aren’t strong, trading the one shot potential of your gun for a damage-over-time effect), but the limit on ammo means you have to make every single shot count, because the only way to get more is to respawn.

So, why use this instead of a sniper rifle, some ask? Why work for kills when you can just use a BAR and get em, easy peasy?

The truth is, it’s not competitive in the least. It’s frustrating to use, and you will get outgunned when you start to use it. However, the more you use it, the better you will get, and soon, you can counter-snipe people with it. Getting past the initial hump is the worst part about this gun. After that, it’s smooth sailing. Practice snap shotting, hard aim, and strafing.

Using the M30 comes in (mostly) two types of play:

A. Run and Gun 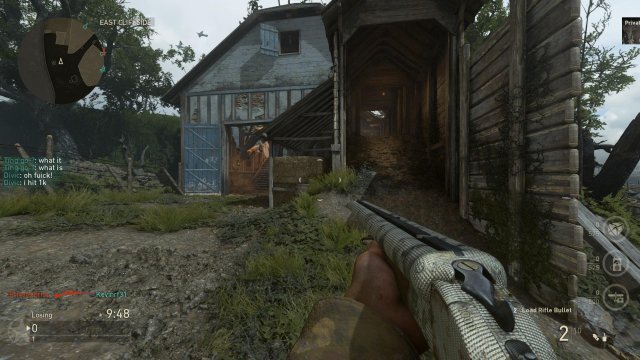 Take the barn on Point Du Hoc. The barn has four major entrances, two on each side of the barn itself. You can plant a maximum of two mines at a time. Depending on spawns for the enemy, mine up entrances and put your back to your team. Use your mines to control the flow of traffic to the entrance you want people to run towards, kill them, take some more mines, rinse and repeat. 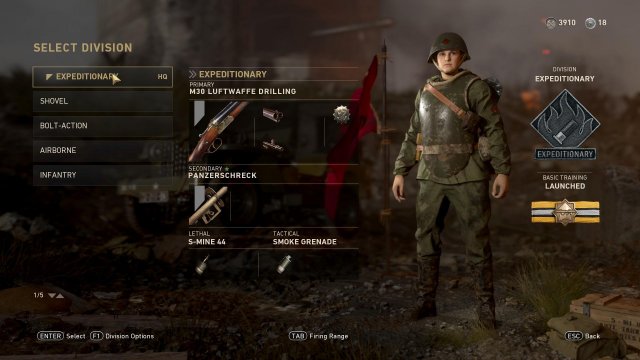 Typically, I continue to use the Expeditionary division for the M30. The incendiary shells I can care less about; however, refilling Lethal and Tactical grenades from dead enemies is paramount to the way I play. Again, this is not the de facto way to play, but it’s the method I find most effective, given how quickly you die in game. For equipment, I end up taking Mines and Smokes, because every kill refills both of these, regardless of the method used. So every time some fool runs into my mines, I get another one for free. For basic training, I grab launched and the panzershrek. Kills from your shotgun and rifle bullet will refill your launcher, which can be used to for killstreaks and (more importantly) people.

Montage of kills with this monster. I wish everyone luck with using the M30, and hope you find it as fun as I do.

Call of Duty: WWII – How to Get Snipers Diamond

This guide will show you the easiest way to get every sniper gold in COD: WWII. Other COD:WWII Guides: All Memento Locations. All Headquarters Easter Eggs. Easy Diamond Camo. M30 […]

Call of Duty: WWII – Tips for Getting Gold for M1 Bazooka