A comprehensive guide to Mission #1 of Rogue Trooper Redux.

You’ve landed! It’s time to tackle Nu-Earth! At the beginning of the level in the top left hand corner, you will be given your first set of movement instructions. Make sure to keep note as these suggestion will only be available in the first couple of missions. Not remembering them could mean Nort victory!

You will almost immediately face your first group of Nort adversaries. Tactically dispatch them with your rifle and head toward your teamate (Gunnar). Make sure to vault up the embankment like a blue ninja. At this point you have some time to get a feel for movement.

Try experimenting with Rogue and his capabilities, as later on you will come under greater enemy pressure.

Head on through the cavern where you will face 3 Norts. Kill all 3 utilising your surroundings for cover and keep heading through until you get interrupted by a HUGE drill machine. You should automatically take cover and be able to use the small barricade as a means to take out the approaching Norts. Use ‘action’ for blindfire.

Blindfire is a good way to force the Norts to head for cover. In doing so you can reload and reposition youself if need be. Using blindfire allows you to protect you body from bullet impact.

A small cutscene shows your pal Gunnar getting brutally executed. At this point you gain Gunnars bio-chip, allowing for your weapon to gain auto targeting. 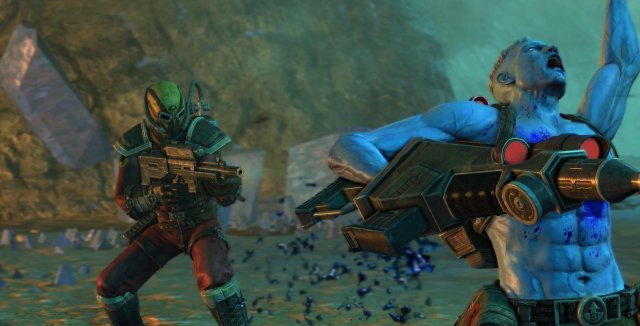 Another small cutscene shows a heavy weapons Nort being taken out by a trooper. Move over to the Emplacement weapon where, by pressing the ‘action’ button, you can equip the heavy gun. A HUGE Blackmare tank has Souther forces pinned down.

Move the reticle over the Blackmare tank gun turrets to lock onto the target then hold ‘fire’ until your weapon is charged fully before releasing to activate. It will take two rounds of targeting to dispatch the tank. Once destroyed, release the weapon by pressing ‘action’ again. 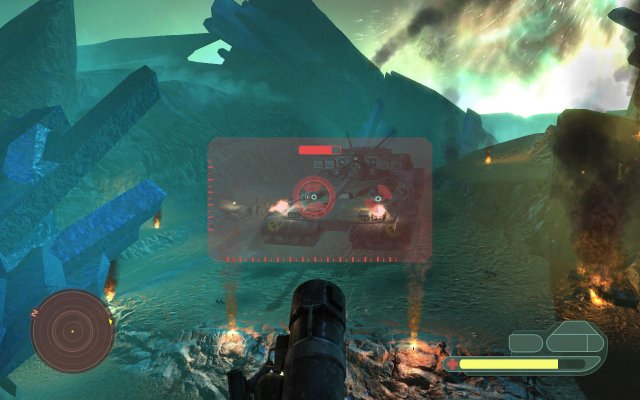 A cutscene shows a ground to air enemy unit shooting at falling Trooper pods. Your fellow trooper (Bagman) survives and your next objective is to make your way to him. It is also at this point you are made aware about damage you have received as a result of an explosion. Use your Medi-Pak to replenish health.

Eye of the sniper!

Take a sharp right and head over the rocks to your pal Bagman. Move on through to where you will face two sets of angry Norts. Utilise a peek and fire approach to minimise damage taken. Meet up with a trooper team and continue through to yet another group of Norts (they’re everywhere!). Once slayed, whilst moving on through, another drilling machine will appear and deploy MORE Norts.

Kill all of the enemies with a carefully placed frag grenade, then turn to head up the hill. At this point you will be given instructions on how to use your rifle scope. Use your scope to zoom in on the stationary gunner and other enemies on top of the hill. Aim for the head and you will kill Norts with one shot which is a good means to conserve ammo. 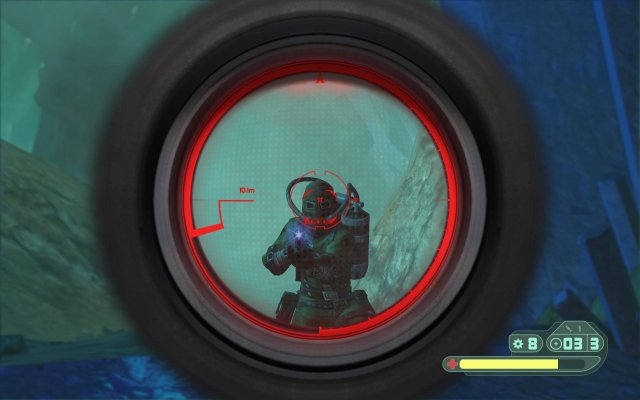 Once at the top of the hill be wary of a Hopper dropping bombs. These aerial units are pretty unforgiving and will wipe you out in one go if you get too eager. Getting too close can cost you a significant amount of health if you’re anywhere near, so wait for the bombardment to conclude. Take out the Nort resistance nearby. By now you should have got to grips with your weapons so go nuts!

Head over to the Flak Cannon and enter by pressing ‘action’. Once inside shoot down the two enemy Hoppers using the ‘fire’ button. It will take 4-5 shots to down each plane. The Flak Cannon will automatically reload if you run out of ammo. Press ‘action’ once you have shot both down to exit the cannon. 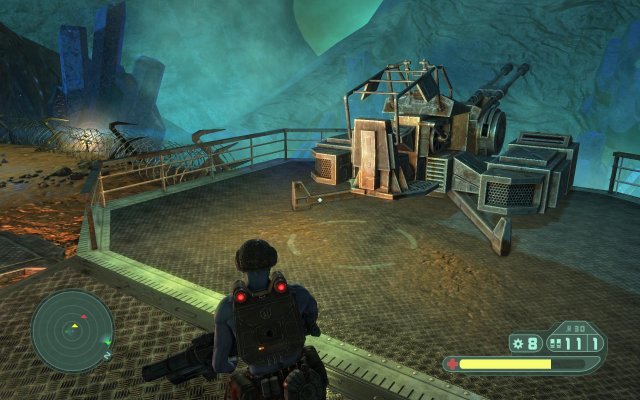 Allow your fellow trooper to blow the gate for you and take out the awaiting Norts.

Head on down to the right of the airship port and take out the remaining Norts. At the bottom of the hill a cutscene will signify the unfortunate death of Bagman at the hands of the drilling machine. You take his bio-chip and the first mission is concluded.

A comprehensive guide to crafting in Rogue Trooper Redux. Scrappy Do’s In mission two you gain the ability to cultivate scrap and use it to craft useful items such as […]