This guide is not written like others, and is more of a story that revolves around key features rather than just stating them. Written as a Guide to Good Business, this copy contains notes from a character that finished the Saturday Shift. This includes tips on finding in game secrets, unlocking achievements, and maximizing cash flow for the restaurant.

There are five store attributes that should be carefully considered before opening up your business. Although your respective company will cover these attributes and what they do, it never hurts to review them more carefully to understand exactly what they affect.

Who would want to visit a store if it was always dark and scary? Not many people, that’s who. That is where the business Atmosphere comes in. The higher the atmosphere is, the more potential customers will want to come in and purchase from your store. More customers means more money for you, but bringing new customers in won’t help much if they don’t stick around.

Customers want to be entertained while they are at your store, and some have high expectations. Do anything you can to make sure the customers have a good time, because a happy customer is a returning customer.

Although you should never hound your customers for every penny they have, some parts of your store could be made more expensive than other parts. When done properly, an activity can be shaped into a “pay-to-play”, where many consumers won’t mind paying the extra money for some extra fun.

Yes, I said it, the taboo of the industry. Nonetheless, we must address it. Some activities are just more dangerous than others and that can make way for injury or death. This leads to lawsuits and costly court fees to come out of your pocket. However, before you go throwing away anything with this attribute, there is a solution to this particular problem.

The ultimate counter for all dangerous products is to offer sufficient health and safety guidelines to blame any resulting accident on the consumer. By being aware of the liability and taking steps to prevent it, you can ensure all of your products, even the dangerous ones, can be used within your facility without the risk of getting sued.

Now that you have purchased your right to show off the company’s brand name and images, you will have a little cash left over for filling your building. Remember, you want the best items in your store, but we all need to start somewhere. If you don’t have a lot of money, we would recommend the “Dumpster Diver Weekly”. If your parent company is willing to reimburse some of your spending, it would be a good idea to try to buy as many of these cheaper items as you can. Careful consideration should be taken before purchasing items from here, as you cannot sell old equipment when you purchase better items. Keep those animatronics in mind though, as collectors are willing to pay large amounts of money to see all characters of a set on stage at the same time.

If your company is offered bonus revenue for employee performance, feel free to allow the employees to play the games inside your store before you open. Some games improve employee performance better than others. We recommend starting with the Duck Pond, as it grants employees the highest performance bonus the out of the Dumpster Diver Weekly. Even a bad pick still gives 100 points, but for those who are lucky, there are also 500 and 700 point ducks that can be found.

Once you feel you have enough of the less expensive items, you should consider buying products from “Stan’s Budget Tech”. We would also recommend expanding your floor space at this time as well. With a larger building, you will be able to place more products on the floor and more customers will be able to visit without any being turned away at the door.

Our personal favorite item from Stan’s is the Midnight Motorist Arcade game, as this $170 item typically grants 2,500 or more points each play towards bonus revenew. Although Candy Cadet offers 6,000 points, the highest bonus available from this catalog, the score earned appears entirely luck based, meaning it is far more common to receive far less than 2,000 points per token deposited.

Now that you have gotten your business going, it’s time to consider the “Smiles and Servos, Inc.” catalog. From here you can find the Deluxe Concert Stage, a must have for all animatronic enthusiasts, and don’t forget about the Star Curtain Stage. Both products can be used at the same time, allowing a total of five(5) animatronics on stage. Remember when we mentioned how collector’s would pay large amounts of money to see a set on stage? This is how! Just make sure you have the full set on stage at the same time, and the money will start flowing in.

Our absolute favorite ride can be purchased from here, the Riding Rockets! Although most of the action takes place in your imagination, your skills still need to be sharp to tackle this beast. The bonus here is one of the highest and most consistent available, as completing the ride grants between 4,500 and 6,000 points.
(A tip for fellow enthusiasts: Enemies that are touching the top and bottom of the view can’t be knocked backwards, so lure them closer to the center to push them back with your blasters. Just don’t let them get behind you, the ship only has forward cannons, and manuvering back behind the enemy again is extra tricky.) 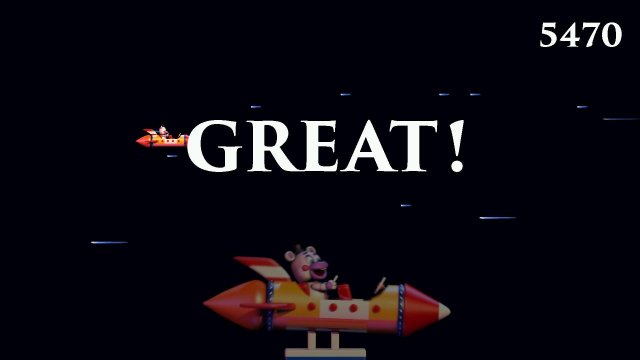 What’s this, a new catalog? Congratulations on finding the next level of fun with the “Rare Finds Auction”. The products offered here are either discontinued or one of a kind! Good luck earning enough money to afford these puppies, but that’s why you bought this guide! By following our previous recommendations for running your buisiness, you should have enough money to begin purchasing these pieces of history in no time.

I made it this far just on wits, but I’m writing down my experiences in case I don’t make it.

Easy enough, no real problems. I didn’t know what they meant by things being in the vents at the time, but I’m glad I paid attention to the instructions anyway. That was the only quiet night I got. Just finish the tasks and move on.

The first salvage was where things got weird. A burned metal bear was in the dumpster next to the back door. I played the tape and got the instructions to check for irregularities while their creepy sound files played. At first nothing seemed to happen, until I looked up from the checklist. The freak had leaned in closer while I wasn’t looking, so I popped the tazer. It slumped back down and I continued the tape until I finished. It only seemed to move when I wasn’t looking at it. The checklist seemed like a joke, it didn’t matter what I marked, they wanted me to bring it inside anyway. I took the $500 and went home.

Still simple, but there’s definitely something in the vents with me now. The motion detector sometimes picks up movement in the area, but I’ve found the audio decoy seems to pick up the same thing when I first trigger it. While working on one of the tasks, I thought I heard something, so I hit the switch on the fan and computer, then pointed the light in the direction of the sound. Good thing I turned everything off, otherwise I wouldn’t have heard the scraping of metal in the vent. I was a lot more careful about reducing the noise I make after that. I need to buy that extra printer and upgrade the internet.

Second Salvage was as bad, if not worse than the first. This time, a gold rabbit thing was there. This guy was a real piece of work, ’cause when I looked up, he’d sat up in his chair. Of course, I tazed the thing everytime it did, but it still gives me shivers. I could have sworn there was a skeleton or something inside it, but that can’t be right, can it? I got $1,000 for the effort.

That was too close. Even with the new equipment and extra set of hands, I can’t finish the tasks in one go anymore. It’s almost to the point that I can’t do more than one task without hearing something and needing to turn everything off. The worst part is that I can’t save any progress with tasks that get interrupted like this. Anything I had been working on needed to be started over. Things are getting really hot inside those vents. If the temperature rose above 110, I think I’d pass out. I’ll need to start having just the fan on sometimes, ’cause the computer can get real noisy, even if it’s not working on anything. I need to be able to hear the things in the vent.

Third Salvage was a nightmare. This one looked like a little girl, but it was a clown too. The way it rested it’s arm on the table was unsettling, even if that was just her resting position. This one didn’t really move it’s body much, so I almost didn’t notice when it started to stare at me. Some controlled shock therapy rolled those eyes back into her head though. I just hope these things don’t remember me when they get scrapped for parts. Walked away with a cool $2,000 though.

There’s more of those things in the vents. They’re coming at me from both sides now, and I’ve only got one light. I have an idea as to what they might be, but it doesn’t make any difference at this point. I just have to keep going. Finish a task, turn everything off, and wait until it’s clear. Start the computer and fan, set the decoy, start a task, turn off the fan, turn off the computer. I won’t let them get me.

Fourth Salvage- Black Bear. Missing an eye? Doesn’t matter, the thing’s gone and I’m still alive. Caught me by surprise on the last audio cue. I thought they couldn’t move unless they were looking at me, but this one was different. I knew I should have let him have it a fourth time. At the very end of the tape, just as I looked down to mark the fifth result, it flipped the table on top of me and bolted. Now I’ve got nothing to show for it but some bruises and a bloody nose, but I know things could have gone worse. You can’t salvage what you can’t find, but I don’t think the $5,000 was enough incentive for me to try. At least I know for sure what’s in the vents.

Just noticed the bear in the Rare Finds Catalog. They were selling it for $5. Glad I didn’t try putting it in the store, who knows what kind of problems it would have caused. It says the thing’s name is Lefty. I’ve gotta focus for tonight, there’s a lot of freaks after me.

No salvage today, and I’m grateful for it. I’ve had enough of this place. I don’t care how much I invested, I’ve gotta call it quits. I can’t get a hold of the enterprise though. Are they avoiding me? Whatever it is, they have some explaining to do with those archived blueprints. It’s funny how this booklet turned into a sort of a journal for me.

I got a hold of the CEO. This is the hardest thing I’ll ever do, but I’m going to work today. I need to use every technique I’ve learned to survive this time. They’re all waiting for me.