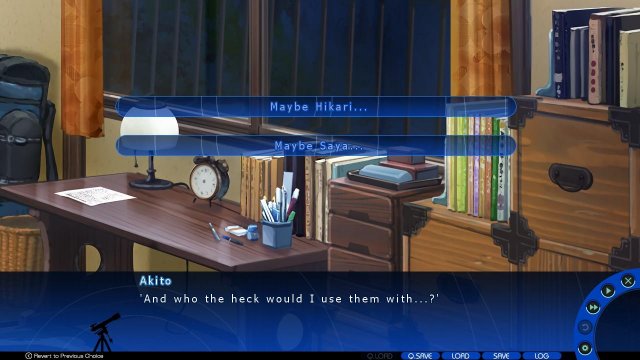 But this is actually irrelevant, you can choose whatever and you can still get either Saya/Hikari’s route if you follow the guide image above.

Thankfully you can choose any routes on your first play in this game, unlike If My Heart Had Wings, so if you’re just looking for story, I can explain each routes but I’ll try not to spoil too much here.

This is based on my opinion by the way, so it might be different from what you expect when you play the route, also this review might be lame because English is not my native language basically.

Playing all the routes? Save the best for last!

If you’re that type of person, just follow this:
Korona -> Saya -> Orihime -> Hikari

Looking a kind of route that you want?

Reminder, these are based on my opinion.

I think this is the best route, the most memorable one, conflict between friendship was an interesting part, there was also a conflict when they almost lost hope of doing something big, the ending was also satisfying.

This route is kind of route that you expect the ending would be, you’ll understand once you finish the common route at least, everything went smoother than in Hikari’s route, there was still a little conflict but I don’t think it was that much of a problem, for me it was kind of boring but some people may still like it, the ending was still pretty good though in my opinion, Also, Saya is cute.

This route had less conflict than the other two, maybe almost no conflict at all, but that doesn’t mean the route is completely boring, it was kind of exciting, love between ordinary boy and lady-like girl, sounds cliche but it was truly romantic in my opinion, the ending was quite bland though, some people might not like it, but it was still good in it’s own way.

This was the shortest route out of all, I think, it felt like I put more hours in each other routes than this one, overall it was interesting, it was all pretty much about the protagonist who supports the heroine towards her goal together, the ending was also quite bland and probably makes you say “that’s it?”, that was my opinion though, some people might still like it.