This official standalone tutorial is more in-depth than the in-game tutorial. It is intended to be used as a reference, help if you get stuck, or if you simply prefer to learn about the game outside of the game itself.

Planets (or asteroids, space stations etc) are core to Orch Star’s mechanics. Except for the player’s starting fleet, ships are always positionally connected to planets in some way. They can never move or exist independent of planets. Idle ships orbit their current planet, and can move to other planets in their line of sight.

When ships arrive at a planet without enemy ships, they start to capture it. Completing the capture requires the ships to remain at the planet for a set amount of time, differing from planet to planet. If more ships co-operate in the capture, it will complete faster. Some ships are better than others at capturing planets. Once a planet has been captured, it is under your control. 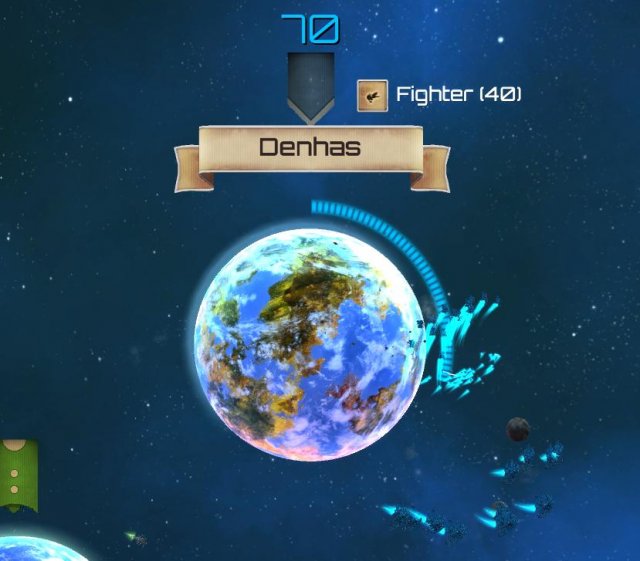 Most planets under your control will produce more ships for you. The maximum amount of ships and ship type differs and can be seen when pointing at planets.For more detailed information about the produced ships, try scanning the planets.

If ships of different factions are located at the same planet, they will engage in combat. Planet combat is automatic; your job is to make sure your ships are at the right place at the right time. Each ship has values for health and shields, which is periodically reduced by the attack value of the opposing ships while in combat. Once a ship has no health left, it is destroyed. 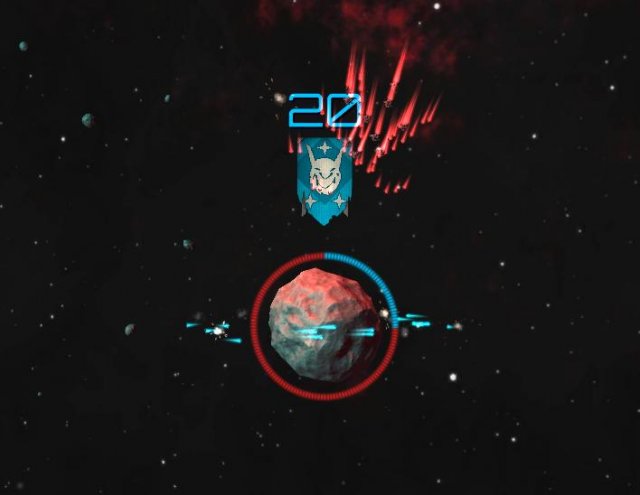 Scenario, mission, level, map, whatever the term, scenarios are the locations and rulesets where games are played. There are currently 12 scenarios in the Campaign, and a few multiplayer scenarios to play. You can also play standalone singleplayer scenarios called Skirmishes. 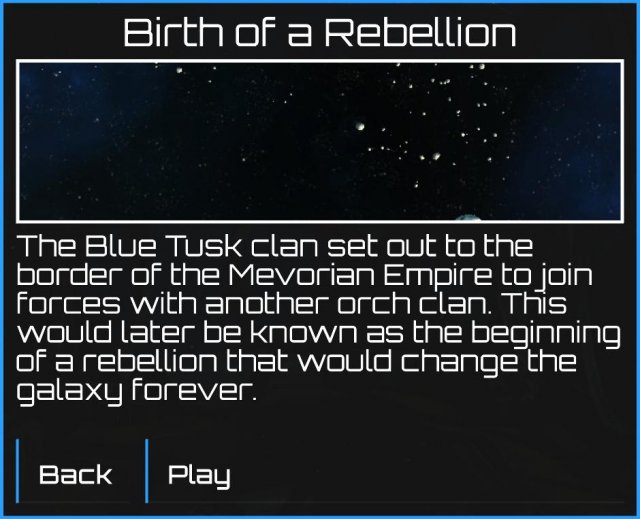 Each faction, or team, is controlled by either a player or an AI (computer). In the Campaign, each faction not controlled by the player is an AI. When playing multiplayer, you can either play against other players or add AI opponents.

Different factions can be allied with each other. Alliances usually go both ways but are sometimes one-directional. For human players, an alliance always means that the two factions won’t engage in combat when having ships on the same planet. AI controlled factions may have an in-between setting, where they have no interest in attacking their ally but will still battle if visiting the same planet. 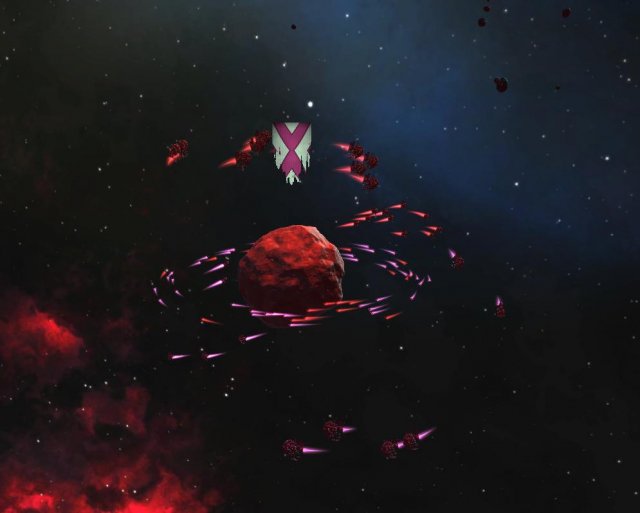 The most common win condition is to erase all enemy ships and/or control all their planets. The two conditions are very similar in that both require you to more or less defeat the opponents. Some scenarios may only require you to defeat one of many opponents or meet entirely different goals such as defending a planet or reaching a planet. Allies usually share the same win conditions and will thus win or lose together.

To communicate what’s going on in a scenario, dialogue is displayed to the player. We recommend that you read it. Most dialogue is however skippable, which is useful if you’re retrying a scenario. To skip dialogue, press the cross in its top right corner. Most dialogue is also displayed with a timer before it’s automatically removed. If you want more time to read, point at the dialogue box to stop the timer.

A common event in a scenario is that a faction receives reinforcements. Reinforcements warp in from light speed then usually move to the closest planet to enter the normal game flow. The advent of reinforcements are sometimes communicated in dialogue, other times they’re used to surprise the player.

When playing in VR, there are three different input modes for the right controller. The first mode allows you to adjust how many ships to send. The second mode allows you to filter which ships to send. And the third mode lets you activate magic spells. Selecting different modes is done by cycling through them. The input button for cycling modes is the small button above the Right Trackpad on Vive, and the B button on Rift.

You can adjust how many ships to send. This can be useful when you want to keep some defence. The input for this on desktop is either left clicking at the slider at the bottom of the screen, or using the Scroll Wheel on your mouse. When using Vive or Rift, use the Right Trackpad or Joystick while in the first input mode.

You can also filter which ship types to send. For example, you may want to only use the quick fighters when moving longer distances. On desktop, this is performed by either pressing the number buttons 1-5 on the keyboard, or left clicking the ship type buttons at the bottom of the screen after you have selected a source planet using the Left Mouse Button. When using Vive or Rift, use the Right Trackpad or Joystick while in the second input mode and target the ship type to filter, then press it down to select.

Once you have acquired ships with magic spells, you can activate them to either create an instant effect or passively enhance your ships. You can only have one spell active at any time, selecting a new one replaces the previous. Some spells have cooldowns, during which you cannot activate any spells. Activate spells by clicking their icon. On desktop, this is used by left clicking them on the spell wheel in the bottom left corner of your screen. On Vive or Rift, use the Right Trackpad or Joystick while in the third input mode and target the spell to use, then press it to activate it. 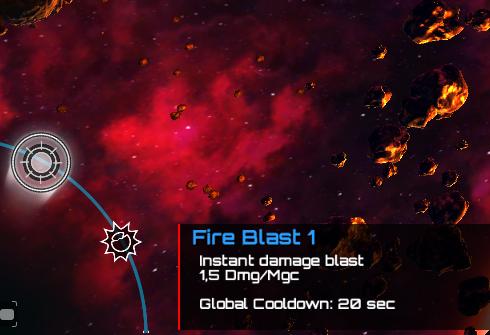 When playing in VR, the informational controls are used as different tools attached to your left controller. You can only equip 1 tool at a time, and cycle through them by either pressing your left Touchpad at either side or flicking your left Joystick to either side. 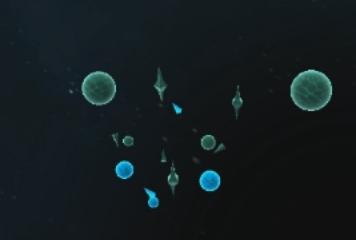 If you want to get a closer look at game elements, you can use the zoom feature. On desktop, you can use the scroll wheel to change the camera’s distance to its pivot (focus). You can also press down the scroll wheel at a planet to focus on it. In VR, the second tool allows you to zoom closer to target planets. This is done by holding the Left Trigger and moving your hand closer/further away from yourself. You can always zoom out even if the tool has no target. 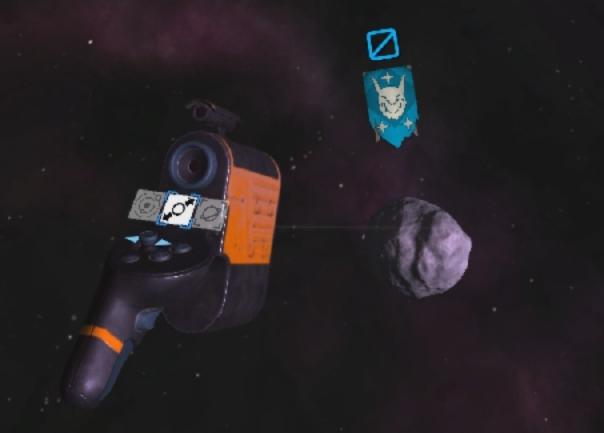 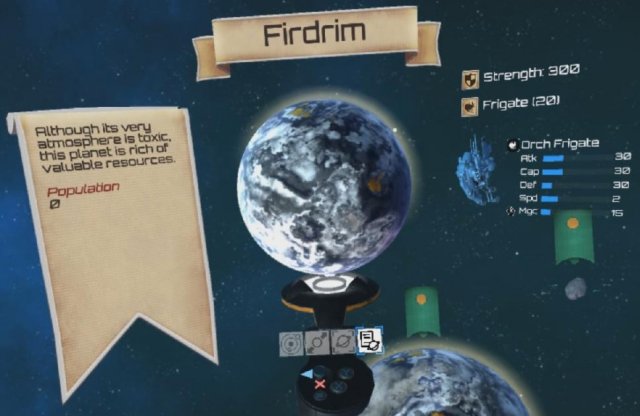