When you first start a new level, you’ll find yourself on your ship, a small distance away from the island you have to explore. First order of business, take a few steps forward and grab the food growing in the planter at the front of your ship. You start each level with an empty stomach, and empty stomach means you start starving pretty quickly. Not exactly what you want. Afterwards, you can go off exploring.

There’s a few things you might want to keep in mind for when you run around on islands. To start with, when looking at any body of water, you’ll generally find fishes inside. With glowy red eyes. When you enter the water, they will try to get to you and start gnawing at you. The damage they deal is no cause for concern, but they also cannot be killed in any way, so it’s probably a better idea to move through water quickly.

The actual first enemies you will encounter are skeletons. They will try to hit you with a little barrage of magic bolts. Not a particularly difficult enemy as long as you keep moving. 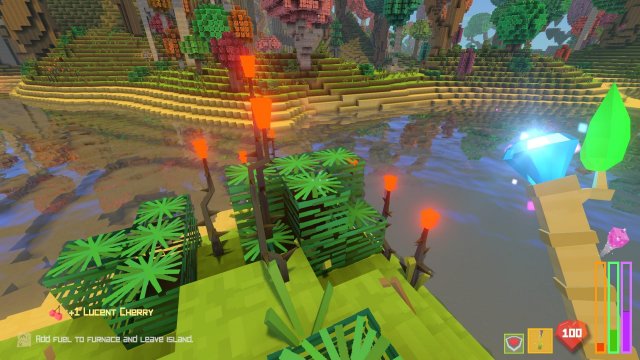 Surprise, they actually are nasty. These things are poisonous. If you run into them, you take a bit of damage and get inflicted with a debuff that either lasts a very long time or doesn’t run out at all until you cure it (not been able to test that). Said debuff prevents health regeneration. To make sure to not get it, other than avoiding the plants you can also burn them to ashes with your spells.

In case you do get the debuff, no worries. In some bodies of water you’ll find a pink glowy plant growing at the bottom: 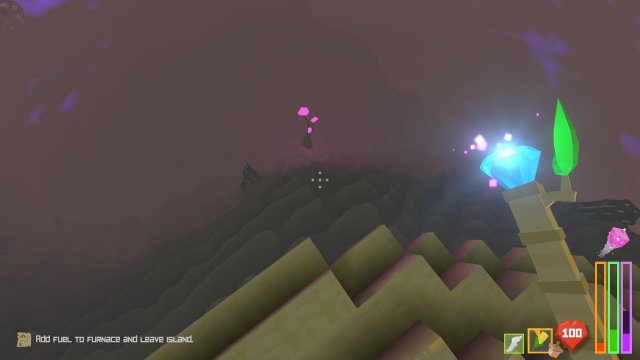 Eat that and your debuff will be cured and you get a protective buff on top of that (which can also be helpful even if you aren’t poisoned). The trauma debuff can also be cured by this plant (Trauma seems to happen when low on health, it reduces mana regeneration).

Keeping these few things in mind will be enough to survive your first day. Night is a slightly different story. When the moon appears and you get the message that a chill is descending onto the island, the ghosts float down from the sky. And you don’t like ghosts, because they’re invincible and, in the event that one of them spots you, they’ll chase you to the depths of hell (That was my first night in this game). But fret not, there are two ways to prevent that: 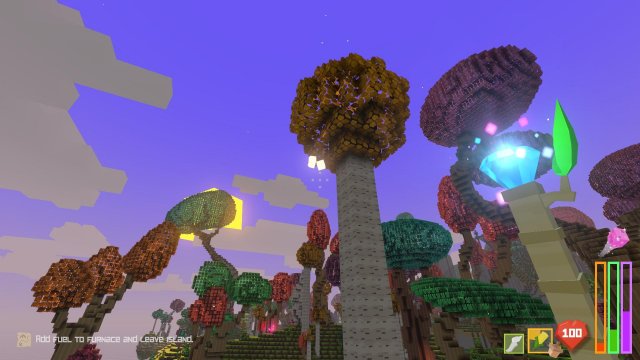 Lucent cherries, your best friend against ghosts. Eat one, and they’ll ignore you for as long as the cherry remains in your stomach (more on that in the next section), leaving you free to run around without fear of getting haunted.

Eating food in this game works as follows. You have two ‘digestion slots’, to call them that. Which means you can eat two food items, which will be disgested one after the other. The important part here is that some food has lasting benefits. The lucent cherries mentioned in the last section are a good example. These benefits apply even while food is in your second digestion slot. In other words, if you first eat a squash and then a lucent cherry, you will be invisible to ghosts until first the squash and afterwards the cherry is digested. Very convenient. Keep in mind, however, that if both slots are full, you will be unable to eat anything until the first food item has been digested.

The first spell you start with is spark shot, a simple projectile spell with a pretty decent range. To get more spells, you need infused gems, as you’ve perhaps read in the game’s ‘How to Play’ section. They are used both for unlocking new spells and upgrading your current spells.

The first thing you should do with an infused diamond, at least in my opinion, is upgrade your spark shot, as that removes its mana cost, leaving you free to jump and levitate around while shooting at things.

I found this a little confusing when I first played, so here’s a small explanation. Jumping costs mana. The longer you hold the jump button, the higher you jump until your mana is drained fully. Tap the button, and you only do a small jump.

Levitating (or you could also call it gliding) is done by holding space while in midair. Awkward part being, if you just jumped as high as possible, you’ll have no mana left for levitating. This can make jumping a little annoying, as you need to let go of the jump button at the right moment to leave enough mana to levitate somewhere.