This guide gives you the drop rates for each crate and which crate you will get depending on your position at the end of a match.
I hope it’s useful to you.

All items found in crates are ‘dropped’ randomly for both free and premium players. Each item in the game has a ‘rarity’ and there’s a percentage chance of that rarity type appearing in a crate. The drop rates for item types are detailed below. As you will see, common blocks will never be found in Protonium or Diamond crates.

All items in crates are random and no items are excluded from free players. Each slot in a crate is individually rolled to determine the item. So, in a 4+4 crate, it is rolled 8 times.

Sometimes when there are promotions such as presents during Christmas 2016, the drop rates will be increased to ensure there is a higher chance of them appearing in a player’s Reward Crates. When this is done, the chances of other items appearing is offset accordingly.

After the slot rarities and items are rolled, they are then sorted in order of rarity; with legendary items being randomly placed first. Then, one of the two rows (front row is free, rear row is premium) is chosen at random to be the start for the item drop and all the items are dropped in alternating rows starting with the chosen row. So, for example, if two legendary items were rolled, they are guaranteed to be in different rows.

In Play Vs AI mode, you will receive the following Salvage Crate reward based on your final game score position: 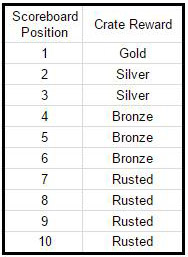 Also, the crates from AI battles have 4 total item slots, 2 are unlocked for everyone and 2 are for premium users only.

In multiplayer team-based games, you will receive the following Salvage Crate reward based on your final game score position:

For battle and league arena, there are a total of 8 item slots, 4 in the front and 4 premium slots in the back.

For Team Deathmatch, there are a total of 6 item slots, 3 in the front and 3 premium slots in the back.

For Elimination, there are a total of 4 item slots, 2 in the front and 2 premium slots.

I feel like this is outdated because I haven’t been getting many robits out of crates recently but whatever, it was on the website so I thought I might as well put it on here.

Robocraft – Tier List of Every Single Parts in the Game

Tier list of every single highest tier part in the game. I’ve played this game with each and every single part for quite a bit, but do not take it […]

The current Robocraft damage mechanics make literal bricks tougher than carefully built bots, so here’s my proposition on a new damage system. Why Different Damage Mechanics Would Be Preferable Damage […]

A short guide created in the hopes of improving the quality of experiences with robocraft gameplay. Introduction Robocrafts’ simple image was born of a simple want by its developers: originally, […]