In this guide I will go over a passanger mission route I used which is also very close to Sol.

In this guide we will be looking at a passanger route that I have used to make my money and buy both a Anaconda and Federal Corvette. The amount you make depends on the amount of cabins you use. On average, in my python with 104 cabin slots I make roughly 30 – 40 million credits a run.

A few things before we get started:

Now that you have a ship outfitted with economy class passanger cabins you want to head to LTT 2684. It is only 113 LY from Sol so it should be fairly easy to get to. Once there you will notice there are quite a few different stations here. 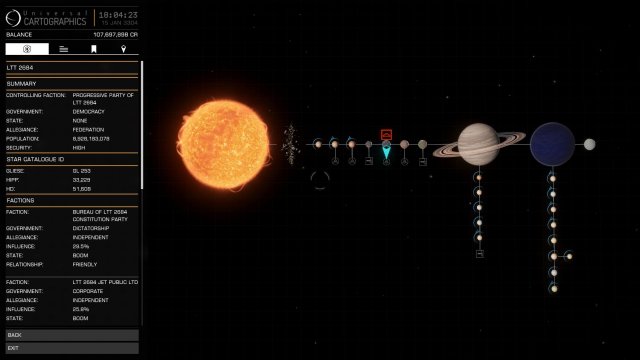 My advice is choose a station and stick with it. I origionally went with Parsons station but now I dock at Lindsey Orbital. Once there you should be looking for missions going to Namorodo which is 13.3LY away. The missions you are looking for are the Tourist or refugee looking for transport missions like this one 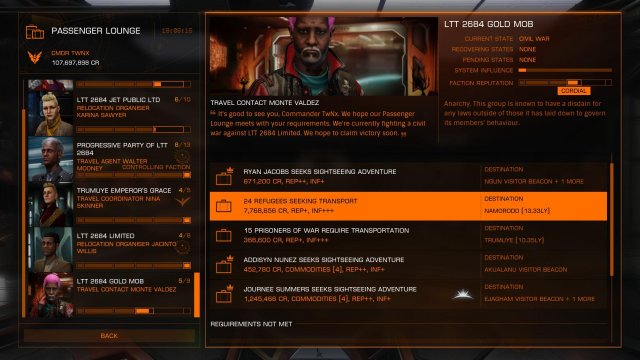 Namorodo only has one station (Sevastyanov station) which is about 480,000 LS away from the arrival point which will take about 20 minutes of flying time. I do want to warn you that people will try and indertict you while flying. This will usually happen as you enter the system and as you approach the station.

Do note there are other missions going to Namorodo where you transport a specific person, I generally avoid these as they take up a whole cabin and sometimes they may be wanted so it is risky to transport them. 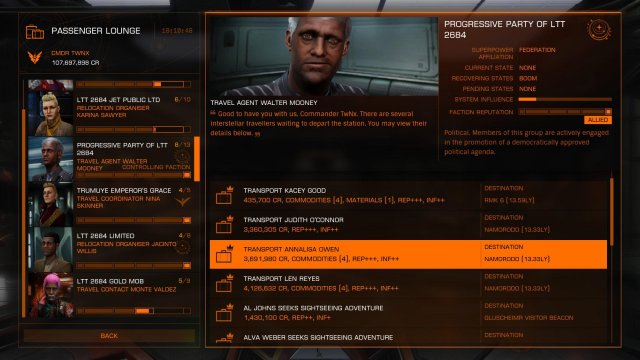 That is about it! It is a fairly simple route once you get started but I would like to share a few things before you go.

Firstly I did this route in a python and then bought an anaconda. While I got a lot more cabin slots with the anaconda I spent more time board hopping to fill up the ship so I went back to using a python. Yes I was making less money a run but I did get boring waiting on missions to respawn to fill up. Secondly I haven’t checked the two outposts in LTT 2684 for missions however I assume they will spawn there as well. Finally If you are finding the missions to be spawning rather slowly fly to another station. You might find one or two over there. I have some success doing this.

If you want to be a bounty hunter, but are either completely oblivious of your objective, or simply wanting to know more, this guide is for you. ContentsPreparationShipsRecommendedSatisfactoryIll-AdvisedHardpointsModulesEssentialRecommendedOptionalThe ObjectiveFinding wanted […]