A simple step by step guide to farming Sentients for Vengeful Revenant and War parts.

Introduction and Why Farm War Parts

First off major spoilers if you have not completed the quest The Second Dream. Turn back now! You have been warned.

Now that that is taken care of, why farm War parts from the sentients? This is a question I have been asked a lot by players in random public matches because TSD already gives you a Broken War at the end of the quest which can then be used to craft War.

But if you are like me, then you understand that the free Broken War you get already has an Orokin Catalyst installed (20p!) and if you want to own both Broken War and War, you have to either buy the Hunhow’s Gift bundle (516p!) or farm sentients to craft another Broken War in order to craft War (yes very confusing, I know).

The parts, while named as War Blade and War Hilt, are actually used to craft Broken War. Vengeful Revenant is also a rare sword stance mod that you can get via this farming. All of these drop from sentient Conculysts.

Keep in mind you need 2 War Blades and 1 War Hilt. 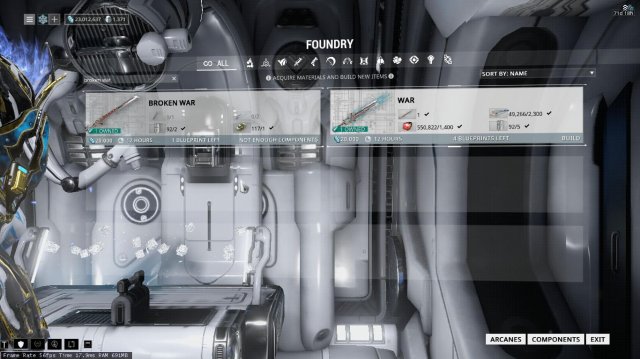 Would have looked better if I actually had War parts but whatever.

First and foremost you need access to Plato, Lua. 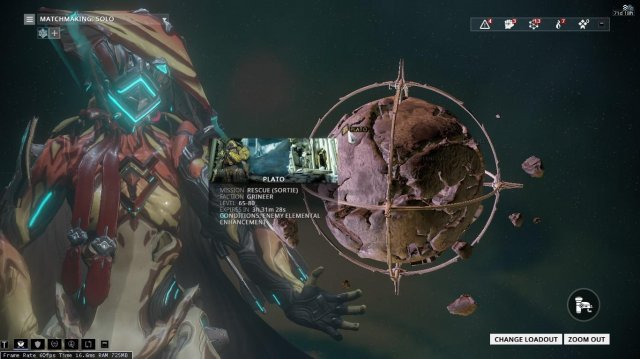 If you got this far and are wondering why you do not have access to Lua, then you probably did not heed the spoiler warning at the very start. 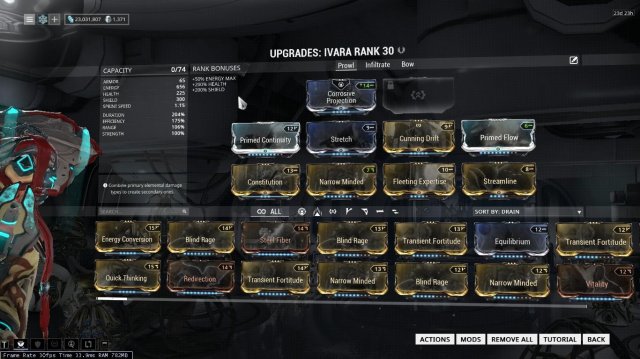 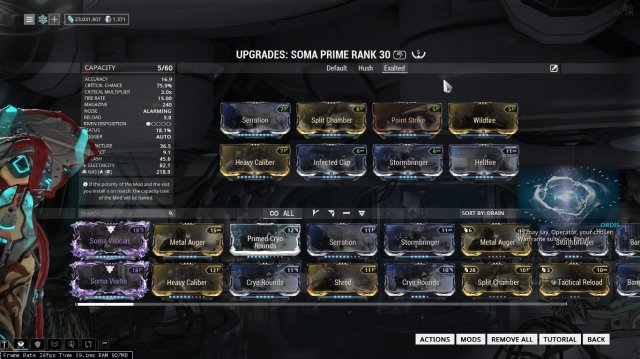 To be honest you do not need a 5 forma Soma Prime, just about any primary rifle will do. Ivara’s 4, Artemis Bow, is affected by primary weapon mods, except shotguns. We will need Ivara’s 4 to take down sentients quickly. So you need to put as much damage on it as possible.

We need four Ivaras because each Ivara will pickpocket a Conculyst in Prowl once leading to four loot drops plus an additional fifth drop when the Conculyst is killed.

Sentients spawn as (a+1), where ‘a’ is the number of players in the squad so max spawns will always be 5. Conculysts themselves may spawn anywhere between 1 and (a+1).

With a party of four Ivaras, if ‘b’ number of Conculysts spawn then you can loot them a total of (5xb) times. To be honest, Conculysts spawn a lot less frequently than Battalysts so don’t expect to see 5 Conculysts often.

Go to recruit chat and recruit a party of four Ivaras using:

Where X is the number of Ivaras missing from the squad.

Once you get a party of four ready, make sure session is set to “Invite Only” and start the Plato mission on Lua. “Invite Only” helps avoid random people and also allows for fast aborts for the whole team if no Conculysts spawn or if the mission bugs out. 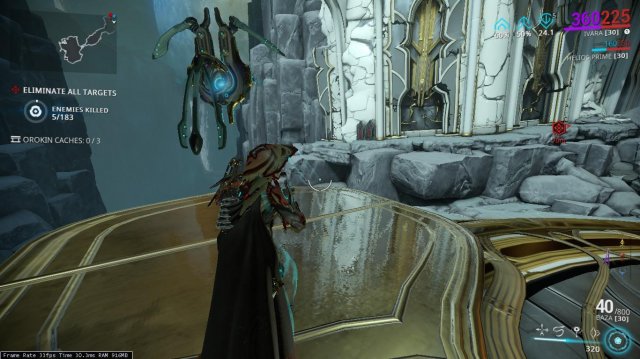 At this point use Zenurik to genereate some energy or drop energy pads.

Once the screen flashes and the Lotus announces the Oculysts, check the mini-map. Once the Oculysts start scanning enemies, a blue dot appears on that enemy.

If you do not see a blue dot on the mini-map, then Oculsysts likely did not spawn, in which case it is faster to abort and start over than look for them.

If the blue dot appears it is a sure indication of Oculyst spawn. They will always spawn in the closest tile with enemies. The host then runs to them while the rest of the team stays behind. The host shoots any Oculyst and quickly runs back to the waiting team. 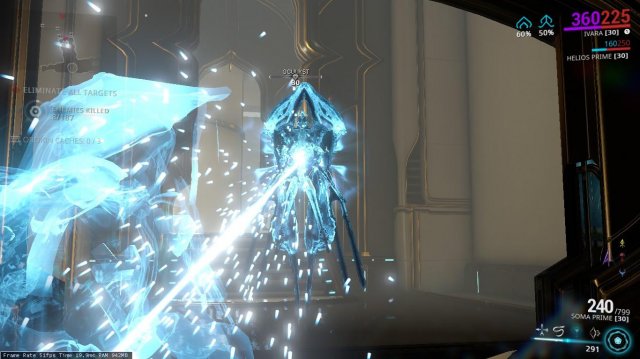 Once the host gets back to the team, everybody enters Prowl. I cannot stress enough how important this is. If at any point any player is not in prowl and gets detected by any sentient, the whole team will get butchered quickly. 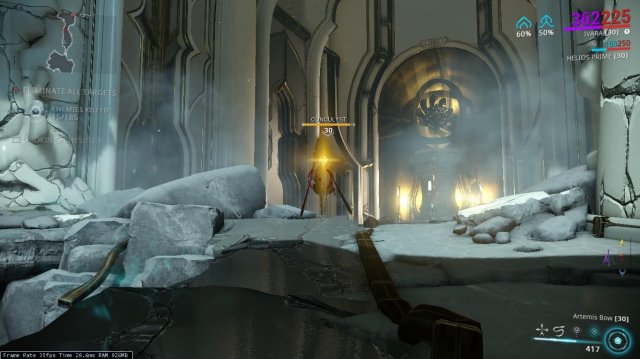 If no Conculysts spawn, then abort and start over. Pickpocket each Conculyst and just say “done” over chat. Once you get four dones, then just kill the sentients using Ivara’s 4, Artemis Bow.

With the Soma build above, it takes 3 shots to kill each one (but only really need as much damage as possible and Operator’s void beam strips their resistances as well). You need to watch out for Battalysts when they start their disco ball attack, just get as far as possible.

Now that you pickpocket each Conculyst and cursed at your luck for not getting Vengeful Revenant nor any War part, rejoice in the number of neurodes you got: 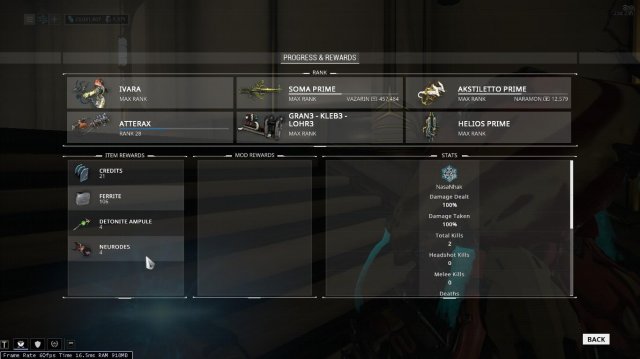 This is just from two sentients, a squad of four can get 7-16 neurodes in a single run, without a resource booster mind you. With four Ivaras, the exterminate mission runs pretty quickly so I recommend finishing it.

Just look at all the neurodes I have now: 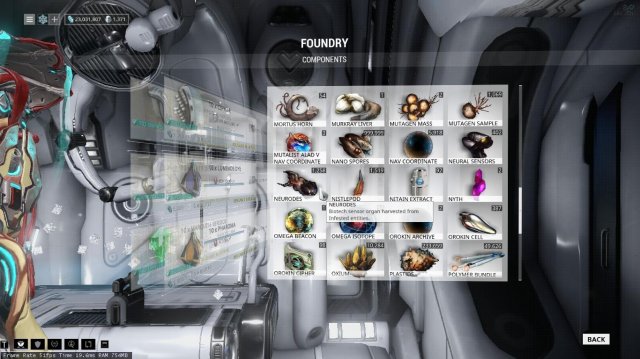 I kid you not, Vengeful Revenant and War parts farm is THE most time consuming farm in the entire game. It took me a solid 3 months to get everything, running this Ivara farm method every 3-4 days.

The Official Drop Tables state the drop rate for Vengeful Revenant at a calculated 0.00417% for each Conculyst looted/killed (if my math is correct). The War Hilt and War Blade drop rates aren’t even listed.

No there is no such thing as farming Stalker. You just fight him and curse at him for not dropping the Broken War BP for months and months. 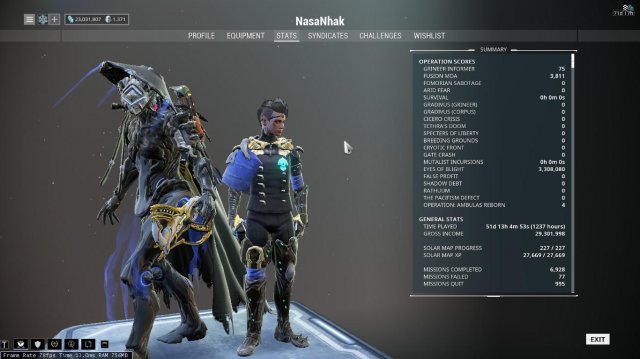 At 1,237 hours of in-mission time, the only Stalker drop I am missing is Scimitar Engines. I refuse to believe people have not gotten Hate and Dread and other BPs despite having been playing for 2+ years. If so they did not play correctly. 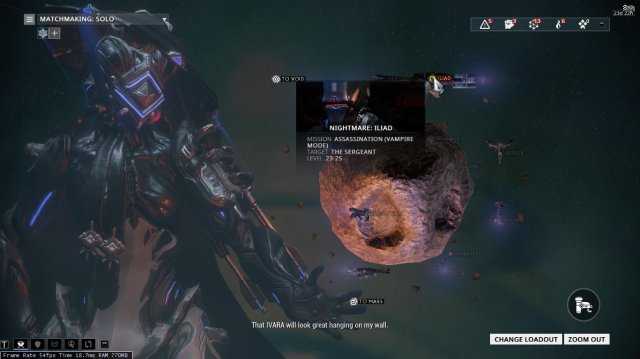 There have hardly been days when I did not encounter the Stalker while having a Stalker mark. So just hang in there, you’ll get them drops eventually.

Have you ever wished there was a better, more reliable way to get Argon Crystals? Well now there is. Other Warframe Guides: Plains Of Eidolon Resource Farming Locations. Somachord Fragment […]

To begin this guide I would like to say that this might not suit everyone’s playstyle and perspective of the game. By that I mean that some might say that […]

In this guide i will show all the locations and best path to take to find all the hashes in the Orb vallis. Other Warframe Guides: All Cave Locations (Orb […]