There’s only really a few good spots worth traveling to in battle that I found but there are a bunch of other spots that aren’t as well known but are more for a CB or showing off than an actual game (unless you’re really stealthy or the enemy is extremely tunnel visioned).

I did most of my tests in RB this time with my leo that doesn’t have all upgrades, so i cant verify how well some of the spots work in both gamemodes, so i leave that up to you to decide. 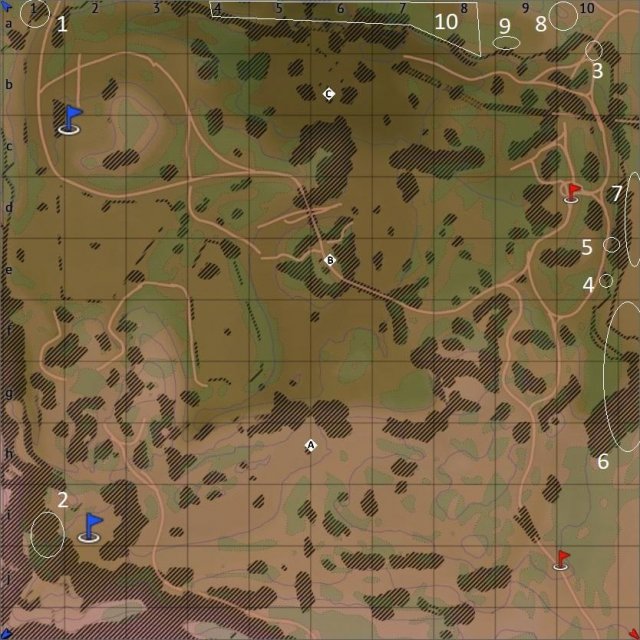 1) Starting out with more of a “showing off” spot, heading to the far northeastern corner will present barriers with a slanted rock that acts as a ramp as long as speed is good enough to make it over.

After that, there is another slanted rock that you have to wedge your tank past to get to the bridge

Once you’ve made it past there, you can now roll over and onto the bridge, if you think the enemy team is tunnel visioned enough, you might be able to get over there and stay there and possibly get some kills as well

2) After that, we also have the cliffside that i have only been able to get onto using the MBT-70.

3) Beginning on the western side, there are many different points that you can access the hills behind spawn.

4) Many of these rocks can be climbed by tanks that have all the engine upgrades, some tanks without upgrades can climb them too, but with much more difficulty since their grip on the ground isn’t as good.

5) These rocks, IMO, are probably the easiest to climb in AB, somewhat harder in RB but still work with tanks like my MBT. You can take either straight or right arrow to get onto the hills.

6) If you don’t think your tank can climb the rocks around the map since you might be driving something like, an IS-3 or FV4005, there is also a simple hill you can roll down and get onto the hills behind spawn as well.

7) After that, we can get to the sniping spots around the area, beginning with this giant stretch of rocks behind spawn that act as cover for tanks and work well with ATGMs.

8) After this, we can move around the Northwestern corner of the map and head to the sniping spot overlooking B.

9) Moving a bit further down, there is also another spot for attacking B and possibly A and C, this spot is also great for ATGM users that like the swingfire and striker.

10) After going past those points on the map, you can really go as far as the hill down to C at the enemy spawn, the map border countdown starts at around where the rocks with the red line are at, so you have quite a distance you could travel before boundaries kill you.

Im not going to include a counterattack section, since there isnt really any spot for either side to counterattack the other from these spots across the map.

Two thing i did want to point out were the fact that the entire hill up to A is climbable, so attacking the sniping spots there is possible.

And the last thing to this would be that there is another easy spot to get to the Western side sniping area, but its far too open to be a viable option for counterattacking unless you were incredibly fast on your tracks.

This guide is intended to help you become a better pilot, and hopefully decrease the odds of you crashing into the ground. Guide to Aircraft Basics in Tips Tip #1: […]

This guide is a collection of basic tips and tricks to make your tank experience more enjoyable. Useful Tank Tips Tip #1: Look both ways before crossing Don’t blindly travel […]