This guide will focus on tips that newcomers to the game might find helpful. If you’re an experienced player, then this guide is not for you!

Other Slay the Spire Guides:

You don’t have to pick up loot: After you’ve defeated an enemy you are rewarded with loot. This can include gold, relics, cards and potions. Do not feel like you have to pick everything up. The most important things is to skip cards. Most successful runs are because you have a solid and consistent deck. When you get to pick between 3 cards and you feel that none of them fit your deck, then don’t pick them. You’d rather want a small deck with good cards that synergize with each other, rather than having a big deck with amazing cards that doesn’t synergizes. And also, the smaller the deck, the more consistency in each turn of combat.

You can buy relics at the merchant: This one may be pretty obvious for some people, but it may be easy to miss. Each merchant sells a couple of relics (most of them are pretty expensive), but it may boost your run insanely much, so be on a lookout.

You can remove curse cards: Curse cards that sits in your deck can be removed when using “Remove card from deck”.

Elites ALWAYS drops relics: You should remember this one when planning your paths. While elites may be hard to defeat, the reward is almost always worth it due to them guaranteeing a random relic.

You are healed to full health after the boss: You may notice this fairly quickly but it’s still good to know. After killing a boss and moving on to the next level, your health will be filled. So no need to conserve your health if you’re sure you can win the fight.

Start game bonus: If you’ve encountered the first boss in the previous run, you will be offered a list of bonuses before starting a new run. These can include stuff like “Lose all gold, gain a random relic” or “Remove a card from your deck”.

Character unlocks: When you finish a run (doesn’t matter if you win or lose), ater a certain amount of points earned for your character you will unlock new relics and cards. These will be accessible in all future runs.

How Should I Plan My Path?

This depends on what you are after, but in general you’d want to prioritize in this order:

Campfire: This is since you can upgrade your cards and if you need it you can rest to get back 30% of your health.

Merchant: This is a good way to specialize your deck either by removing cards or buying new cards. You can also purchase relics and potions to boost your run. Remember that merchants will always have one card on sale. As a rule of thumb, have at least 75 gold before visiting merchant.

Elites: If you feel confident enough with your deck, try and challenges as many elites as you can for them sweet sweet relics. Most relics will have a insanely good effect.

Treasure: You’d think this would be higher up on the list but honestly since you don’t really know what you’ll get, it’s not that good.

Unknown: This may end up being really good, but it may also be a really hard fight that won’t benefit you at all. So due to the unknown nature of these events, they shouldn’t be highly prioritized.

Enemy: This should obviously be the least of your priority. Regular enemies should only really be faced if they are in your path.

What Cards are Good?

Well it all depends on what kind of build you are going.

In general since you will probably spend most of your early runs as The Ironclad (the first character), you will be going an attack build. When going an attack I have found that these cards work really well. 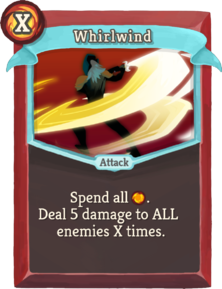 Whirlwind is great since it does amazing damage to ALL enemies, and it works great when boosting strength and energy. 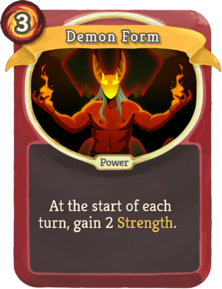 Demon Form is rare to find, but once you have it in your deck it becomes a win condition for your run. After you’ve played it, you can stall the game and then one-shot your opponent. 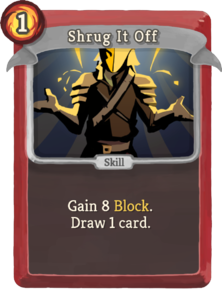 This card is great at defense since it gives you a decent amount of block at a cheap price and it also allows you to draw 1 card. 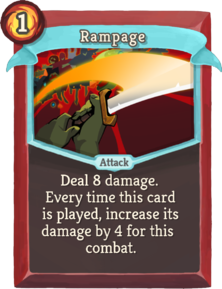 If you have a small deck or you have Headbutt (Deal 9 damage, place a card from your discard pile on top of your draw pile), then you probably want to add rampage to your deck. Since its damage gets bigger and bigger each time you use it, it’ll only take around 1 use until its better than most of your attack cards. 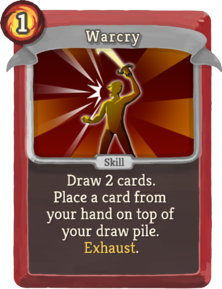 When upgraded, this card is a free draw 2 that lets you put a card at the top of your draw pile, which allows you to plan for the upcoming turn.

There are TONS of other cards that are amazing, but after finishing a run, these cards have always been in my deck.

If you’re going turtle build (lot of defense and slowly paced encounters) then there is a couple of cards that may fit in well. 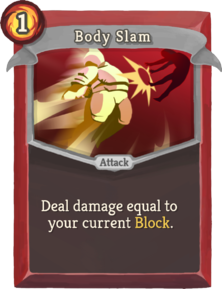 This is a REQUIREMENT for all turtle builds, and I usually go with it for my attack build as well. The reason for this is because in its upgraded version it cost 0 energy. So basically a free attack. This means you can spend all your energy on defense and then use Body Slam to do insane damage.

This one works well in any build since it gives 8 block and 1 draw which is basically a upgraded Defense with a draw. And when upgraded it gives 11 block which is insanely good for 1 energy. 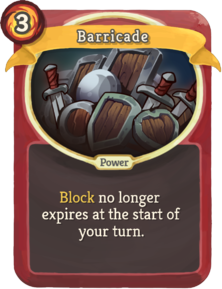 If you are going a defense build then you should definetly pick this as soon as you find it. With this you can keep stacking up block and survive those insane hits from bosses. Also if you’ve saved up a lot of block, then Body Slam will also do insane damage. 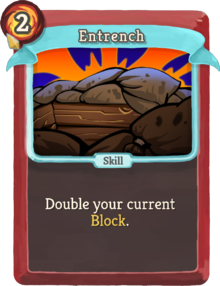 This seems pretty good on paper, but in my opinion it’s only good until its upgraded and cost 1 energy. Since for 2 energy, you are probably better of with 2 Shrug It Of or 2 Defense. But upgraded or not, this card works extremly well with Barricade since you can keep doubling and doubling your defense and it’ll never expire. You can also see this card as a doubling of Body Slam’s damage. 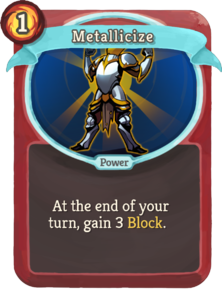 This is also a card that works well with Barricade since it lets you keep stacking up on block, and its also very cheap and you only have to pay for it one time and it’ll be there for the rest of the combat. Although out of all these cards, you’d probably want to prioritize this one the lowest since it’s only 3 block (4 when upgraded) each turn. And if you don’t have barricade then that block will disappear at the end of the turn. But it’s still free 4 damage migation each turn once it has been payed for.

What Relics are Good?

As I said previously, it all depends on what kind of build you are going. But in general:

Juzu Bracelet (You no longer encounter monsters in ? rooms) is amazing since you gurantee ? rooms to be free of monsters, which makes them incredibly useful. If you have this relic you should have a higher priority on ? rooms.

Ice Cream (energy conserved between turns) is good since if you plan well, you can save loads of energy and use more expensive cards during combat.

Shuriken (if you play 3 attacks in a single turn, gain +1 strength.) is great if many of your cards are Attack cards.

These are all great boss relics since they permanently boost your energy, but they come with huge drawbacks. If you’re not that confident, then Lizard’s Tail (if you die, heal to 50% hp instead) always work.

Most Infinite Combos contain 2 attacks which are played in a loop.  I will call these: Cores.  Most Cores have requirements which have to be set up.  I will call […]

Slay the Spire – Tips and Tricks for Getting Started

Before you play the Slay the Spire game, you will definitely want to know these simple but useful tips and tricks. If you have any tips feel free to share […]