This guide describes how to earn all of Natucket’s achievements.

Complete the “Finding the Rachel” quest

The above-mentioned quest is the second main mission of the game and it can be very tough if you haven’t the right crew or if you level up too much before completing it. I recommend completing this mission at level 4-6 by following the next steps:

First, hire a level ≥ 5 Field Doctor and then make sure that you also have a Sailor and a Hunter on your crew. Once your crew is assembled, explore the map until you find the spot where the Rachel is, but be careful not to activate the mission by accidentally sailing too close to the mission icon.

Now that you have the appropriate crew and know where the mission will take place, you’ll need to acquire a surplus of 5 food barrels, which can be done either by hunting some whales or by buying them at the nearest city.

Once you have the required bait, navigate to a point near the mission’s location and save. Next, start the mission and pick the special option regarding using food barrels as distraction; if you’re successful, just read the paragraphs below, but if you aren’t just reload your savefile and try again until you manage to divert the sharks attention. If you’re playing on seadog mode, you’ll have to retreat and try again if you don’t manage to distract the sharks, but if you do so you’ll need to acquire 5 barrels of food again.

Lastly, you’ll only need to survive 6 rounds against an endless wave of sharks. Having a Field Doctor on your whaleboat will increase your chances of survival by a lot, as all Bleeding damage will be denied, thus preventing adullt sharks from using their fearsome Blood Frenzy skill.

During the combat encounter just kill as many adult sharks as possible, only pausing for healing or protecting your crew members if they’re in mortal danger, and the mission wil be over before you know it.

The above-mentioned quest is the sixth main mission of the game and can be completed by either being friendly or belligerent. Behaving peacefully will require you to have a level ≥ 3 Scientist on your crew whereas acting aggressively won’t require anything of you, but if you choose to behave that way you’ll be forced to beat a canoe encounter.

First of all, you’ll need to find the mission’s location, which is situated on the northwestern end of the Gulf of California. Once you arrive there, pick the set of choices regrading the scarlet fever if you want to be friendly or just be a prick to the natives. Regardless of your choice, you’ll be directed to a new location.

This boss is fought in the last main mission of the game.

This will undoubtedly be one of the first achievements you’ll earn. After navigating for a few in-game months it will pop up naturally.

Visit all the cities

Pretty self-explanatory and easy to earn. You’ll get this achievement once you have docked in the Nantucket, Horta, Peterhead, Imbituba, Cape Town, Korokareka and Honolulu cities at least once.

This achievement is really easy to get because it’s cumulative, meaning that you don’t need to create 5 safedocks in a single savefile: you can just create one safe dock, reload your save, create another one and so on until you earn this achievement.

Creating safe docks requires two things: having a level ≥ 5 Helmsman and 30 wood barrels per safe dock. As soon as your captain has enough prestige to hire said crew member, do so and then buy as many wood barrels as possible. Next, save near a mainland location and build as many safe docks as possible, then reload your save and repeat the process as many times as necessary to earn the achievement.

Another self-explanatory achievement: you’ll just need to complete ten tracking jobs, which are listed as Unveil the X’s destiny on the newspaper.

Once you accept a tracking job, a dotted line between the city where the ship departed and the city where it was headed will appear and you’ll find it somewhere in that route. As soon as you find it, one of two things will happen:

Also, there will always be a third option, fleeing the area, but I don’t recommend picking it because your captain’s prestige will be reduced in 1.

New jobs appear every month on the newspapers of Nantucket, Horta, Peterhead and Honolulu, so visit said cities on a monthly basis until you’ve accepted and completed enough tracking jobs to earn the achievement.

Yet another self-explanatory achievement; you’ll just need to complete ten delivery jobs, which are listed as Deliver goods in X on the newspaper.

Once you accept a delivery job, a dotted line between the city where you shipped the goods and the city where you’ll need to deliver them will appear. As soon as you get close to the destination’s town, sail near it until an event regarding delivering the goods pops up.

New jobs appear every month on the newspapers of Nantucket, Horta, Peterhead and Honolulu, so visit said cities on a monthly basis until you’ve accepted and completed enough delivery jobs to earn the achievement.

Complete all the side quests

There are four side quests and all of them are divided in 4 parts:

Discover all the whaling areas and routes

Migration routes are specific map spots where you’ll be able to hunt whales during certain times of the year.

First of all, I recommend completing The Northwest Passage side quest in order to equip your lookout with the Knight’s Hunting Guide special object. Once you do so, your barrelman will be able to spot any whaling areas and migration routes if the ship is near them when they’re active.

There is a total of 12 migration routes and you can see all of them, including the times of the year when they’re active: 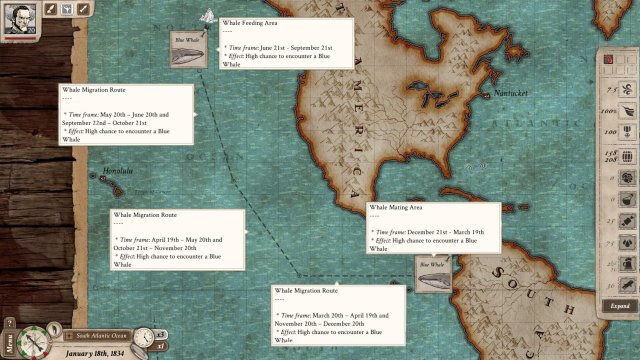 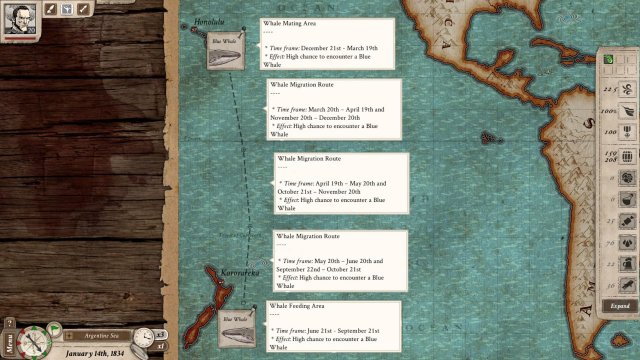 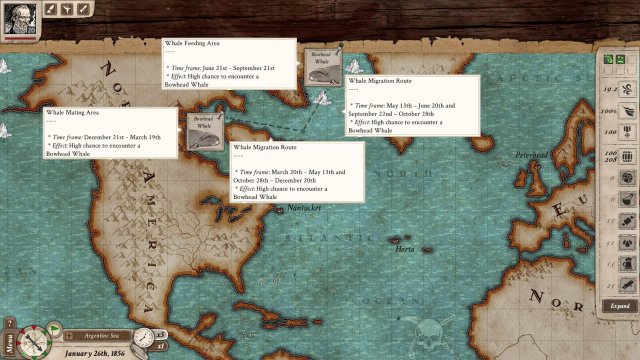 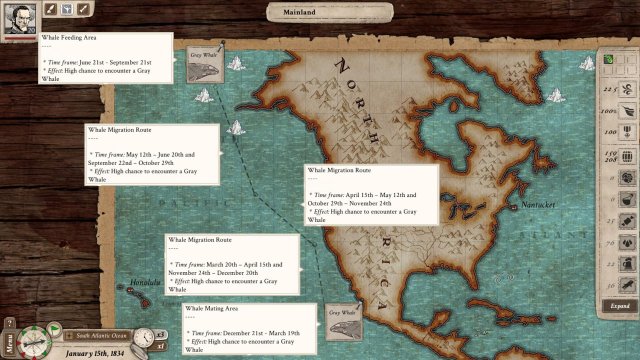 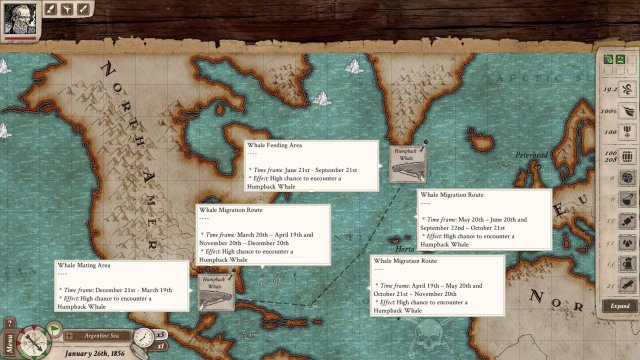 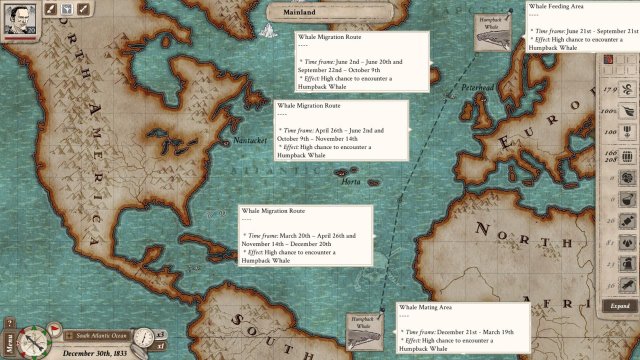 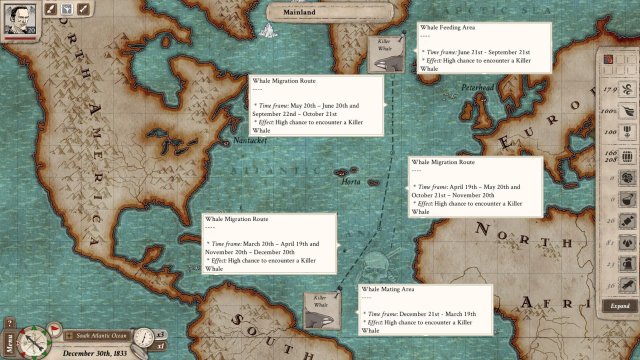 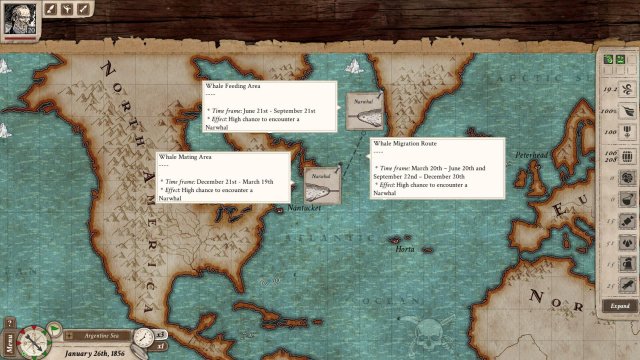 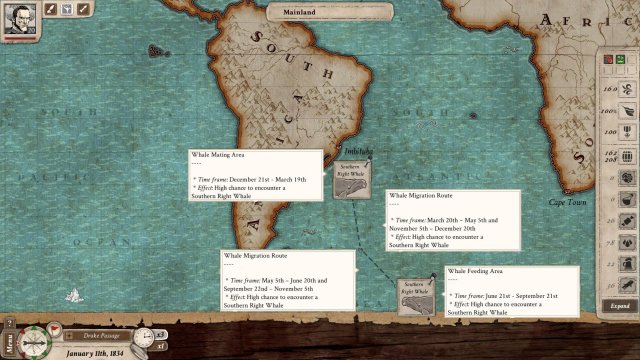 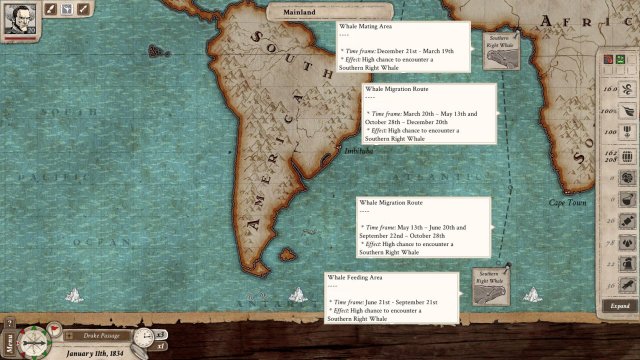 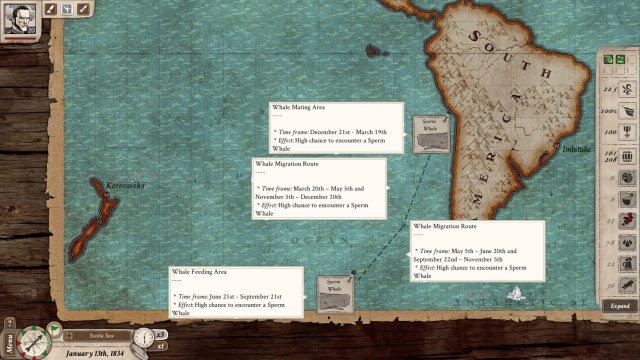 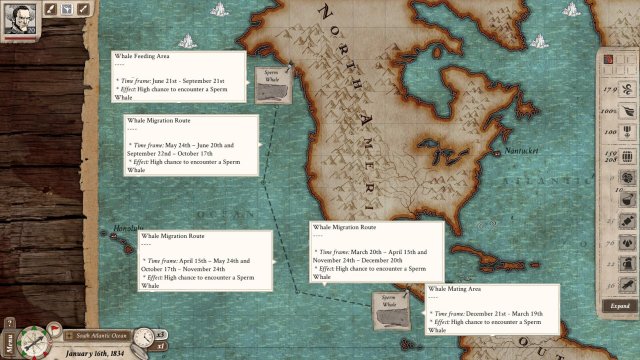 Impossible to miss. During the early game I recommend farming levels by hunting narwhals, humpback whales and bowhead whales because they’re the weakest species of the game, plus their migration routes are close to the starting area.

This achievement will surely require you to farm levels and the best way to do so is by hunting blue whales. I recommend waiting until you have unlocked the last mission of the game to start farming levels, as this will prevent you from wasting the exp gains that the main missions award.

Take a cabin boy up to level 10

Pretty self- explanatory. I recommend either hiring a cabin boy at the beginning of the game in order to turn him into an Oil Master or hiring a cabin boy with the Healthy trait during the late game and turn him into an Harpooner while you do the necessary farming to get the Admiral achievement. If you pick this last option, you’ll need to prioritize protecting your cabin boy until he gains enough levels to withstand enemy attacks without dying.

I recommend earning this achievement during the early game. First, create a separate save file and then stock your ship with as many food, water and grog barrels as possible. Next, exit the city where you bought the supplies, drop the anchor and let the days pass.

This achievement is quite easy to earn, but it doing so takes a long time. The only way to grant crew members the Sodomite trait is by turning your captain into a Sodomite as well. In order to achieve this, you’ll first need to complete a personal quest for a crew member to grant him the Grateful trait. Do note that completing personal quests that involve finding a treasure will not grant the Grateful trait to your crew members.

Level all the ship compartments up to their maximum

There are 5 ship compartments that will require you to hire specialized crew members in order to upgrade them:

Once you have ordered any of the above-mentioned level 5 upgrades, you’ll be able to fire the specialized crew member needed to order it, but I recommend always keeping an Oil Master and a Cook on your crew, as their passive abilities grant great bonuses to your income and crew health and morale respectively.

Self-explanatory and impossible to miss.

I think that this achievement is nearly impossible to miss, as you’ll need to hunt quite a hefty amount of whales in order to level up your crew and earn money, but in case you miss it somehow just sail to a whale migration route and start hunting whales until you get this achievement.

Hunt every type of sea creature

Nantucket features 8 whale species and 1 shark species, so once you’ve killed at least one member of said species you’ll get this achievement.

Legendary creatures are powerful whales that have been nicknamed by sailors, just like Moby D. Every now and then, jobs regarding the hunt of a legendary creature will appear on newspapers, so, in order to get this achievement, you’ll need to complete one of said quests.

Legendary creature hunt jobs are divided in 3 types depending on their level requirement: level 5 jobs, level 7 jobs and level 9 jobs. Said level requirements must be met by your captain, not by one of your crew members.

New jobs appear every month on the newspapers of Nantucket, Horta, Peterhead and Honolulu, so, once your captain is at level ≥ 5, visit said cities on a monthly basis until a job regarding the hunt of a legendary creature pops up.

Repel a pirate board

Your crew can engage in pirate encounters every time they run into a pirate ship, which are found patroling pirate areas on the nautical chart. Pirate areas are zones that appear near the Equator which are marked by a skull and crossbones icon.

Every time your ship runs into a pirate ship you’ll be presented with 3 choices: repel it using your ship’s cannons, pay $200 to the pirate ship’s captain or engage in a fight with the pirates. In order to earn this achievement, you’ll need to choose the third option (or fail when picking the first one) and win the ensuing fight.

Kill an enemy just after he killed one of your man

The easiest way to get this achievement is during a sea creature encounter, but I recommend saving on a separate file before trying to earn it for obvious reasons.

Once you’re ready to try to get this achievement, engage in a sea creature encounter and kill all sea creatures except for one, which you’ll need to wear down until it’s a strike away from dying. As soon as the combat reaches this point, just let rounds pass without doing anything until the remaining sea creature kills one or more of your men. This will be your cue to retaliate and earn the achievement.

This achievement is not cumulative, meaning that you will need to have $10.000 on you in order to earn it. This is quite easy to achieve if you have fully upgraded the Captain’s Cabin and Try-Works ship compartments, as this will increase your earnings by a lot.

Once you’ve upgraded your ship that way, don’t forget to place a level 9 Oil Master on the Try-Works compartment. as this will maximize the amount of oil yielded from blubber, and then farm some blue whales until you reach the required $ quantity to earn the achievement.

Nantucket is a game based on the adventures of Ishmael in the years after the hunting of Mobydick by Captain Ahab of the whaling ship Pequod. This guide explores the […]