Helpful tips to help you get started.

At the start you’ll have to take out a loan and employ a Sales Exec and a Developer. I usually choose people who have at least 120% productivity. They arent cheap, but they will help produce items a little quicker.

I also like to start with 2 Developers so that i can try to start stockpiling parts to get ahead.

Eventually you will get options to employ a manager who i always upgrade to intermediate straight away as this enables him to manage 5 staff instead of 3. Having your 2nd Dev’ auto producing a bunch of parts repeatedly will help you get ahead very early while the other Dev is making “as needed” parts.

I find one graphic Designer is more than enough and having him auto produce parts will get him stockpiling nice and early too.

The Lead dev will initially be managed manually because he takes multiple parts from others stockpile and assembles them into his own parts.

Having Lead Dev on auto will only have him consuming everyone elses spare parts at a time when you will desperately need them to complete contracts quickly, so i stockpile his parts one at a time. eventually when he has one of every part i’ll have him start a 2nd of each. then a 3rd, etc. 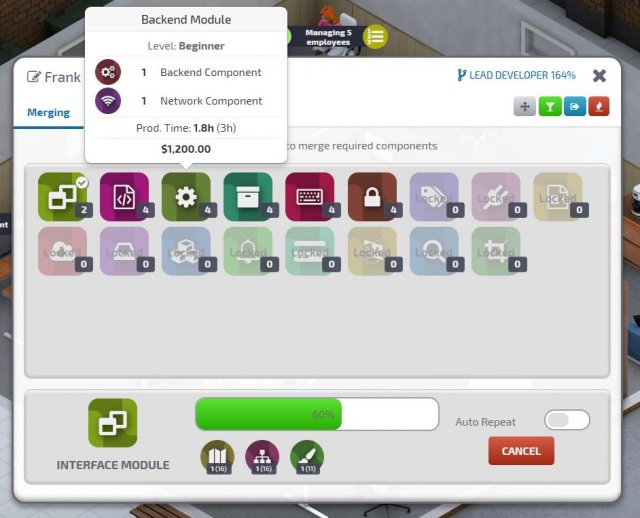 The Researcher is only required when you start creating your own websites, video sharing sites etc, so theres no point creating your own sites until you have researched all the items that go into creating that site. (Eg: secure login, comment feature, image upload, chat features)

There is a lot of researching before you can even start a social media page so this person is best set to Auto. Initially i just have one researcher and only research items required for a social media page. In later stages when you have upgraded an office you can have more staff, and thats when a 2nd researcher will really kick things along. but in early stages when you can only have 8 staff this is really just a background task of very low priority.

Each of these features can be anything from 30 to several hundred research stages before it’s enabled for use on your website.

Once researched you will have 2 different things to choose when you create that product (eg: comment section). i choose the high quality upgrade that comes with a -25% hit, then the other option i choose +20% to offset it. 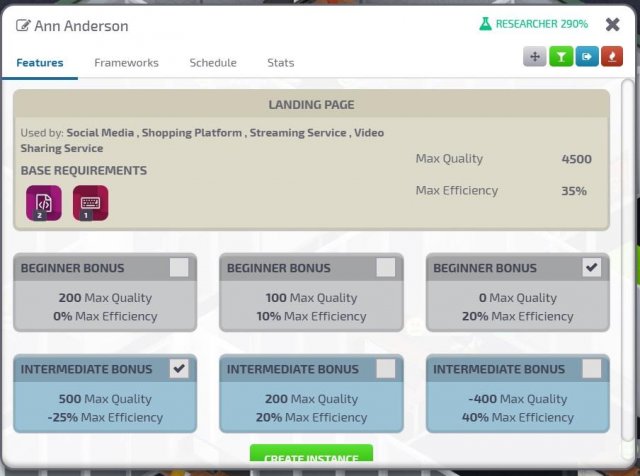 The researcher will also have a 2nd tab thats needed to research improved operating systems to help with Virtual server traffic load. 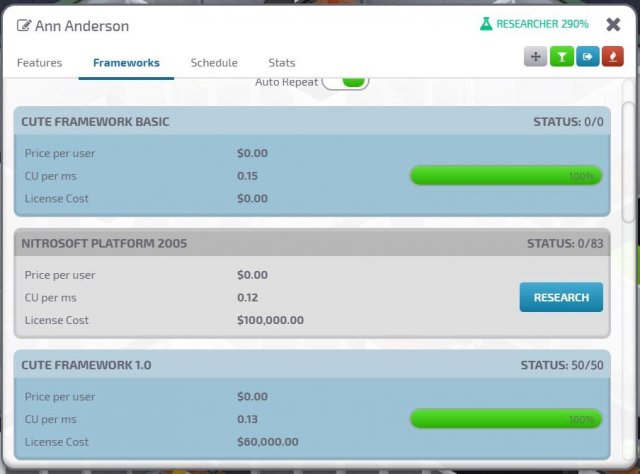 I think DevOps would be better off named “Server Tech”, this guy will research 1 of 3 parts required to upgrade your virtual servers and allow for increased traffic flow. there are small, medium and large virtual servers and each will obviously require more parts. Upgrading server will also require a large number of WiFi components from your Developers. 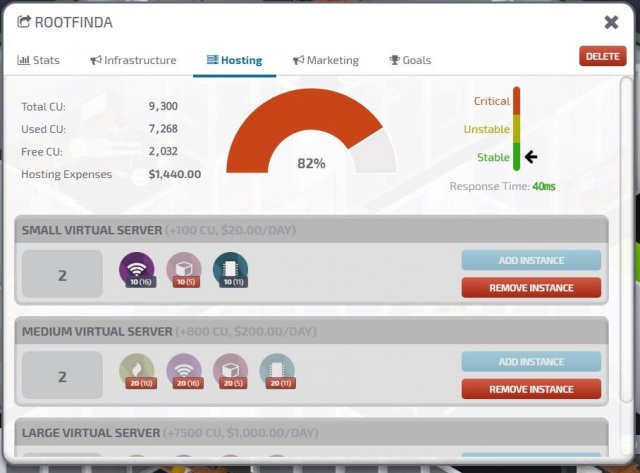 HR can deal with up to 3 managers and all the staff they are managing. they can apparently send people on vacation as needed, but i generally manage this myself most of the time anyway.

Marketer is used to produce parts which are required in the 2nd level of advertising for your chosen website. The first advertising level is money alone, and i usually put what the website is making back into advertising. EG: in the early stages its only earning a few hundred a day so i’ll only advertise at 1 or 200 per day.When it really gets moving i’ll put $1k per day into it, but only from time to time. i still like to enjoy some of those profits.

Eventually when you have enough parts the marketer can use them for 2nd level advertising. 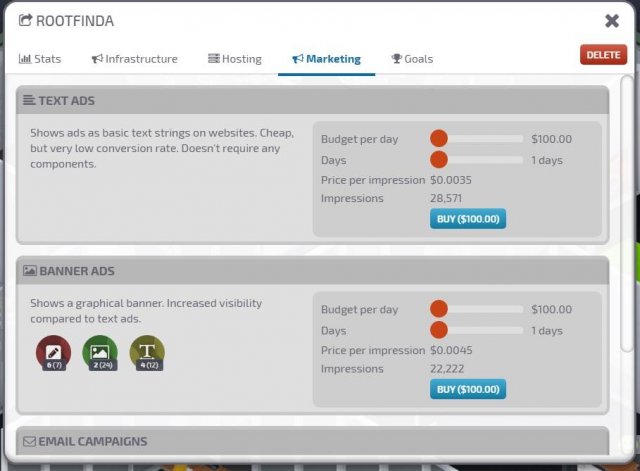 When the smiley face on any staff member turns yellow keep a closer eye on staff, the first day it turns red send them on holidays. sometimes i send people on holiday early to help manage stocks. Lets say in the very early stages you’re dev’s cant keep up with demand, as soon as your Sales Exec smiley turns yellow send him and the manager (if you have one) on holidays, this will help them get in front with parts.

Developers only get sent on holiday one at a time though, as i always like someone to keep up with demand and prevent stocks running too low.

The same can be done with your Designer and Lead Dev. send the lead dev on holidays to get your designer ahead in parts. Unfortunately i do find my Lead Dev does sit idle quite a lot as he uses quite a few parts from everyone else so i only have him keep low numbers of parts on hand (see previous comment re – Lead Dev)

Stockpiling parts is my key to making decent money early on so that you wont have to use bank loans and wont lose money by taking too long to complete contracts causing them to fail.

Always keep at least $10k on hand to cover expenses, incase you get a few low paying contracts. Spending all your money will only force you to take out a loan and waste money in interest just to stay afloat.

These images are from a bit further in the game (intermediate staff in the 2nd building) but you get the idea and it still works the same in early stages.

Instead of being rushed to produce what i need before contracts expire i can usually complete contracts the instant i accept them!

The workers are then managed to replenish stock as it gets low. Stay ahead of the game, rather than always being in a mad rush on the back foot. 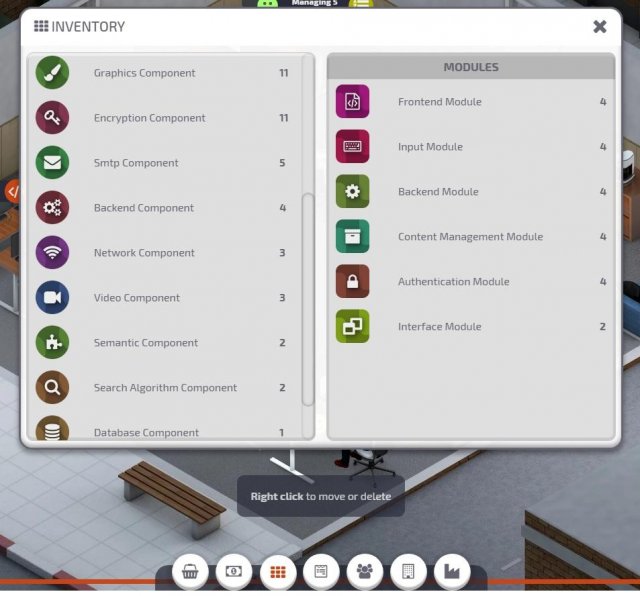 It also means my Sales Exec doesnt need to be on “Auto”, because i will accept a contract, immediately hit the complete contract button, then click straight back on “search for new contract” all within a few seconds. your Sales Exec will then be spending most of the time looking for contracts rather than sitting around idle waiting for you to finish the current one.

You can see in these two images, i have all the parts on hand to complete the contract, and the 2nd image shows that even though i asked for $300 in the first image and it was accepted, its still quite low compared to my competitors so i should probably try $320 on high demand urgency next time. 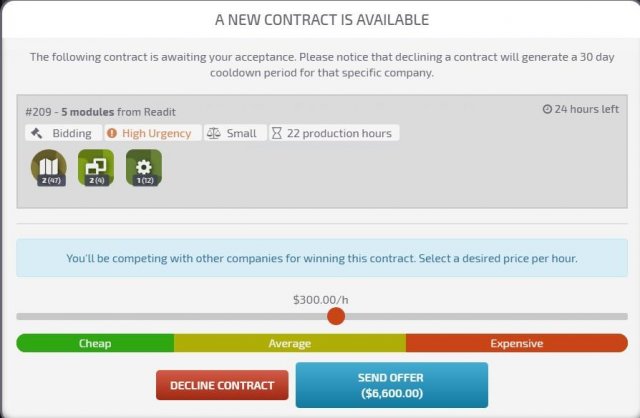 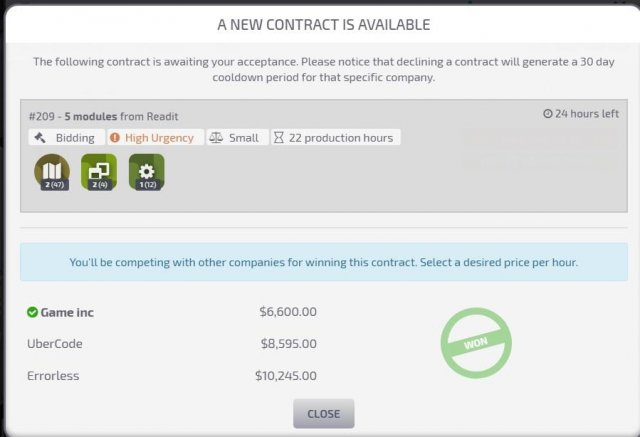 Some contracts are a set price, these i consider money for jam, but always check you have enough parts available before you accept. theres no point accepting a contract only to find out your graphic designer is on holidays or that it requires multiple complex parts you dont have!

If its very late in the day DO NOT start a new contract unless you have every single part ready to go so you can instantly complete it.

Accepting a contract then having your workers go home for 14 hours only wastes valuable time, they’ll come in at 9am and be hard pressed to finish in time.

With the contracts you have to negotiate adjust the slider depending on if its low, medium or high urgency. as a starting guide i use $150 for low, $200 for medium, and $250 for high. this is not a hard and fast rule but a ball park figure. If you repeatedly get under cut by competitors on a low urgency contract maybe reduce it by 10 or 20 bucks next time.

Likewise, in my current game i find i’m several thousand dollars cheaper than my competitors on the high urgency contracts, so i’ve been able to bump it up to $320 and still get the contract with ease. Over time things will vary, so you will need to tweak it as required.

The manager is the only staff member i upgrade to Intermediate in the early stages.

The only time you’ll need the intermediate level parts from the Dev or designer is when your sales Exec is upgraded to intermediate, as this will bring in bigger contracts with more complex and numerous parts that only small staff levels will not keep up with demand. (8 staff max in the early stages) .

I dont do this too early as your beginner sales exec will not get contracts that make enough money to keep up with intermediate level staff wages, so i waited until i had the 2nd building that takes 20 staff.

You can make reasonable money for quite some time by leaving everyone else on beginner and instantly completing contracts with little or no wait i was able to pay off my loan and move to level 2 building but it will take a couple of hours.

Once i had enough cash to pay outright (no loan) ii moved to the 2nd building and employed more Dev’s (total of 4) with a 2nd researcher and 2nd DevOps to start firing up my website creation, and 2nd manager to manage them all.

Once the other staff were intermediate only then did i upgrade my Sales Exec to intermediate and get the more complex contracts.

I am fairly new to this game so others may disagree with this last point, but i play a fairly safe and conservative during early game to avoid loans at all costs.

Why give the bank your money in interest because you’re going broke and needed a loan to stay afloat?