I played at least decent amount of time with every weapon with no favorites. And I want to say EVERY BH’s ranged weapon is viable and usable. You just execute them a little bit different from weapon to weapon. For example: most likely you cannot one-shot Chaos Warrior with pistols (pistols does not penetrate armor) but pistols has mentionable sustain potential or you want to hold trash mobs in line in front you while holding volley crossbow in your hands, with repeater pistol you want them to come a little closer.

Melees pros & cons are more obvious than side-arm’s.
First of all, want to point out cold weapons I don’t like:

Important note I want to mention: Axe, Flail and Falchion has an equal usability. I can’t say one of them is super better or super worse. Every one of them excels in different situations.

How do you choose:

These 3 above are really good well rounded weapons in this game. Along the way I just switched between them when I received more powerful kind. 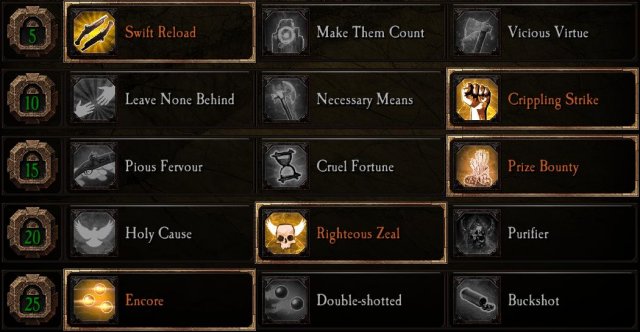 Use with Crossbow and Volley Crossbow. 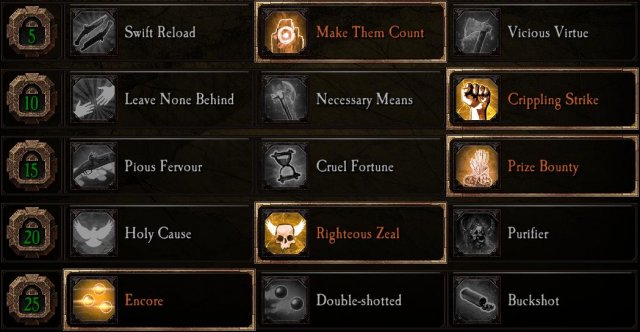 In case of Pistols: 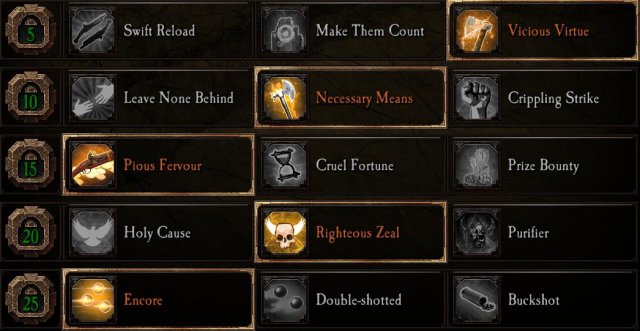 Note: pay attention to Leave None Behind Instead of Necessary Means

What Stats and Traits You Want to Prioritise

With level 25 talent we can spam ability every minute (normal ability CD is 90 secs). And with first mentioned trait you can decrees it even further. Since you already can one-shot Chaos Warrior. This trait let you use your ability whenever you in need for it freely. Like clear trash, one-shot any special (or several), more often Crowd Control bosses.

And two later traits just useful in any situation. If you do combo: attack -> block-push -> attack, or attack x2 -> block-push then those traits most likely to proc.

Stats you are looking for:

Block Stamina Cost ain’t bad either. But I less often block and more push, so just look what you need.

Honestly, smh BH has no traits that fit his kit and style. During progress I didn’t bother myself about traits on ranged weapon or about orange weapons generally. But we have some gems here.

Of all this list I would like to recommend use 3rd one (Scrounger) for your Volley Crossbow or Repeater Pistol. With this talent you literally can forget about ammo packs. You will restore 2 ammo for every enemy critical hit. So, you shoot alt-fire with these 2 guns with your Blessing Shots ready – you refill 2 ammo into your pocket per enemy hit.

Armored so you can deal even more dmg (just in case) with your alt-fire side-arms and in case you has Axe/Falchion.

Hand of Shallya in every situation. Natural Bond if solo with randoms and you have enough overconfidence in your skills. I won’t recommend take Natural Bond on higher levels of play.

Sometimes take a look for Damage Reduction vs AoE attacks.

Most interesting traits are here.

First of all, you have to pick Strength/Concentration potions. Former gives you damage, second – let you spam 2-3 ults (abilities) with 1 potion.

Shrapnel can be useful on higher difficulties (Legend).

Curse Resistance – you WANT this. I believe you want handle grims in this game for better loot. Even if you won’t then your teammates will do. In any case, this is the most important stat for trinket.

Stamina Recovery – not that bad if you feel yourself offended by many enemies. Or you just don’t want to reroll 33% Curse Resistance.

How to Progress and Play

Save Commendation chests until you are ready to step into Champion difficulty. Or even further than that. Logic here is: more you save untill the very end game – faster you progress to achieve 600 character power or better your perfomance on Champion/Legend.

At around level 25 or 300-400 character power you may think to open it. But it’s up to you. If you feel like you don’t get good items and stuck for too long at some difficulty/”suc way too much” – go on.

Forget about stats and traits before Champion difficulty. Equip the most powerful items. White, green, blue – doesn’t matter. You want to accumulate power ASAP. Power come by items and level. If you are passionate about this game then you want skip recruit and veteran difficulty. And you will do it really fast.

Don’t craft. Maybe only rare items you are unlucky with. But don’t upgrade for sure at all. Reroll stats if you have some dust to spare. Like 50 green or above. You will need many resources later for end game content.

If you want to walk through this game as If it’s an easy mode then find party and make a group. Groups transform this game into casual one. Honestly I would recommend play in group only of 2 people or go for Legendary difficulty if you are pack of 4.

Don’t shoot left and right after Champion difficulty. Don’t be like those elf/siennas plebs. You are better than them. You don’t waste ammo on trash. At least do it with passive skill reset in mind. And be aware of your mate’s position most of the time. Why: so you will not be able to friendly fire them smh and sometimes they even can save you.

When do I go higher difficulty?

If I remember correctly, I switched from Veteran to Champion at around 300 character power.

In normal cases, what you do is: Shoot alt-fire with your side-arms (a.k.a repeater pistol / volley crossbow) -> Cut with melee some trash mob or deny your prior target -> Shot another one or go on with bullet hell.

If you are too lazy even for this then just go with this in mind: be prepared to alt-fire Chaos Warrior/Mauler or another special enemy and cut with your melee everything else. Usually with enough power you deny Mauler with just 2-3 hits by your falchion/axe/flail. Blessing Shots gives you an opportunity to one-shot Chaos Warriors or at least leave them with 5% hp.

Next, unload your Locked and Loaded skill. If instead of Strength potion you have Concentration potion then drink it right away.

You want to shoot your ranged weapon with Blessing Shots ready before Locked and Loaded because it (ability) was nerfed and Bosses resistance to damage increased. Generally, you deal more dmg with your gun if you have Blessing Shots than with your ability.

Also keep in mind special enemies. Again, you can count on your teammates that they will kill them or react in time to rescue you. BUT, don’t count on that too much, you will be dissapointed.

Tip: if your teammate was caught by Spawn of Chaos you can CC (stun) boss with your skill. So this way you prevent it from healing. Same goes for Bile Troll when he sits.

Warhammer: Vermintide 2 – How to Stealth

Did you know you can stealth most of the levels? ContentsGuide to StealthWhat is “Stealthing”?Let’s Explain More in DetailNow Let’s Talk BuildsLet’s Talk About Player #4Special MentionFinal Words Guide to […]

Warhammer: Vermintide 2 – Tips and Tricks for Getting Started

Before you Play the Warhammer: Vermintide 2 game, you will definitely want to know these simple but useful tips and tricks. If you have any tips feel free to share […]

Warhammer: Vermintide 2 – All Tomes and Grimoires (The Skittergate)

See also: Righteous Stand / Athel Yenlui / Against The Grain. War Camp. All in One Video. The Skittergate Tome #1 – Zone: Merchant District, Helmgart Before you go down […]