This is a place to share tips on the best places to farm rare cards, whether it’s a card pack in the shop, or a level you can beat quickly for a guaranteed 5-star pack.

So far, the fastest map I’ve come across to get 5-star cards can be finished in about 30-35 seconds. In Paradise Episodes, go to Ayame’s Business and pick the final stage, on 3-star difficulty.

If you have maxed out rocket launchers, give them to your whole team. For yourself, I’ve found that picking either a rocket launcher or sniper rifle speeds things up quite a bit.

It’s 4-on-1 for this fight, so if you stick to the upper level and take a couple shots whenever Katsuragi’s shields are down, it’ll be over without taking any damage.

Then, just repeat until you’re sick of it.

As a side note, every once in a while, this happens. This was after a 22-second run. 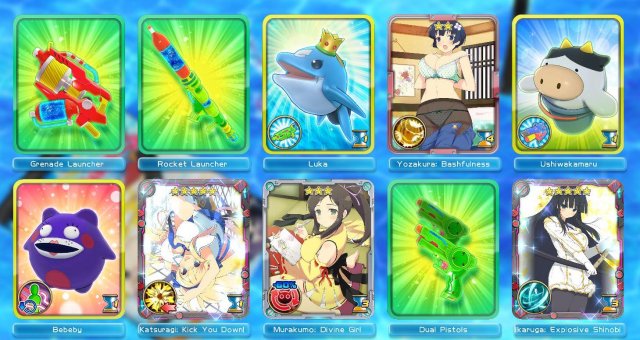 If spending money without fighting is more your style, then I have to wonder why you’re playing this in the first place. But if you really want to go this route, it seems like the Paradise Pack (the one with extra pet cards) has slightly better drop rates for rare cards.

The best result I got from a single purchase was 3 URs, but that’s only happened a couple times. Usually, if you buy the packs in sets of 10, you’ll get 2-3 URs and 4-5 SSRs. There’s always a chance that you’ll get nothing but Ns for all 10 though, and that happened to me only once. So it’s kind of a “big risk, big reward” type of thing going on with this pack.