The two songs “Destroy and Race and Groove” and “Don’t Bite My Butt!” are locked by default. However, you can fairly easily get them in both the Arcade and Story modes. 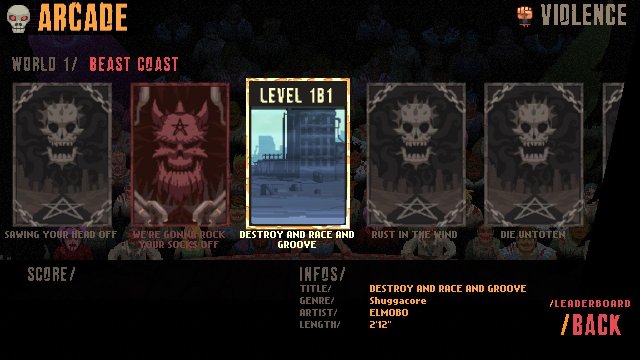 “Destroy and Race and Groove” is a Meshuggah style Djent song while “Don’t Bite My Butt!” is a Babymetal inspired song complete with Japanese lyrics.

Now, if you want to be super fancy, you can also get these two songs in the story mode.

To get the first one, return to Marlene’s garage after a while. I beat the campaign already when I did it, so I don’t know when is the earliest you can do it. When you return, it’ll say that the Sharks attacked the place and that Marlene is gone. If you keep going back, it’ll eventually say something about Marlene leaving a note or something. You’ll unlock “Destroy and Race and Groove”.

To get the second one, return to the casino place and click on the radio repeatedly. You may have to talk to Derick (the blonde drummer) until he says something about wondering what happens if you kick the radio 66 times. Then you’ll get a conversation about Snake (the keyboardist) finding a concert ad for Babymetal. You’ll unlock “Don’t Bite My Butt!”.