Smashing is a pretty important action in the game, but the mechanics might not be immediately obvious.

When you build up a combo of 25 or more, the player can spin up and drill into the planet, vaporizing everything in the vicinity. During this time, you lose control over the astronaut, but they’ll be invulnerable for the duration. 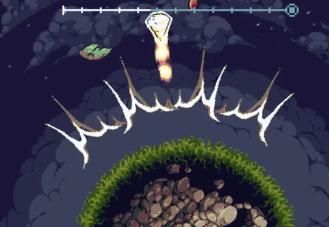 With a charge equipped, press the S or Down Arrow key on your keyboard to start the move. On a controller, you can press the B Button or the Down direction on the D-Pad.

You get some bonus points for the action, and it’ll increase your combo for each plant caught in the smash. You’ll also receive points for each kill as you normally would. There are three “waves” of damage, and you can strategize your placement to maximize your score:

Knowing When You Can Smash

The game gives a bunch of cues to tell you you’re ready to activate its most powerful move.

The most obvious and most important is a flashing, animated down arrow near the top right corner of the screen:

Additionally, the astronaut will get a similar little arrow over their head:

There’s also a few more subtle cues; combo particles will start saying encouraging words like “Great!” instead of displaying numbers, and your score multiplier will highlight with a white outline.

When you get to a combo of 25, the first smash is added to your arsenal, but you can keep stocking up more by extending your combo to additional multiples of 25. The HUD arrow will start flashing quicker and change as you accumulate more, and you’ll hear another powerup sound for each new smash you earn.

Smashing is a reward for playing well; you can use it in pretty much any way you want. Because of its specific side effects, its uses usually fall into one of three categories.

Exiting the smash into a huge group of enemies will raise your combo considerably and give you the best score for your buck. It’s especially useful early on, where lots of fairly predictable enemies are present that you can shepherd into corners with some patience.

Smashing makes you totally invincible and deposits you high into the atmosphere. If you’re about to run into an enemy that’ll damage you, activating the smash can save your combo and prevent you from taking damage. Later in the game, touching the ground can be just as dangerous as hitting an enemy, as it’ll take away all of the shields and abilities tied to your combo. If you’re about to hit the ground on accident, using a smash will raise the astronaut high into the air and give you another shot at finding a much safer plant head to stomp on.

Stockpiling smashes can give you a boost later in the game to defeat bosses or keep up your combo in the looping hard mode, but there’s an element of risk to saving them. If you take any damage or lose your combo, all of the smashes you’ve earned will disappear and you’ll hear a power down sound.

Using a smash closer to the ground will award some more bonus points, but you’re more likely to hit the ground by accident instead.