In my guide i will be talking about the mission “Into The Nest” as well as the boss fight with Spinemangler. I hope to educate the people on tips and tricks i believe are important for dealing with this level and its annoying boss.

In this guide I will be doing my best to explain what i believe is a good strategy to complete the mission “Into The Nest”. I am totally open to suggestion or any faults in my guide as you the reader may find while going over this guide. I hope this will be informative to you and possibly help you in completing the mission “Into The Nest”. Now in this guide i will not be specifically talking about every character and class as i have not played every character and class. What i wanna share is general to the map of “Into The Nest” and focusing mainly on the boss fight with SPINEMANGLR!

I wish to start with talking about the map itself in regards of supplies particularly ammo for the range dps focused classes (ie bounty hunter / huntsman / waystalker). Going through the first half of the map i find that ammo can be found sparingly but still available so you are not walking around on an empty pouch/quiver. 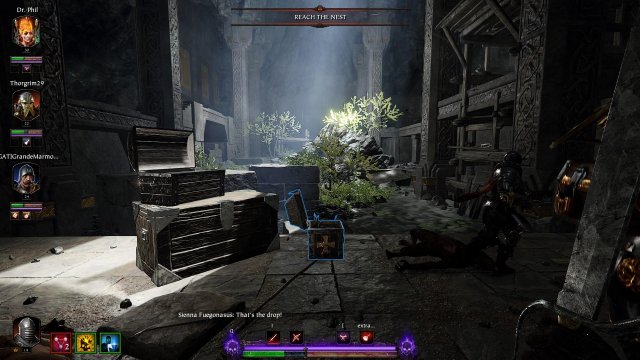 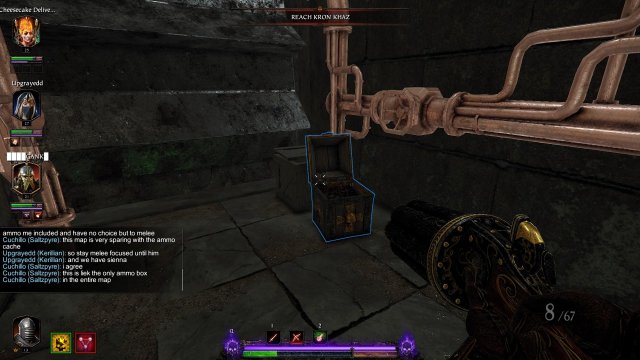 These are the only 2 ammo caches i find on this map, the second image being the first cache you find 100% of the time when you run this mission. The first image is the last cache you will find and it is located in the entrance of the area where the third tome is located. This ammo cache i find is 50/50 on spawn rates and you will not be lucky to get it every round.

I find in my experience from running this map multiple times that the second half of the map will contain either no or very little ammo caches. Knowing this i wish to address that if you are a character of the three i mentioned above I would recommend if you do not have an ammo replensher skill/property that you hold off from firing recklessly at every special that comes your way. Often if you do not conserve your ammo, you find yourself walking into Spinemanglers layer running on empty or close to empty on your range weapon which for certain class can be very detrimental to your dps.

So when you arrive to the end of this mission you reach a small arena like area where you will prepare to face the leader of clan Fester Skarrik Spinemanglr. While i would not go as far to say he is the hardest boss in this game i would say he can be one of the trickier/ harder to deal with boss if not approached correctly. 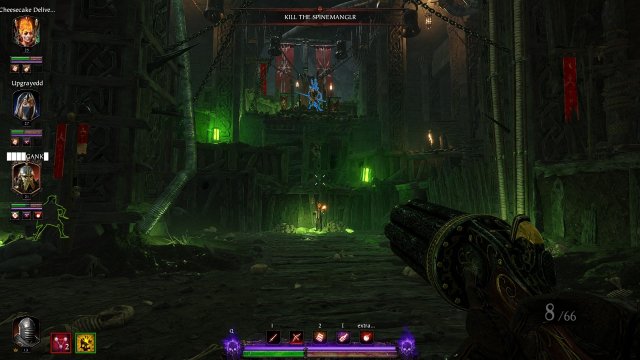 Spinemanglr is a essentially an armored stormvermin that fights like a berserker, he either fights with his polearm or dual wield swords. He usually attacks very fast and leaps to his desired target with relentless combos. I find especially when he pulls out his dual wield swords, that if you are the one with aggro your efforts would be better spent dodging and blocking then trading with him. He does to much damage in the melee and it would not be worth trading your hp for the little the damage you inflict on him. Instead i would recommend preserving yourself and allowing your teammates to deal the damage while you kite him. 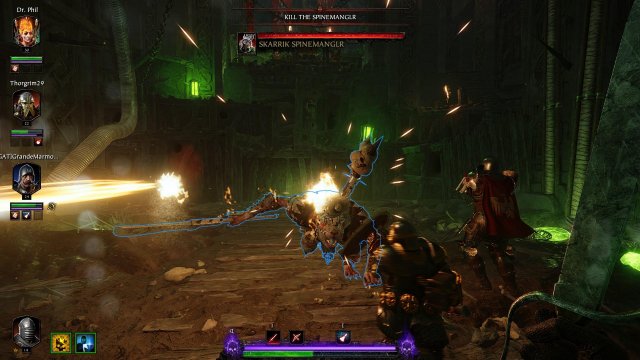 Spinemanglr also has a wind up attack with his pole arm that is extremely noticeable, this attack is unblockable and has an enormous radius where you can be hit. Allowing him to strike you with this attack even while blocking will break all your stamina and still inflict damage to your hp bar. The trick is simple you see him wind up back out and stay away, for the heavier classes (Kruber / Bardin) running straight back without blocking will get you out of the radius quicker. 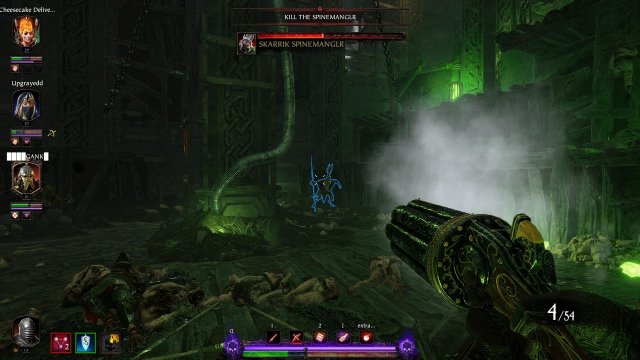 When Spinemanglr has been damaged to certain points in the fight he will begin to spawn slave rats and stormvermin. He will jump into one of the corners of the rooms and take up a certain stance that will cause these rats to spawn. My advice here is to group with your teammates and make sure all of the additions to the boss fight are eliminated first, trying to fight Spinemanglr with his minions especially the stormvermins will make your day a lot harder. While the adds are spawning if you attempt to attack Spinemanglr with melee he will usually swing his polearm in that wind up attack i mentioned. After this he will break out of this phase and repeat his onslaught with either his dual wield or his polearm and will rinse and repeat until he is beaten.

I feel that if you follow these steps and work together with your team you will have 0 problems beating him with 2 grims. You should always communicate with your team and watch each others backs as well as prioritize picking a downed ally up as 4 swords do more damage then 3. Thank you for giving your time to reading this guide and i hope you nothing but conquest on your future missions!.

Special Note: Something I have recently found out is currently in patch 1.0.5.1 Skarrik is actually bugged and can be taken advantage of until patched. In his phase of spawning stormvermin and slave rats after you slay his adds, you can just keep your distance from skarrik and attack him with ranged attacks and he will just sit in the corner. Once you go up to him and melee him he will break out of this phase and continue with his melee attacks.

How to find secret stash and complete the challenge. Other W:V2 Guides: Scrivener Challenge Guide (Back to Ubersreik DLC). Last Respects / Zingler’s Bones and Where to Bury Them. Horn […]

If Convo is getting you down, here’s a strategy that makes it easier. ContentsHow to Easy Convocation of DecayThe End Event Is BuggedThe Good SpotWhy’s It Good?One Last Thing How […]