Just started out with Star Trek Adversaries and a little overwhelmed? Here’s a guide for complete beginners (never played a CCG (Card Collecting Game) in their life and those who have, but still want an overview on what’s new). I will cover all sorts of cards, play styles, deck building, and maybe some other stuff. 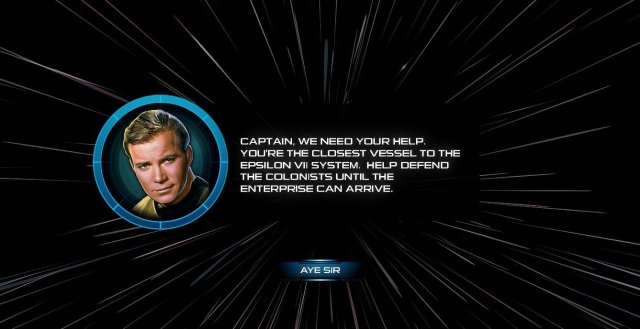 Welcome to Star Trek Adversaries! To help out new players, there is a tutorial. At this time, it cannot be opted out of and must be played every time a new account is used.

I know they give you a lot of info off the bat, but be sure to read it! Here’s a quick refresher, if you want: 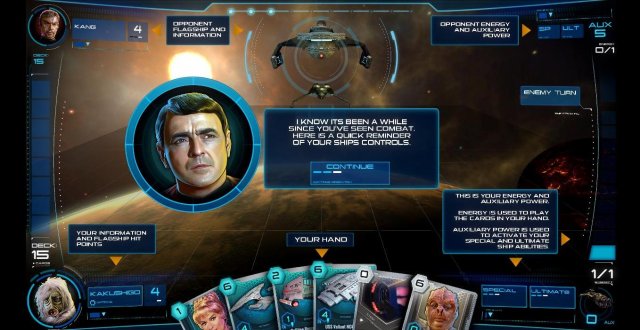 Just follow the instructions from here. Cards that need to be played will be highlighted. This is a mock match, so don’t worry about losing because you can’t.

When you summon the Enterprise, don’t worry about attacking the ship your opponent has in play, just attack them ‘to the face’ (the other flagship).

This tutorial is supposed to be a brief overview of most of the major parts of the CCG, including the one mechanic unique to Adversaries: Retreat. I’ll go more in depth on that later.

Now you’ve completed the tutorial and can see the primary page for Adversaries. From here, you can go just about anywhere.

We’ll start with the rewards you get for completing the tutorial the first time: 315 Command Points(CP) & 1500 Latinum(Lat). Yes, you do start out with a bit of premium currency, isn’t that nice? You also get replicator patterns, but I’ll go into that under Deck Building.

With this currency you can either buy flagships or packs. I recommend packs- right now the only cards you have are basic and let us be honest, they aren’t that good. If there’s a ship you really, really want though, pick it up with CP. All Klingon flagships will be purchasable with your starting CP, though there are a few Federation ones that require a bit more.

Why start out with packs then? Because without buying any flagships, there are six unlocked immediately.

Now I know the next question: Which one is best? My personal preference runs Klingon, but I’ll be honest: They all have their strengths and weaknesses. Make a choice based on how you want to play. And if you aren’t sure what Haste or Modulating Shields is, check the next section down. 😉

Once you’ve chosen your ship though, it’s time to deck build! (When/if you buy cards, there are three options for packs: Standard Packs, Klingon Packs, and Federation Packs. If you plan on playing mostly Klingon or mostly Federation, grab the themed packs. Otherwise, Standard will do. Themes packs ensure you won’t get any cards for the other faction.)

To deck build: select your ship and hit the deck button!

You’re allowed to have 30 cards in your deck. Each Flagship also comes with 8 unique core cards that can only be drawn when the SPC/ULT is activated. The SPC gives you a choice of three cards and you can pick one. The ULT will give you three cards. Legendaries (Gold rims) can only be drawn once per game.

Without buying any cards, all you have are 1* (commons). Using just starting Lat, you can buy 10 packs. That’s 50 cards, at least 10 which are guaranteed to be at least 3* (rare). You’re probably going to get more then that, maybe even some Epics (4*) or if you’re really lucky, a Legendary or two (5*). Even better? A 1/5* Legendary functions the same as a 5/5* Legendary and currently the shop is coded so you can’t get duplicate Legendaries until you have them all.

In the bottom left hand side of the deck builder, there is a graph. It is numbered 0 to 7+, as you add cards to a deck, it shows you the ‘curve’ of the deck. Here, you want a bell curve in most cases. You should have more 3, 4, and 5 energy ships then anything else.

While you can theoretically have a deck of all crew, I would limit yourself to six or seven. Crew are great- but you need a ship to play them on. I also recommend crew that return to your hand upon core breach (both the Federation & Klingons have at least one).

As a new player, you’re automatically given two replicator patterns: 1 3* and one 4*- these can be used to replicate any 3 or 4*- so find ones that makes synergy with your deck. You can also pull replicator patterns from card packs (nothing quite like getting a legendary replicator). To use them, go into the Replicator under Deck option and right click a card (it can be one you have or don’t have, but I recommend ones you don’t have yet.

My personal preference is to pick my crew and build around them. If you happened to have pulled a Legendary, you might want to think about building around them. Don’t be afraid to rebuild. No one builds a perfect deck their first try, don’t worry if it’s not that good. Look at what you have. Run retreat if you have a lot, run core breach if you have a lot. Don’t be afraid to ask for help in the Discord either, everyone is pretty willing to help out. I cannot be any more specific then this because there is no one way to a build a deck. I recommend synergy with your core cards & Flagship but that is about it.

Using only the beginning Latinum, I purchased 10 Klingon packs to give a rough idea what a new deck would look like. I got extremely lucky and pulled two Legendaries: Quark & Gowron.

Like I said, I have a strong preference for Klingons so I build a deck for the Raptor Class. (To be quite honest though, I’d probably buy the D5 Battlecruiser or Bird of Prey ENT. But Raptor is a stable beginner ship, so here we go!)

Because I got two Legendaries, I automatically added them to my deck. Most Legendaries should be run, once you have more then six you can start getting picky about which ones. Since they’re both crew, I went on add four more crew.

This deck is primarily a core breach deck, with a couple Guardians (my personal preference) thrown in. This plays off the Raptor’s Ult which doubles the effect of a core breach (and the core cards certainly don’t hurt). If you want, this can be copy & pasted directly into the import function of the deck builder. It will put whatever cards you have into a deck and leave out the ones you don’t. It’s a relatively decent deck, but I wouldn’t want to run into the top 10 with it.

Annnnd: How it looks In Game! 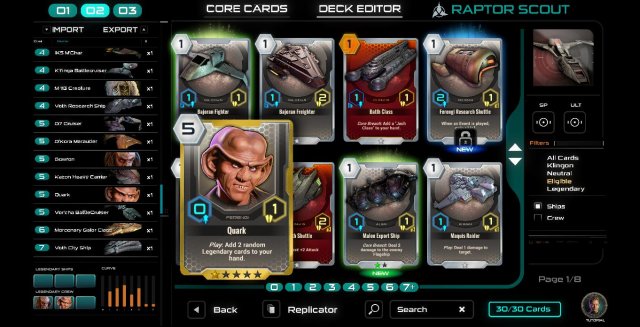 So every Flagship has a unique ability, that’s great! But how do you use them? A special costs 20 Auxiliary Energy (AUX) and the Ultimate costs 40. You get 5 AUX per turn passed, but if you also have unspent energy, it’s converted into AUX at a rate of 1:1. Any damage your Flagship takes (including self-inflicted) give you AUX equal to the damage taken. You can use this to your advantage.

I’ve broken down Flagships into three categories: Summons, Direct Damage, and Effects- some fit into multiple categories, but I go by Ultimate.

As the name implies, these Flagships summon other ships to your side of the field.

Either damage ships on your opponent’s field or the opponent’s Flagship itself.

These give an effect to either your ships (positive) or to the enemy’s ship (negative). This includes retreating, among other things.

As of right now, Quark’s is only PvE (player versus engine/AI) but there are plans to make it PvP.

It’s also draft, which means none of the cards or flagship you own are used. First, you pick a flagship out of a choice of three. Then you draw ‘random’ selections of 3 cards (I say random, but they’ll either be neutral or the same alignment as the Flagship you chose), you chose 1 card from each set. Your first, eleventh, and twenty-first draw will be all legendaries, so you will have at least 3 legendaries in your deck no matter what.

Be careful with how many crew you take, especially if there’s an option for a ship instead. it is harder to get a good crew & ship ratio but when you do, it works great.

You might notice these AIs look familiar if you play with the AIs available on the left hand side of the Multiplayer screen. Your first opponent will be easy and if you win it becomes medium and then hard until Borg.

Should you lose a game, you go down to the tier below. After 3 loses, you cannot play in that draft anymore.

Remember: The AI are a little dumb (as of build 4.9). They don’t really retreat, their attacks sometimes don’t make sense, and they’ll use their SPC/ULT as soon as it is available. In some cases, it’s beneficial to push the AI over to their ULT (Borg Queen, looking at you) rather then their special.

The meat of the game is in PvP (Player versus player). This can be found if one hits the “Ready” button and selects their deck.

Every new player starts out at 1000 ELO. You win and lose ELO as you win and lose games. If you’re familiar with the Chess ELO algorithm, that same one is used by Star Trek: Adversaries (if you aren’t familiar with it, don’t worry, it’s not that important. The higher you go on the board, the easier it is to lose ELO).

Right now, the matchmaker will give you anyone else in queue- which means it’s possible for a brand new player to match up with the top 10. It’s unfortunate and you can either stick it out and maybe learn something or simply concede. There’s also quite a few people who stream games, so don’t be afraid to watch a couple.

Mulligan or Not to Mulligan?

My rule of thumb for Mulligans is usually to get rid of any crew cards. You can’t play them turn one anyways. Then anything over 3 cost. You want to use your starting hand fast. If every card is four or over, you might want to keep the lowest cost rules. As you play the game more, you might find how you mulligan is different (if you run cost reduction decks, you might want high cost cards, etc), but this is just for starters.

Basic introduction to the keyword text used on various cards within the game, these words appear on Ships, Crew and events. Non-conditional Effects These will happen without any other conditions […]