A build for clutching and soloing Legend.

The purpose of the Handmaiden for this guide will be team insurance, speedrunning, and soloing.

This guide will be focused more on Quickplay, where things go badly more often.

You are going to be the team’s insurance, if everyone dies. By speedrunning, you will reach your respawned allies and give everyone a second chance. We will focus on weapons that allow you to solo just about anything.

If you wish to play differently, then this guide is not for you.

Speedrunning is something the Handmaiden does very well, due to a teleport and temporary invisibility. You should know how to speedrun maps if you are playing Handmaiden, because you can apply these skills to your normal play, as well. If everyone dies, guess what you get to do.

The basics of speedrunning is to progress through the map as quickly as possible, which usually involves very little killing, since that takes up time. You will utilize dodging, fast movement speed, blocking, attacking to gain speed boosts, and your dash ability in order to get by anything that stands in your way.

An easy map to practice on is ‘Against the Grain’. It’s very open, the map never demands you to sit with an objective, so you are always on the move, and there is always a boss, so you can get used to having a pet boss following you around.

This is not a speedrunning guide to Handmaiden, but we will understand how to do it, in order to help our team if the worst happens. We will be assuming you intend to get your teammates back up.

Let’s get to the tips now.

1. Daggers or Spear. Take your pick.

2. Use your ears. Listen to the enemies behind you, because they give you clues on what they are doing. This lets you know if you should attack to gain speed or block while running away.

3. Take and hoard a blue or purple potion, just in case you need it. Alternatively, take a grim, since you will try your best not to die, and as a speedrunner, you are harder to kill.

4. Take a bomb, when you get the chance. You’re going to want it, if you intend to get your teammates up.

5. You will have a lot of enemies following you, so you need a way to kill them, once you reach your teammates.

You probably want something with fast movement. Spear and daggers allow you to move faster than normal. However, you can get by with something else if you wish.

If you are a master of the glaive, then you should probably use the glaive, despite it being slower. Use whatever you know you will succeed with.

+No slowdown while shooting
+Large AoE on charge attack
+Stuns on every charge hit
+Fast attacks for special and boss killing.
+Poison stacks, more arrows will make the boss’ healthbar drop faster.
+2-4 shots for specials (might differ depending on power bonuses)

When you’re running away from a huge horde that killed your team, they are all going to be clustered together. This is where the Hagsbane shines, since its charged shot will stun and hit everything in a large area. You also move quickly with the bow, meaning you can kite easily. It’s also good damage against a boss, so if a boss is following you, you can find an ammo box and kill it. It’s a good all-rounder, favors speedrunning, but it has low ammo.

You’re not going to be the dedicated special killer as a handmaiden. Shoot specials only as you need to. You have a limited ammo supply.

During overwhelming hordes, use your charged shot to kill/stun enemies. This helps your teammates more than you think. Friendly Fire is minimal, especially if they are floating on temp heatlh.

If you are the last man standing, you will speedrun to your recently respawned teammates, but then you have a problem. You have a hundred enemies following you and they will just kill your team again. So, what do you do?

Pull out the hagsbane and start shooting charged shots into the swarm, while backpedaling. They shouldn’t reach you very quickly, because they get stunned on each hit. As they slowly surround you, dash through to safety and start the process again. Eventually, everything will be dead.

If you have chaos warriors following you, they will be the last thing standing, so you will have to take your time killing them, or kiting them away and getting your friends up to kill them together.

If a boss is following you, you want to keep an eye out for an ammo crate, because that is the signal that it’s time to kill the boss. A full volley of hagsbane will take off about 20% of the boss’ hp (I use 20% power vs monsters). So, 4-5 refills should do it.

If you have 2 bosses + chaos patrol + stormies + normal horde behind you, then you might want to see if you can just finish the level by yourself. Be aware that some levels are near impossible to finish on your own.

Health and stamina are fine.

Pick whatever trait you are comfortable with. I personally like Natural Bond, since I gain health while on the run. Stopping during a speedrun can be dangerous.

Power vs Monsters, personally. I heard this works against packmasters, too. They die in 2 shots, so maybe it does.

Cooldown Reduction and Movement Speed. Even though your dash comes back fast, sometimes it’s not fast enough, so 10% can be the difference between success and failure. Especially true when dodging bosses or gutter runners.

Bomb Dupe, I guess. It’s nice to have another bomb, if I ever need to throw one. 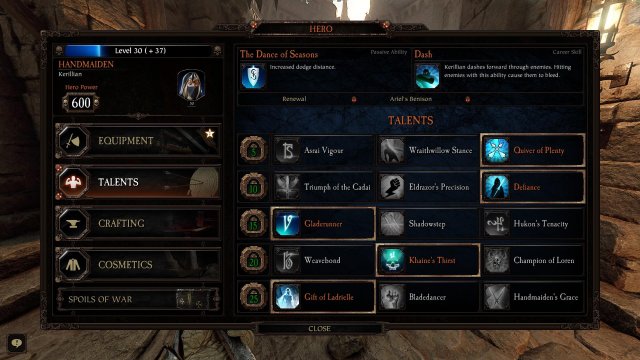 If you’re following this guide closely, use this.

We’ve been talking about this a bit already, but this is the official section for it.

You’re going to be behind the front line. Play carefully, block a lot, and try your best not to go down first. Assist the back-line special killer, since they’d appreciate that. If you see the team is lost, abandon ship and turn on speedrun mode. Yeah, it’s kind of selfish, but it’s better than wiping.

Don’t use all your ammo on specials. Only shoot a special if you absolutely have to. Instead, use your hagsbane as crowd control on overwhelming hordes/patrols. It is quite good at stunning, and the friendly fire is minimal. It will help your teammates more than meleeing.

It’s insurance time. If your team dies, hopefully you have been playing carefully and have a good health pool. You will speedrun your way through the level until you reach your respawned teammates. At this point, a horde is probably following you, so you will shoot them repeatedly with charged hagsbane arrows while backpedaling.

If they reach you, you will casually dash away and continue the process again. When you have killed enough enemies and it is safe, get your team up and continue anew.

If you have become comfortable with this procedure, then you should start taking a grim and tome, since they are safe with you.

Warhammer: Vermintide 2 – All Tomes and Grimoires (Righteous Stand / Athel Yenlui / Against The Grain)

Warhammer: Vermintide 2 – All Tomes and Grimoires (The Skittergate)

See also: Righteous Stand / Athel Yenlui / Against The Grain. War Camp. All in One Video. The Skittergate Tome #1 – Zone: Merchant District, Helmgart Before you go down […]

Warhammer: Vermintide 2 – How to Temp Health on Ranged Classes (1.3)

1.3 getting you down? Let me fix that for you. How to Get Lots of Temp Health This is some help for those who are struggling with no THP gain […]