Did you think infinitely tiling nuclear reactors in 2×2’s couldn’t give you enough power? Here’s more ways to infinitely tile your OP power plants that both look more interesting and provide better efficiency!

The nuclear reactor has an incredible power output by itself. however, every reactor can be buffed to create even more power when placed next to other reactors, which tiling your nuclear reactor setup is a great way to harness large amounts of power in a small amount of space.

In this guide I will show how the power output works and what configurations I use in order to maximize my own power output using nuclear reactors.

As of this writing, power output for a single nuclear reactor is 40MW, which equates to approximately 4 heat exchanges and 7 turbines at full output.

When two powered reactors are side-by-side, that same single nuclear reactor is now 80MW, or 8 exchangesand 14 turbines respectively. Then add the output of the other reactor and the power increased exponentially with a total of 160MW compared to the original 40MW. This is because of the neighbor bonus. This neighbor bonus, in essence, adds the power of each neighbor to itself. Because the reactor has 4 sides, a single reactor can have at most 200MW power output, or 5x its 40MW output, but the greatest flaw with this is that fuel must be inserted manually since there is no space around the reactor.

Therefore, the greatest output a reactor could have is with 3 neighbors and an open side for automated refueling.

Let’s do some math(s)

Here I made several little diagrams where each square represents one reactor, and in each square is the bonus that reactor receives. The goal is to get the highest number/bonus with the same number of reactors. Here a 2×2 reactor config gets the output of 4 from the reactors PLUS an extra 8 output because of the neighbor bonuses, resulting in an equivalence of 12 reactors, using only 4 reactors! 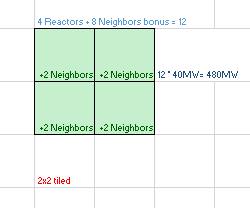 Like I said before, perfect squares would provide the most reactors with +4 neighbor bonuses. a 3×3 provides a +4 bonus, allowing for a total equivalence of 33 reactors with only 9 reactors, and a 4×4 could theoretically be the largest servicable reactor (not shown), which has 4 ‘+4’ bonuses, totalling an equivalence of an incredible 64 reactors using only 16 reactors, which could produce a mind-boggling 40*64=2560MW, or 2.56GW! 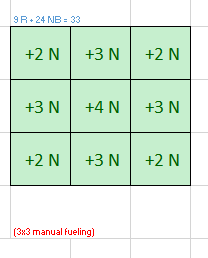 Unfortunately perfect square setups larger than 2×2 leave the internal reactors without places for inserters, so there is no possibility for automation, and this is where tiling becomes important.

This is the most common setup I notice on the maps I visit, and it is for good reason. It is easy to build and hook up to either a physical or logistic network.

It is based on the simple 2×2 reactor configuration, which always gives every new set of reactors a neighbor bonus. 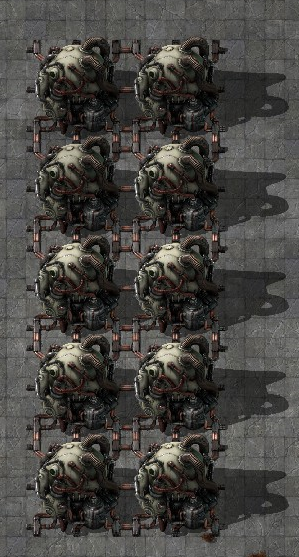 Disclaimer, these alternative configurations are by no means practical nor based on sound math. These were inspired by an aesthetic desire to work beyond the obvious 2×2 reactor tile configuration. These DO NOT output more energy per reactor, and the cost in space, time, braincells, and materials make these methods questionable, although they appear far more interesting, especially when tiled over each other. 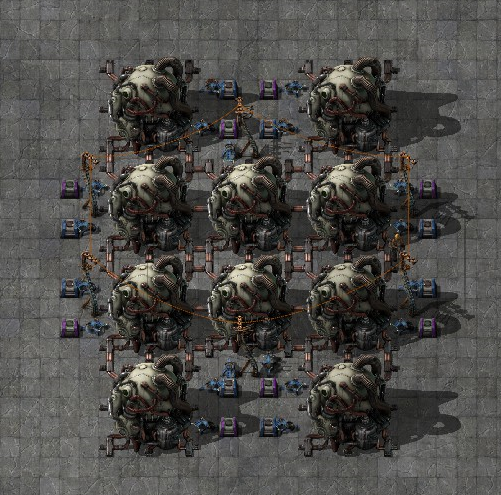 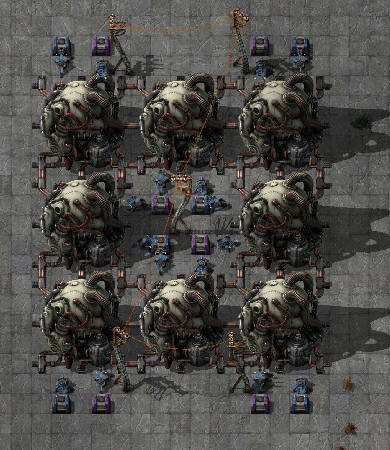 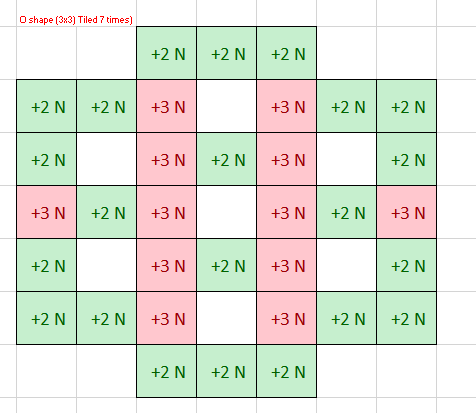 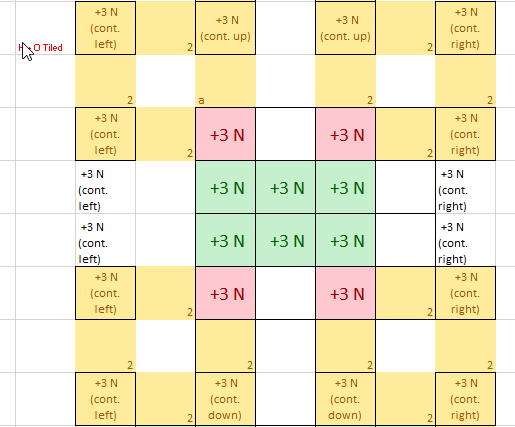 Unlike boilers, reactors must take time to warm up to operating temperature, and constantly use their fuel cells until they are spent. More critically, reactors do not throttle themselves when their potential energy is left unused, which leads to the question- can your fuel be conserved?

If you are familiar with using circuits in factorio, you notice that it is impossible to attach wires on any reactor, turbine, or heat exchange, so it is impossible to check a turbine’s output nor turn the reactor off at will. So, can your fuel still be conserved?

In short, i have found a way.
You can use a simple timer, a storage tank, and the reactor’s inserter.

After the fuel in a reactor is spent, the reactor’s temperature slowly falls to just above operating temperature, all while still generating usable energy. The only time the reactor does not generate energy is when it reaches its resting point, and how quickly it reaches this point depends on how quickly its energy is being converted to steam via the heat exchanges. The steam is the answer to how to control your reactor’s output.

Placing storage tanks alongside your heat exchanges is not only a great way to capture unused energy for later, they are also measurable for the circuit network. Because steam is the converted energy directly from the reactor, you can use it exactly like an accumulator battery, measuring approximately how much power you have left until it needs to be recharged again. Also, because storing the steam acts like gigantic batteries, you could potentially use a reactor/solar power network without batteries if you wish.

Unfortunately, this is not an easy solution if you do not understand combinators, but this might get you on your way.

If you’re concerned about the large value the timer uses, this is because the reactor is /very/ latent and takes time to regerate the steam lost after the tank falls below its threshold.

This process is not precise, and it does not save ALL of your precious fuel cells, but it helps, especially if you produce far more energy than you can consume.

Before I mention the turbines I must emphasize that using storage tanks is a very smart way to capture energy that could have been lost.

Turbines generate about 5.8MW each, which means that unlike a boiler/engine’s very pretty 1:2 ratio, a heat exchange has a strange 4:7 ratio for energy conversion, which means 7 turbines are required for every 4 exchanges.

However, if your factory experiences power fluctuations from using train lines or simply because of the day/night cycle, I recommend using 8 turbines with plenty of storage tanks for steam. Like I said in bonus 1, steam storage tanks act exactly like accumulator batteries, storing potential energy for use later.

Later in the game (but as soon as possible), you should research the Kovarex process in order to stop babying fuel cells and worry about other, more fun things like nuclear warheads. The kovarex process demands a lot of U-235 to start, and it is a time-consuming process.

The process is surprisingly simple with as few as 2 centrifuges, but surely it is scalable. Others have documented in guides fully automated ways to utilize the Kovarex process.

Want to mine at stupid speeds? Hate nights? Hate biters? Spawn in stuff? All possible using console commands! Read this guide to learn how to use the Factorio console commands […]

Factorio – How to Get Real God Mode (Cheat Code)

This is a complicated command that when executed in the chat, it will infinitely supply you with whatever you were requested in your logistic requester slots. You may want to […]

These are some tips for beating the 3rd and 4th levels of the New Hope campaign in Factorio on Hard setting. Other Factorio Guides: Beginner’s Train Guide. Speakers Guide (Low […]