Thanks to the help of this guide you will be clear about all the basics of Combat in Pillars of Eternity 2: Deadfire.

This guide main focus in Combat. It will cover all the specifics of Combat in Pillars of Eternity 2: Deadfire such as the Accuracy, the 4 types of Defense, the difference between Full vs Primary Attacks, Armor and Armor penetration, Areas of effect and safe-zones, Recovery time, Inspirations and Afflictions, Engagement, the Flanked status and more.

Let’s start the guide by talking Accuracy as it impacts almost every other aspects of Combat.
Accuracy is a number which directly impacts your chances to hit a target or not and if the hit connects to determine whether it is a graze, a hit or a crit.

The maths behind it may seem difficult at first but it is in fact very simple.
Your Accuracy score is compared to the target’s appropriate Defense type and the substraction of the two will be added to your dice roll to determine whether your attack connects or not.
For example if you have an Accuracy of 50 with your weapon attack and the enemy has 30 in Deflection you will get a bonus of 20 (= 50 – 30) to your dice roll. The dice can roll from 1 to 100 and the final total of your roll + the bonus or penalty you got from the difference between Accuracy and Defense determines the type of hit you do.

It’s worth nothing that in this game compared to the previous one Grazes are treated a bit differently and some abilities can have special interactions with it such as being able to interrupt even when doing a Graze for example. Be sure to check your abilities and conditions of applications of effect.

Let’s take a a real example of an attack extracted from a combat log.

This example first shows the Hit calculation as follows:

In this example my chances of missing the targets are of 4% and a crit would occur in 21% of cases. This is because dice rolls can only be between 1 and 100 and then I have +20 to any rolls made making the minimum result 21 and the maximum 120.

This shows that Accuracy is very powerful and any point invested in it improves not only your chances to hit and crit but at the same time makes you closer to avoid entirely to miss your target.

One important factor to keep in mind is that for abilities with multiple effects such as a damage output + an affliction effect the rolls are done seperately (and the Defenses can be entirely different). So your Damage can be a crit while the effect can miss entirely, be a graze or anything else.

Each action performed on an enemy target is calculated as we saw above by rolling a dice from 1 to 100 and adding up to substraction of your Accuracy vs the Defense of the enemy. Which Defense type is used is based on what action you perform and globally works as follow:

Though it may be overwhelming at first to juggle with 4 Defense types it is very good to identify which Defense your different characters target and what is your Accuracy vs the targeted Defense so you can have a good idea of how effective your actions will be.

In case of Area of Effect actions all targets have a seperate roll which determines the outcome.

Beneficial effects for allies don’t work with Accuracy and Defense and simply are always applied the same way.

Attacks based on weapons can be of two types: Full Attack or Primary Attack.
Behind those fancy names lies a very simple idea. In the event where your character is wielding a weapon in each hands and you use an ability where both weapons qualify to use it (such as two melee weapons for a melee only attack) the outcome of those two types of Attacks will change.

This gives dual wielding two weapons a significant advantage over having only one weapon (no matter if it’s one-hand or two-hand style) when using Full Attacks but as this guide shows it’s not the only thing getting into consideration for the damage output. 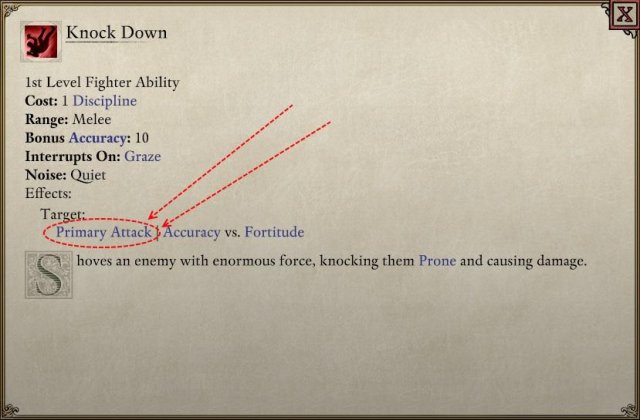 Example of a Primary Attack ability: Knock Down. 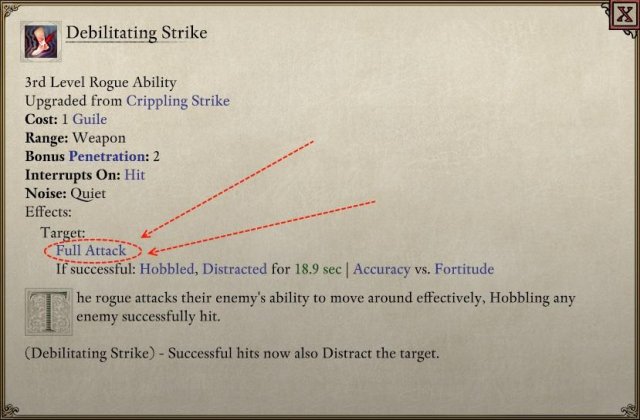 Damage Calculations and the Effects of Armor

Attacks and Abilities can be of several types:

All of these types except for Raw affect the matching Armor Type value. Raw damages are always doing the exact number they are supposed to do without suffering any penalty from armors.

So how does the Armor intervene then?

Armor acts like a modifier similarly to how Accuracy determines the outcome of an action. Your Penetration score is substracted by the matching Armor type of your target to determine the modifier applied following these rules:

A quick note about how Armors are displayed in the game.

Here is an example of my Shadowdancer current Armor Ratings’. This shows that my character has an Armor Rating of 8 in all Armor types except Crush, Burn and Freeze being respectively 6, 12 and 10. This does NOT mean that your Crush Armor is of 8 + 6 for example, it simply is 6 which means this character is weaker against Crush Attacks and especially resilient to Burn Attacks.

Let’s take a few simple examples to make things clear for the people in the crowd confused by this system.

Let’s say you are fighting a very angry bear with a general Armor of 5 with a Crush Armor of only 3. Our first character Bob attacks the bear with a Slash Attack with a Penetration of 6. Our Penetration is above the Armor type so we don’t suffer any damage penatly. But we don’t gain any bonus either as our Penetration isn’t at least twice as big as the Bear’s armor.

Now Bob decides to use his Mace to deal Crush damage instead of Slash damage with the same Penetration of 6. This time his Penetration is twice as big as the Bear’s Crush Armor meaning that Bob gets a +30% damage boost to his attack.

And if Bob’s teammate, Ted the magician, uses his sword to deal Slash damage with a Penetration of 3 for example the damage will be reduced by 50% because his Penetration is 2 points lower than the Slash armor of the bear and each point lower gives a -25% damage modifier (remember that this modifier never goes below -75%).

Always keep in mind that many other modifiers can apply to determine the outcome of an Attack or Ability. Below is an example of many modifiers being applied to a damage roll. So you can heavily mitigate the effects of Armor and Penetration (whether they are positive or negative) with varied sources. 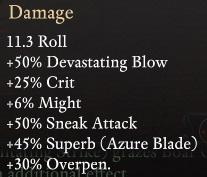 Area of Effect and Safe-zone

Many effects have a set Area of Effect in game and most hostile effects affect both enemies and allies alike. There’s a catch to this in a quite significant way though. Any bonus improving the size of an Area of effect does it by adding a safe-zone to the effect. This safe-zone is the part of the effects that can only affect enemies but not your party.

The image below shows in red the base area of effect of the spell with the added safe-zone thanks to bonus Area of effect provided by varied sources. 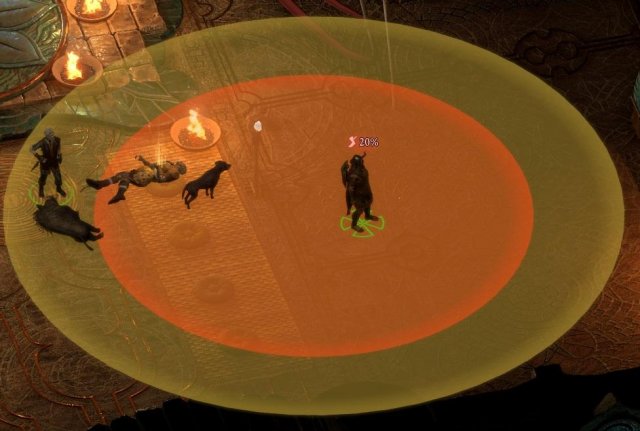 And here is a little image to show an interesting fact about areas of effects that could be misleading. 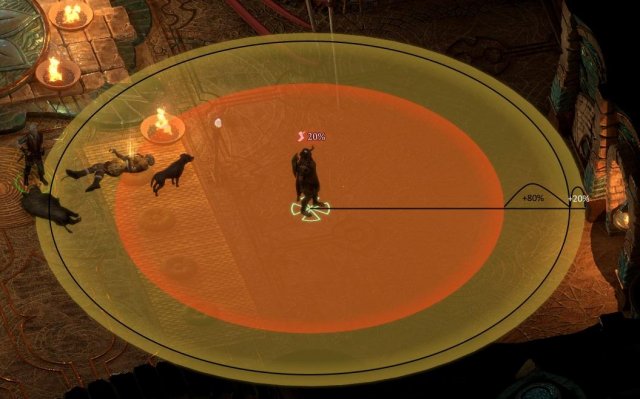 So why does our area of effect doesn’t seem that much bigger?

It’s simply because it’s a surface and not just a simple line. The yellow circle is indeed twice as big in surface as the red circle even if our eyes doesn’t necessarily perceive it as such. The isometric view makes it even more misleading as they are not full circles since the view isn’t strictly from above.

So yes investing in area of effect can be beneficial but don’t expect to cover the surface of Eora with a single spell either, remember that it will always be surfaces. (And just for information the spell used in the example (Tanglefoot) is a spell with a particularly massive are of effect, few spells have such a big area of effect to begin with.

Recovery time is one of the most straightforward value in the combat system but it’s stilll worth talking about it seperately as it can often be underrated.

It represents the time where your character can’t act after an action is performed. A huge majority of the actions in the game triggers a recovery time and all spells and weapons clearly display what recovery time they trigger when performed. It is worth noting that recovery can occur while characters are on the move. Likewise reloading (for the weapons that do require reloading) is seperate from recovery time but works the same way. This means that you can cast a spell while your weapon is magically reloading by itself and then shoot with your weapon. This tip doesn’t work the other way around as you can’t shoot during recovery time so you have to shoot first and then cast a spell.

Action Speed is the speed at which your character performs actions. This not only affect things such as Attack Speed or Cast Speed but also Recovery Time and Reload Speed. This makes action speed pretty potent overall as it gives more reactivity to your characters and improves their damage per second output overall.

Let’s take the Resolve Afflictions as an example to see their effects and how they ramp up from one another:

Engagement has evolved since the first Pillar of Eternity game. It still works the same but the ways to apply it have changed.

Engagement occurs when a target attacks an enemy in melee (and can apply Engagement, see below the conditions to apply it). If a target is engaged an arrow will be displayed in green for ally engagements or in red for enemy engagements.

Below is an example of multiple Engagements going on at once. 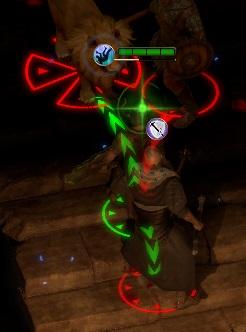 When a target is engaged if it tries to move away from the enemy engaging it it will suffer an automatic attack from the target. Many spells and passives interact with Engagement such as passives to increase Deflection during Disengagement only.

On top of that some specific actions can break Engagement such as inflicting specific Affliction breaking Engagement on the enemy or by using a movement ability with Disengagement effect to move out of range for example.

The key difference with the first game is that by default characters can’t engage enemies. They need to have any effect giving them additional Engagement targets as the default number is 0. The most common way to increase the number of targets engaged is by wearing a shield as it gives +1 Engaged target. Classes allowing for melee weaponized combat tends to offer passives or abilities to increase the number of targets Engaged and even improve the effects of Engagement.

The Flanked status is a particular affliction in the game that can be triggered in multiple ways.

The main way to inflict the Flanked affliction to someone is by having two targets engaging that target from two different directions (directions are represented by the arrows around a target when it starts being engaged by someone).

The Flanked status gives a -10 Deflection to the target afflicted by it and interacts with certain abilities such as the Sneak Attack passive from the Rogue. Flanking enemies is a good way to lower their Deflection reliably to score more hits and crits and take care of targets quickly.

Console commands for some extra pets. Console Commands There are 3 bonus pets that I know. Open the console and type in the following: cosmic dog – gives you Comet […]

Have you ever wondered what the vendor is not telling you about ships? If so, take a look on the screenshots of every ship and see for yourself. ContentsDyrwoodan SloopVoyagerDhowGalleonJunk […]

This is a comprehensive achievement guide for Pillars of Eternity II: Deadfire. As always, beware of spoilers. Other POE 2 Guides: Characters and Classes: How to Make a Good Character. […]