This guide will hopefully help all you few and far between mages out there to enhance your PvP skills. In this guide, we’ll overview builds, spells and many situations you’ll likely encounter as a mage trying to PvP.

A Quick Review of Spells

Here are the spells that you should consider using

Great Farron Dart: Buy this from Orbeck for 2000 souls once you’ve given him the Sage’s scroll. This spell is very similar to the Farron dart spell. These two are the quickest spells to cast and are akin to throwing knives. With very low stamina cost and somewhat low damage, the Great Farron dart is a very useful spell.

Farron Hail: This spells shoots out a myriad of Farron Darts in a cone in front of you. I’ve seen many mages use this spells, and ultimately, I would not recommend using it. I have almost never been hit by it, and when I have, it did negligible damage.

Crystal Hail: This spell sends a crystal soul arrow up into the air which then rains down many crystalline darts. Once again, while many people use it, I do not recommend it for the same reason as the Farron Hail.

Great Soul Arrow: an objectively better version of the Soul Arrow sorcery. With the same cast time, more damage and only slightly higher stamina and focus point consumption, this spell is probably going to end up in one of your your attunement slots.

Crystal Soul Spear: A must have spell for any sorcerer. This spell consumes a lot of FP, but its damage is very high, as well. It is also important to note that this spell pierces through opponents, making it very useful in situations where your enemies stand in line in front of you. Get this spell from Orbeck after you gave him the Crystal Scroll.

Homing Soul Mass: This spell conjures five small spheres that will automatically shoot towards your target when you’re in range. I cannot recommend this spell enough.

Crystal Homing Soulmass: A more damaging version of the Homing Soul Mass spell, this spell will do a lot more damage but will also consume quite a bit of FP and stamina. I personally use this spell over the regular one.

Farron Flashsword: Obtain this by buying it from Orbeck or Yoel. This spell conjures a straight sword-like sorcery that does a lot of damage and can be cast multiple times. While its start-up frames are somewhat slower than a real straight sword, it can be really useful for combos if you’re going with a heavier weapon in your other hand.

Soul Greatsword: This sorcery conjures a massive sword which you swing in a cone in front of you to deal massive damage. I somewhat recommend this spell, but take notice that it has to be timed extremely accurately or you’ll end up missing your target.

White Dragon Breath: this unique sorcery shoots crystals on the ground in a straight line in front of you, which can also deal damage to enemies that are not in your line of sight. It deals only very slightly less damage than the Crystal Soul Spear with almost half the cost. That being said, I do not recommend this spell. While its damage is good and the FP cost is low, scoring a hit with this spell is nearly impossible in PvP scenarios.

Soul Stream: the most damaging sorcery of them all, this spell can deal up to 1200 damage in a single hit. Nonetheless, it is worthless; its cast time is disgustingly long and it’s extremely easy to dodge, and it renders you an easy target and opens you for backstabs.

Great Deep Soul: A better version of Deep Soul. Obtain this by turning in 10 Human Dregs to Archibishop McDonnel’s corpse. This spell sends a slow moving projectile that deals sadly little damage, but is very spammable. Not recommended unless using a Dark Sorcery build.

Affinity: a dark version of the Homing Soul Mass spell. This spell consumes as much FP and stamina as the Crystal version, but it has much better tracking than the regular or crystal version. Not recommended unless using a Dark Sorcery build.

Dark Edge: Another Dark Sorcery, this spell will create a massive curved sword and slam it down in an overhead fashion on the groud, dealing massive damage to enemies in range. Not recommended unless using a Dark Sorcery build. 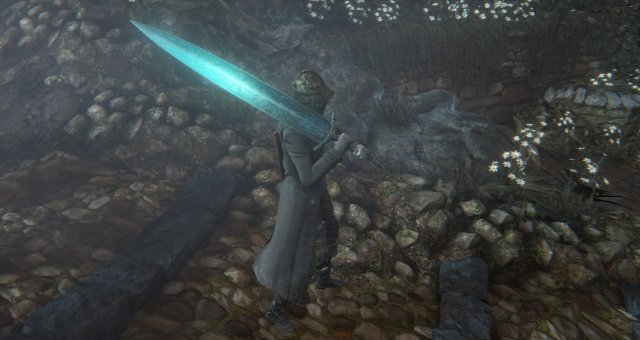 Moonlight Greatsword: transposed from the soul of Oceiros, this iconic greatsword is a mage’s friend. Weighing a bit high at 11.5 units, it has great range and damage, and loses near to no damage when one handed. It deals a lot of magic damage and a fair amount of physical damage. Its charged strong attacks send a crescent projectile that goes directly forward and damages enemies.

Friede’s Great Scythe: this DLC weapon has very decent int / dex scaling and a really cool moveset and weapon art. It has slight Frostbite build-up and deals pretty decent damage, but is hard to pull off.

Crescent Moon Sword: Currently very underwhelming, this cool weapon suffers greatly from low damage and awful, awful scaling made even worse by split damage. It uses a typical curved sword moveset and has average range, and its weapon art is cool, but it is still not worth it at all to use it.

Cleric’s Candlestick: This low-damaging sword acts both as a weapon and a catalyst, allowing it to have a normal shortsword moveset and cast spells with its heavy attacks. This weapon renders Farron Flashsword useless, but its low damage and spell buff make it not recommended as a PvP weapon.

Immolation Tinder: This halberd, dealing fire and physical damage, can cast spells with its heavy attacks, like the Cleric’s Candlestick. It otherwise has normal halberd moveset and hyperarmour, and deals decent, yet slight subpar, damage.

Heysel Pick: the third and final weapon that can cast spells. This hammer, as of the recent patch, has slight hyperarmour and decently fast moveset (but awful tracking) and it deals very decent damage.

Lothric Knight sword, Longsword, Astora Greatsword, Spear and Follower Sabre: These weapons may not be mage weapons, but infused with Crystal they get great intelligence scaling and become usable, even as a mage. 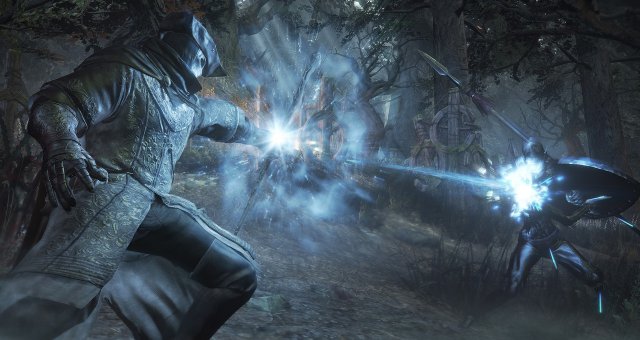 Surprising as it is, mages have not one, but several builds viable for PvP. After three months of playing a sorcerer, I found that these are the viable mage PvP builds, in order of viability:

This is the build you’ll likely encounter the most when meeting sorcerers. This build usually has 3-5 attunement slots, standard 30-40 endurance and vigor, 60 intelligence and negligible stat investments to meet requirements for weapons. This, by far, is the most viable sorcerer build in Dark Souls III.

Gameplay:Using a melee weapon and a catalyst, battle-mages combine spells to punish foes from afar and melee blows to damage them when getting in too close. Usually, you’ll want to use a Court Sorcerer staff in your left hand, while wielding a melee weapon in your right. Weapons you’ll likely want to use include the Moonlight Greatsword, Greatsword of Judgement or a standard weapon, infused with Raw or Crystal.

As previously stated, as a battle mage, you’ll be playing like you normally would with your weapon of choice’s one-handed moveset, with the addition of spells to your arsenal. Does your enemy stay too far? Blast them with projectile spells. Getting in your face? ♥♥♥♥♥-slap them with your weapon. Let none escape your wrath.

Spellblade are very similar to battle-mages in term of gameplay, but they do have one major difference: Instead of a catalyst and weapon, they use a weapon-catalyst, namely the Heysel Pick or the Immolation Tinder, which have their own moveset, but can also be used to cast spells with their strong attacks.

Players may find that these require a bit more stat investment to pull off, but they largely play exactly like the battle-mage does, with the exception of having your off-handed weapon be the Scholar’s Candlestick all the time.

Pretty straightforward: use the Scholar’s Candlestick in your off-hand and the Court Sorcerer staff in your right hand. Only int investment required. Hard to pull off.

Hybrids can be played in a variety of different ways:

Dark Sorcerer: Using the Izalith staff and dark sorceries such as Dark Edge or Affinity, your stat investment should be around 40 int and 40 faith, and you’ll still want to use the normal mage equipment setup.

Priest: Miracle / Sorcery hybrid spellcaster. Very hard to pull off, and requires a LOT of stat investment. You’ll want 48 faith and 48 int, using a talisman in your left hand to cast miracles with the poise weapon art and an Izalith staff for Dark Sorceries or Crystal chime for normal Sorceries respectively, in your right hand. The high stat investment will come in cost of health and stamina, and you’ll need to be near perfect in your rolls because you’ll die in little to no time.

Hexer: Pyromancer / Sorcery hybrid spellcaster. Hard to pull off, but not quite as hard as the Miracle / Sorcery hybrid, as it only requires 40 faith / 48 int to use. Use a left handed pyromancer Flame for pyromancies, an Izalith staff for Dark Sorceries or Crystal chime for normal Sorceries respectively, in your right hand, like in the previous build. 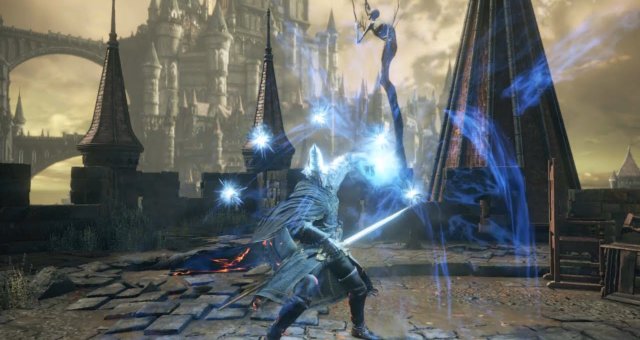 Sorceries can and will become predictable and are generally easy to dodge. Remember to use every tool in your possession to win:

Find your own playstyle, and mix up sorceries.

There are many ways to play mages. Mix and match and find whatever you find the most effective. Remember to experiment! Test out combos, use your weapons and try to play as unpredictably as possible. Remember- standing in place and casting the same thing over and over is unlikely to yield result. Try delaying Soul Masses, or spamming Farron Darts, or mixing up melee attacks with Farron Flashsword or Soul Greatsword; there are many more interesting things for you to do!

Don’t let anyone tell you spellcasters are not viable.

Magic isn’t good. Magic isn’t bad. Magic is, simply put, broken. Spamming Crystal Soul Spears can make a run through higher NGs seem like a smooth breeze, but it can also become impossible to defeat bosses using only spells in certain cases. Dark Souls 3 was not designed for magic. It was designed for melee combat.

That doesn’t mean magic is bad. It means you’ll need to learn how to play with magic; it will be extremely easy at some points and extremely hard at others; remember to give mages a fair chance before you break your controller and go back to using your old character. Allow yourself to learn mages.

Undead Bone Shards are Consumables in Dark Souls 3. Their number in this game is 10. You have to collect them to raise your Bonfire Level and besides that they […]