A short guide highlighting information that may help aspiring engineer players. Although some of the information highlighted may seem trivial or common sense im writing this as something to assist newer players to the class and or tell details that may often run under the radar. I have learned this informaton through playing engineer a lot and i hope it helps you.

Important Info for Your Abilitys and Where to Use Them

The abilitys of the engineer by them selves are very focused towards a survivalist mentality. Examples include a healing ability a defence ability, a offence / defence based attack ability and a turret that works best on defence.

Dont let this put you off as when utilied well each of these abilitys can have deadly utility. Let me detail information and uses for each.

Shield Wall: This shield which appears basic and with little use at first is one of the most versatile abilitys. First off it does not have a health pool making is impossible to destroy, the only limiting factor is the length it lasts increasing depending on rarity. Using it on defence of course is what you would first use it for but i find that is one of its weaker uses. It is a excellent 1 way defence that you can throw down in the middle of fire. This makes it possible to place it in front of the enemy in the middle of a area without barriers giving you a incredible advantage being able to shoot the enemys behind a indestructable shield. It also makes a excellent way of checking your serroundings. Want to peak your head to look for enemys “Boom Headshot” we all know this pain but its avoidable by placing the shield first being able to check in safety. One last use which i find can be valuble in certain situations but requires a certain degree of practise and intuition. This is placing it right between you and the enemy and running side to side through it utilising the curve to stay protected while shooting a target on the thin side of the shield. This is very confusing for the enemy daring between secruity and danger in a unpredictable way over the weaknes of the shield. Given the practise you can use this tactic to move the enemy where you want them giving you the advantage.

Turret: This ability is at first appears to be very weak almost useless but in fact has several uses and is rather versatile. I find this ability works best on solo and its that bit of backup you need to give you the edge. The enemy needs to shoot you or the turret first which reduces there speed. It also is excellent for watching your blind spot place it down and you will hear the turret befor the footsteps. Another use is covering your flank or even using it to cover your escape. It is simple but as long as its down you have that extra eye around that will follow the enemy and distract them well.

Fire Bomb: A simple yet effective offence and defence. A engineers most obvious weakness is he has no detection ability. That is where this can be used as it can deflect off walls you can use it to check round corners as damaged enemys are highlighted. It is also good for smoking enemeys out of rooms and can also be a great scare tactic making your enemy panick “arg fire i need to get out” is ones first instinct. It can help you avoid many a trap. And finally it is great for fighting agressively combined with “Thrust” the mobility ability. Fly high and rain down that grenade of fire and as they run shoot them in the back or let them take damage and flee.

Thrust: The mobility ability that is both strong and weak simutaneusly. The ability by its self appears terrible compared to the other abilitys on the champion roster but dont be fooled. This ability all be it weak is powerful when in the right enviroment. Allow me to elaborate, This ability by its self is rather poor but when combined with a enviroment with lots of buildings, its short cool down allows you to dart around like a maniac making you much more difficult to shoot while allowing you to shoot from a vantage poing, the sky. Combined with the fire bomb it is a dasterdly combination. Not only this it is also valuble for moving around as a verticle ability allows you to get into places others will have difficulty allow you to set traps or flee in a hurry. It is also great for looting you can learn routes and utilise it to cut the time down with hyper efficent scaling of terrain.

Healing Totem: The most self explanatory ability yet invaluble. This ability is definetly one with a time and a place. If you are entering a area with low recovering potions this is the best ability giving you the healing edge to out endure any enemy. It can also make you unkillable with the legendary tier as long as your not near 1 shot. Sadly this ability does lack versatility but is a excellent choice when in squads or duos.

Although the engineer may first appear rather weak if you correctly utilise these areas he has terrifying dominence. The areas im talking about are places well built up with lots of barriers and buildings, and possible vantage points.

These areas are the best because they drive value from your ability thrust allowing you to use its max potential. It of course takes practise but with a bit of intuition and a dash of courage those threats will be ant beneath your feet. This is where your legendary weapon comes in. It i find is best utilised in the air raining down grenades doing dasterdly amounts of damage. By thrusting up you are above the barriers meaning you can shoot unobscured making a lot more hit. Then when you fall down you can aim for any barrier you like being protected while shooting curved grenades as cover fire stopping them from repairing befor the next carpet bomb.

Ways to identify a advantages area includes. Lots of barriers, lots of tall areas where your thrust can be utilised in ways that other abilitys cant reach for example high inclines and tall houses. Enviroments where you can set your self up to heal while being protected on several sides. Areas to set traps where your not visibil but can easily attack and passerbys. And another is having a clear route of escape where others would struggle for example a incline or 2 you can vault quickly and escape on your horse.

Some examples of these areas i have found include: 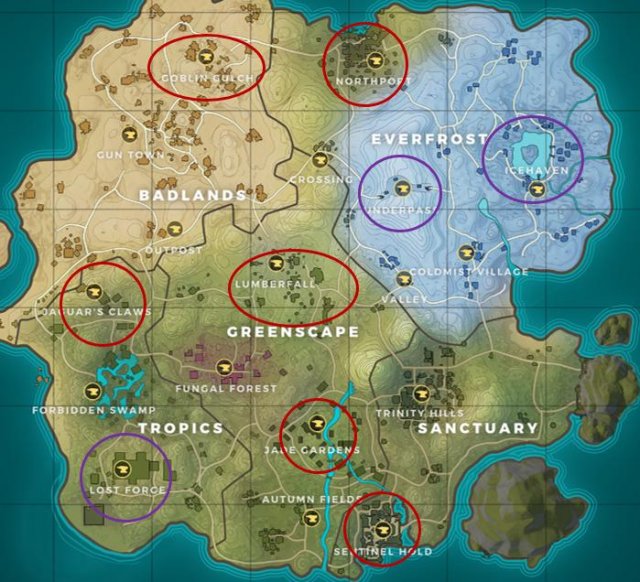 Weaknesses, Advice and Things to Note

The engineer has several weaknesses that must be know befor someone plays engineer. The first major weakness is a part of the legendary weapon. It lacks range its reliable at close range but the shots become difficult and slow to aim in long range it takes much practise. This is why fighting in close range is vital and or substituting the second weapon slot with a weapon like the heirloom rifle.

When trying to get someone into close range, you can use many methods. These include getting on your horse and running like a mad man towards them in a way to avoid bullets. Another includes hiding and letting the circle push them towards you. And one last way includes setting traps potentially at the anvils sitting and waiting for your prey to get into a place they cant escape. All you need is a maximum of 3 solid hits suppliment with a fire bomb and they are out.

Another weakness is the mobility abilitys “Thruster”. Make sure to avoid open plane combat where possible and stick to high barrier and built up areas.

Some things to keep in mind as engineer include, you can use thrust to get into many places your not supposed to or take the advantage point, like jaguare on the map if you launch up you will find a splendid spot to set a trap or hide. Another in underpass the entrance too the left on one of the tall icicles the one on the wall there is a invisible platform you can use to set traps.

Another peice of info is your fire bomb. Given practise you can snipe people around corners with it, you will find no limit with how much it can rebound off walls. Use a little geometry and suprise those dasterdly enemys.

Keep in mind one of the positions to avoid is being shot at with the hunters legendary weapon the bow. Its fast and long range out matching any engineer avoid being shot at, get in close range or flee simple as.

The barrier ability also stops abilitys like fireball but a splash effect that hits the ground befor it will travel under the barrier be aware of this flaw.

Beginners guide. How do you get better? Maybe you will get more Crown Royale. Tips for Beginners Choose the right class If you want to be strong. Play all classes […]

Displays the ranks and the currently known information on the ranks. Other Realm Royale Guides: Basic Tips and Tricks. Hunter Guide. Warrior Guide. ContentsBronzeSilverGoldPlatinumDiamondMaster and GrandmasterHow Do the Ranks Work? […]