Here is a little guide to going through slum of the shadow fog without alerting the other groups using Heixing.

The Map and the Path

Here is a map of the area along with the path I take if you don’t want to get detected. 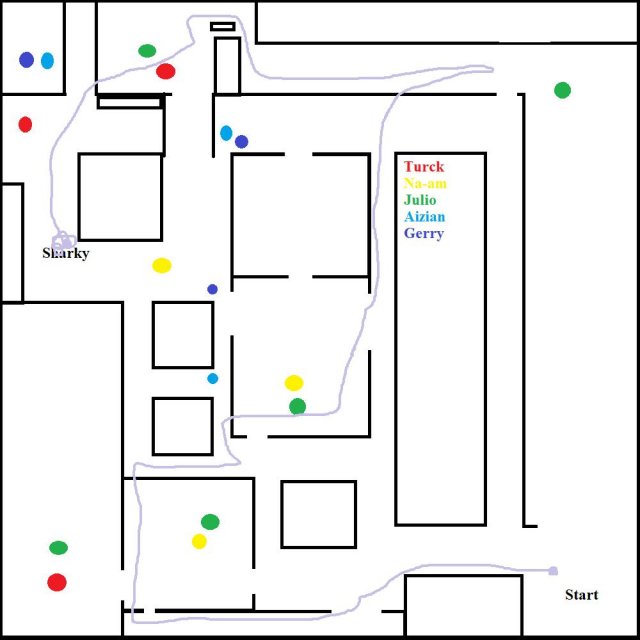 How to Attack the Groups Without Alerting Other Groups

Path will change a bit depending on the bosses so I will mention them after the clips.

So this part will be the same regardless of if a boss shows up or not.

Just walk up the left side and AOE down on the group, the last 2 stragglers wont alert the group up north so u can just finish them off after killing everything in the middle.

This part is the same regardless of the boss.

If Turk is in this group then you will have to avoid it til the end, otherwise just kill them all like this.

Gerry and Aizan can be in the pathway where you walk in the video, if they are then you can just go around them and aoe this group from the opposite side.

Just push up the right side, there are usually 3 enemies here unless julio shows up here but he can be killed pretty quick.

Once you kill the group on the left just inch your way to the right and clear that group.

With the sharky mob I usually just charge in from the area behind but this is how you do it with stealth. You have the kill the 2 patrolling units and then sneak in up the steps.

This guide describes the basics of how action time works and discusses the masteries and mastery sets which can reduce your action time and how best to use them. ContentsAction […]

Here you can find various creature builds in Troubleshooter: Abandoned Children the game. Guide to Creature Builds Introduction This is a guide that I’ve created as I noticed there were […]

Troubleshooter: Abandoned Children – Tips and Tricks for Getting Started

Before you play the Troubleshooter: Abandoned Children game, you will definitely want to know these simple but useful tips and tricks. If you have any tips feel free to share […]