This guide will get into details on how the clutch mechanic works for noobies!

The Clutch should be set to the L1 or left bumper button by default. If not you can change it in the controller options which you can access on the bottom of your character portrait when picking a character.

When using the Clutch you will notice an icon floating right above your character’s head signaling that it’s being pressed. You can see it down below with an additional zoomed in screencap. It’s also visible to your opponent, so watch out!

Clutch is used for a variety of actions, at the bottom you can watch a video for a better visual representation. It’s pretty straightforward but it’s also tricky to use in the heat of the fight! 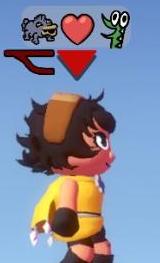 Ittle Dew has the most attacks that use the clutch function. They are:

All of them function by making her dash in the reverse direction she is facing. The clutch can be activated during any of those attack frames.

Jenny has three moves that can be clutched. They are:

Like Ittle most of them can be activated at any time during the attack animation except for the dual axe slam. Once you go down… it’s going down.

Ruby only has two attacks that can clutch. They are:

Unlike the others so far the Down Special can only be activated at the start and while in the air. It consumes one of your jumps so keep that in mind.

The neutral Special can also only be activated in the beginning of the animation. Once you start swirling you won’t be able to reverse.

The big fish also has only two clutch attacks. They are:

The dumbbell toss is unique because you can gain momentum with your side special (dashing attack) jump, charge your Air Strong and clutch it to become a fast moving floating nightmare. The video below shows an example of this (The example starts at 00:59!)

The Flex makes you stop moving and immediately face the opposite direction.

The Saturnian Healer also has 2 moves that clutch. They are:

The flask can be clutched at anytime during the animation, even a bit after she’s tossed the flask!

The Down Special is the same, it’s a very brief animation but you can clutch and dash just a teeny bit while placing or detonating.

BCM again only has 2 moves that clutch. However there is another special trait I will get into below. The attacks are:

BCM is a unique character in that he gains and spends cash with specific attacks. When you “SELL” you spend money and make an attack more powerful, however by holding clutch during these attacks you can prevent BCM from spending the money. Doing so will ensure that the money isn’t squandered on poor opportunities or let’s you save up to $1,000 so you can perform your ult!

There may be more this handy technique can do, it’s best to practice and experiment bit by bit to see how clutching can give you an edge.