Since the DeeDee Exclusive characters aren’t in the normal roster, Ill tell you what they all do!

DeeDee is an animatronic that can randomly spawn (Unless DeeDee repel is used) in your office at any given time. DeeDee will sing a little tune, then will be followed by a message that says:
[A new challenger has appeared!]

There is a slight chance however that the message will not appear. This means that DeeDee has not summoned an animatronic.

However, DeeDee does have an exclusive roster that is inaccessible to the player, and can only be summoned by her. These animatronics are: RXQ, Plushtrap, Nightmare Chica, Bonnet, The Minireenas, and Lolbit.

Fredbear is not a part of deedee’s roster. Fredbear must be summoned by you.
Well thats enough about DeeDee, lets move on to the DeeDee Animatronics.

RXQ is pretty simple, He will black out your office for about 10 seconds. He does not affect the cameras in any way, and he does not do anything else.

After DeeDee summons him, He will be located at Funtime Foxy’s Cove, sitting in a chair. You will have to click on him to get rid of him. If you’re too slow, he will jumpscare you.

When DeeDee summons her, Teeth will start to close in on your screen. To get rid of her, Activate the Power A/C until the teeth disappear from the screen.

Bonnet behaves similarly to how she did in the FNaF SL Custom night. You will hear her laugh, and see her walking to the other side of the screen. To get rid of her, simply click on her nose.

The Minireenas Also behave similarly to the Minireenas 2 in FNaF SL Custom Night. Once DeeDee summons them, they won’t appear until you rise and lower you camera. However, unlike FNaF SL Custom night, They do not accumulate, they all appear at once. They do leave eventually though.

Lolbit behaves exactly as he did in FNaF SL Custom night, She will appear on the screen causing an audio disturbence. To get rid of him simply type L-O-L on the keyboard.

As I said earlier, Fredbear does actually not belong to DeeDee’s roster. You have to summon him yourself. To do this, you have to set every single animatronic to 0, except for Golden Freddy, Whom you will set to 1. Start the night, and get 10 Faz Coins. Once you do, buy the death coin. Now simply try and get Golden Freddy to appear, and click on the death coin.

XOR is just an altered version of DeeDee that always spawns in 50/20 mode, but she can also very rarely spawn even without all 50 of them active.
XOR acts just like DeeDee, but unlike DeeDee, XOR always spawns DeeDee Exclusives, and will continue spawning them in rapid succession. 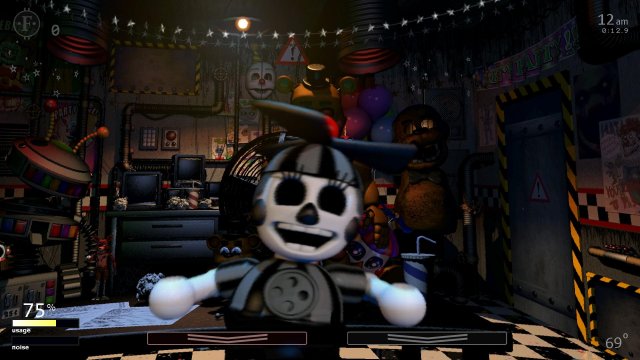 Ultimate Custom Night – How to Cheat

I made this guide since I didnt see this kind of guide done yet for this game, and with it, you can get infinite items and a HighScore of 10000, […]

Ultimate Custom Night – How to Get 9000 Points