This is an in depth guide to complete For The King (the gamemode), hope you find it useful 🙂

This could be the most important decision you make throughout your gameplay, so I decided to divide them into the subclasses to help you make a smart choice.

Your average team should consist of a character per class although if you think something different works for you go for it! I would suggest using either the first or last spot for the tank and follow him by the dps and then the support. I usually position them this way to minimize the damage the party takes since the tank is supposed to take damage and the dps usually has more HP than the support. 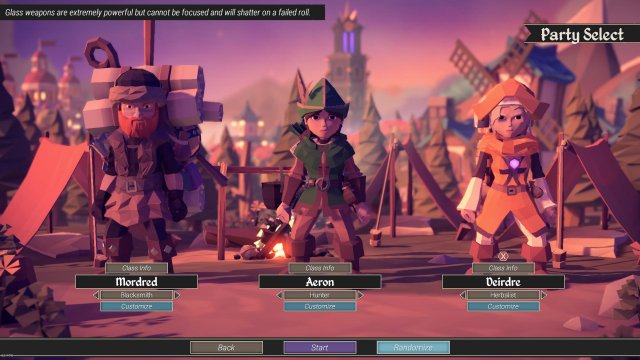 Take your time with each objective, you really don’t want to rush them unless you have to because the game has a 90% inflation rate in the easiest difficulty and 100% in anything harder than that, so after completing an objective things will become twice as expensive.

Also, avoid Leprechauns, you will have to fight them most of the time if you find the pot of gold and they will rob you and flee, it’s just not worth it…

When you start the game you will spawn in the city of Oarton, the things in the store are pretty crappy usually but you will be able to take some quests from it, which I recommend starting right away.

I usually check for the item quest first since I’ve gotten good items from this quest but if it’s a breakable weapon or something you don’t need just go for the gold, chaos shouldn’t be a problem as you get rid of it when you beat the mines and we will get to XP later. (Note that usually the quest with the most gold has a harder enemy if it’s a bounty mission but it’s still worth going for it).

You want to have your whole party at level 2 before entering the cave, try fighting as many monsters as you can before going in, finishing your town quests and buying a lot of Godsbeard for your support with that money, you won’t need it too much in the cave but later in the game you will.

The Glittering Mines shouldn’t be too hard to complete, it’s a 2 floor, 11 room dungeon, target jellies, hags and banshees, as their effects will persist after the battle ends. Use your Tinder Pouch after you reach the end of floor one.

The boss fight will be a Chaos Priestess and two Bone Soldiers, I would recommend targeting the Bone Soldiers with magic or armour piercing first to get them out of the way and then fight the Chaos Priestess. Then disable the chaos generator and you’re done.

Your party should be about level 3-4 when you go to Praid, the good thing about Praid is that it has a decent market, so don’t be afraid to spend your money on it (don’t forget to buy Godsbeard, at this point you’ll need them). Go visit the Night Market during the night to get better things. You might also want to upgrade your Old Pipes to Elm Pipes, if you can’t afford all of them at least get the support one, this will increase the healing from 15 → 30.

Try to reach level 5 (don’t go for the XP quests though), you want to be level 6 and deal +15 damage with your characters before progressing in the game. Get all the sanctums, stone, silver or gold (if you have them) statues you can find and do all the lucky wells you find. Also, try buying a boat before the prices are ridiculously high.

At this point you want to go to the Forgotten Cellar and fight the Acid Jelly, for this fight I suggest one of three things:

I would suggest fighting it with the tank.

Then go for the Mind Lord, he really isn’t too hard to kill, he is surrounded by two Undead Knights, he might confuse one your characters (except the scholar if you have him) and this will cause them to do a random action, I would suggest killing the Undead Knights first with armour piercing skills and then killing the Mind Lord, if one of your characters flees and you haven’t killed at least one of them I would retreat and try again later, a 2v3 is not ideal.

By now you should be level 6, own a ship, and hopefully, an item with “Heal Party” if you selected someone other than the Herbalist as your support.

This is the part of the game where you start going into Sea Caves, this is a really productive way to level up since time won’t pass as fast and you can get good items from drops and Precious Pearls (which are really useful in the final fight), I would suggest doing from 4-5 of this caves, when you’re done you should be around level 7-9.

Now you also want to fight Scourges (they drop fantastic objects), the most useful are The Coal Heart, The Disciple and The Hangman, the two last are the most important, the Hangman’s Hood is super effective against The Undead Bisontaur and The Lich, and the Disciple Hood is very useful against the final boss.

4th Objective: Back to the Dungeon!

Now that your party is this strong you can go in the Lich’s Crypt and finish it with no problem. The Lich’s Crypt is a 2 floor, 5 room dungeon, the dungeon’s boss is well… The Lich, he has two Bone Warriors with him, you might want to kill the warriors first and then the Lich, at this point it should be a piece of cake. After you kill them you should receive the last Key Fragment and a sick crown that you can put on your intelligence based character (if you have any…).

Now go to The King’s Maze (I highly suggest getting The Hangman’s Hood first!), this is an 11 room dungeon, that has The Undead Bisontaur as it’s boss, he will be with a Fire Priestess and an Ice Priestess, this fight can be really annoying since all of them have high HP and have high damage, I would kill the both the Priestesses first (starting with the fire one) and then kill the Undead Bisontaur. Take an item with “Heal Party”, you will take some damage here, and something with bleed or some sort of debuff to kill the Priestesses.

After this fight you might want to go to the nearest town, heal up, upgrade your pipes and buy as much overpriced Godsbeards as you can.

Hopefully you’re level 10 right now. You want to make your way to Hasta and buy a Gladius (this is important) and something that has a freeze chance, I recommend an Ice Sword, a Glacier Tome, or a Frost Lute. Then, go to the Demon Cave, they’re pretty hard since they have high level enemies but since you’re about to finish the game don’t worry about using your Tinder Pouches and Godsbeards.

In the cave you will most likely find a couple of Acid Jellies, if they hit you and you don’t happen to have Panax use one of the Precious Pearls, also, there’s one archer in the cave that will give you a Death Mark on his first attack, kill him as fast as you can, to be honest I don’t know if there’s a way to get it removed, you could try using cure if you have a healing lute or using an item that makes you immune to Death Mark like The Hangman’s Hood. For all I know there’s no other way to get rid of it…

For the fight with the Ember Demon use the ice items I listed above, they won’t have any additional debuffs for him but since he attacks with melee attacks and is alone you get to finish the fight faster, which is always nice. You will have to fight two of them so you can get the airship to be able to fight the final boss.

Complete the level 9 buried temple, it will give you some items that offer immunity to the debuffs that you will receive on each floor of the final dungeon. It’s not too hard and they help a lot.

Now head to the final tower (you might want to keep at least 3-5 Godsbeards and 2 Precious Pearls).

Your first fight will be against a Harazuel High Guard, a Chaos Protector and a Chaos Warrior. In the second floor you will fight against an Ice Revenant and two Ice Warriors, for this fight you might want to have a mage or a piercing attack since the Ice Revenant will buff their armour and make them really tough if you don’t have either. The third floor is a fight against the Fire Revenant and two Fire Archers, in this fight the Fire Revenant will buff their evasion which is why I would recommend taking weapons with high damage for when you manage to hit them. Your fourth fight will be against a Lightning Revenant and two Lightning Imps, this is a tough fight if you don’t have The Disciple’s Hood, the Revenant will shock you and this will cause you to not be able to hit the Lightning Imps, so I suggest killing him first if you didn’t get the Disciple’s Hood, if you own it then go for the Lightning Imps first, in this fight you want to use your tank as much as possible since the Lightning Revenant will also buff their magic armour making them really hard to hit if you have a mostly magic team.

Now you will reach a floor where you will receive items that bring your party to full HP and focus, then you will fight the Vexor and two Chaos Hounds, kill the hounds first since they have a lot of damage, this is where the Gladius comes in extra handy since it has an ability that pierces armour and Vexor will buff his armour and resistance a LOT, we’re talking 40+, so you really want to have this weapon, if he drains your focus use the Precious Pearls and try to get bleed on Vexor, he’s not immune to that debuff like the wolves are. The fight shouldn’t really be that hard after you kill the Chaos Hounds. Good Luck! 🙂

For The King – Ultimate Scourges Guide

For The King – Tips and Tricks

Some tips and tricks you better know. Including a “Infinite Campaign Workaround”. Starting Classes, Orders As you start the game, you can choose from 4 classes, more classes later but […]

For The King – How To Unlock All Characters