Introduction: (What makes Lian special, who are her main targets for killing/damaging?)

Lian – the Scion of Auto-Aim. The Scion is a very solid damage; and has a very powerful kit, and with this guide, you should be one step closer to mastering her, and her insane time to kill. Let’s get into it, starting with the Ability Overview.

Ability Overview: (A run through of Lian’s abilities, when to use them, and how to maximize their impact.)

Now Lian, contrary to ‘popular’ belief, takes a significant amount of aim. Her primary fire is extremely powerful when you can consistently land those shots, and means that you can reserve the auto-aim abilities for more meaningful situations. The rifle fires a shot every 0.45s dealing 400 damage at medium range. Although this does mean Lian has damage falloff, she can still be a problem at long ranges – her hitscan, burst weapon means she can outpoke some projectiles, as well as causing havoc with long ranged dismounts. It’s also important to remember you can headshot with Lian – for an additional 200 damage – this can give Lian some extreme damage potential; with a hitscan weapon and a quick fire rate; she’s by all means a force to be reckoned with. Oh; and a quick sidenote, each successful shot will gain you 2% ultimate charge.

Valor allows you to fire a somewhat ‘normal’ rifle shot – however everyone on your screen (in front of you) will suffer the 400 damage… wait a second; does this mean that Paladins is secretly promoting bigger monitor sizes!? (No, it doesn’t). This ability can be extremely useful as a finisher for targets trying to escape, or a long range poke. It’s also very helpful in initiating a fight – allowing you to deal large amounts of damage to the full enemy team (not to mention it allows for boosting of your elim count!), as further explained in the further sections of the guide – this ability is incredibly versatile and can impact your performance greatly.

I like to think of presence as a mini Lian ult – it’s a skill shot with a charge up time, which does make it hard to aim, that pierces enemies with no damage falloff – always dealing 800 damage. Similarly to the Scions ultimate, this is very useful in finishing kills or poking for some massive burst damage at long ranges. Another important thing to mention is the attack type of Presence, it’s classed as area damage, and so Haven (the most common blue item) won’t be your saving ‘grace’. I have noticed that this ability can behave strangely at angles, so don’t use it while you’re peaking stairs or objects. Either way, as you can see, we’re really stacking up on abilities that allow Lian to pack a massive punch very quickly…

Grace is a unique ability, in the sense that it is both a movement ability and a damage dealing one simultaneously. Ultimately, this means that every single one of Lian’s abilities deals damage – making her a single target burst monster – more on that in hints and tips. Grace is the perfect way to initiate a fight, and generally on Lian, you want to always have your Valor and Grace on cooldown – since they’re essentially no risk weapon shots that give you the edge in a fight. One important thing to note, is the 400 damage shot will be automatically fired at the person nearest to where you’re aiming, not nearest to you. This does add control to Lian, so make sure to make the most of it. (Quick tip; be careful not to slide off the map in a middle of a fight!!)

Enlightenment is insanely useful, however you should always follow these guidelines:

Some general information on the ultimate:

When it comes to legendary cards for Lian – it’s wonderful, in my eyes all of them are somewhat viable, just situational. This should be how Legendary Cards / Talents are balanced.

Presence deals up to 50% more damage based on range, and its Cooldown is reduced by 4s.
Eminence was the first card on Lian I played with (mainly since I only had it unlocked). From that experience, this card can be excellent on longer/larger maps, some particular favorites of mine are Frozen Guard (push/defense), Stone Keep. Furthermore, this card can give Lian some serious poke damage – meaning she can definitely rival snipers and do significant damage to scare them away. Overall, this talent adds a considerable amount more talent to the Scion – if you miss your shot you will be heavily punished as your cooldown won’t be reduced; I guess you could say the more risky talent.

My personal favorite to play with; these are the conditions that I’d recommend precision in:

Overall, if these conditions are met, then this is the card I would run – of course it’s personal preference. Not to mention the 6% damage (which will affect all your abilities except presence/ultimate) that results in a constant high DPS monster.

Your weapon shots reduce the effect of healing on your target by 90% for 1.5s.

D&T definitely seems to be the LC of choice in competitive situations – the ability to start with essentially 1800 more credits than anyone else is arguably a tad too strong. If you’re playing to win, I suggest using this card if they have any main healer or an off healer such as Grover and a Khan. You will want to adapt your playstyle somewhat, to make sure early game you’re spreading your damage out as much as possible thus achieving valuable output. The card is also extremely useful against champs that rely on self heals such as Buck and Pip, more on that later.

Grace now hits all enemies in front of you instead of only one, and its Cooldown is reduced by 1s.

My least played Lian legendary, from my experience this card is a lot of fun to play with, as you can build it with the infamous spammer loadout, to create a synergy fueled stomping monster. If the enemy is playing aggressively and not using cover, this is great fun and very useful. Arguably the least skilled talent, as it does encourage being reliant on auto-aim.

Itemization: (General notes on what to purchase with credits.)

This section is to show you some good Items to buy on Lian, it’s important to consider Death & Taxes too, so there will be two lists. Obviously these are subjective and can change depending on the situation! (The orange circle represents an item that is extremely situational!)

What You Should Buy For Lian Without Death & Taxes:

Healing / Utitlity – Some more good options for Lian are: 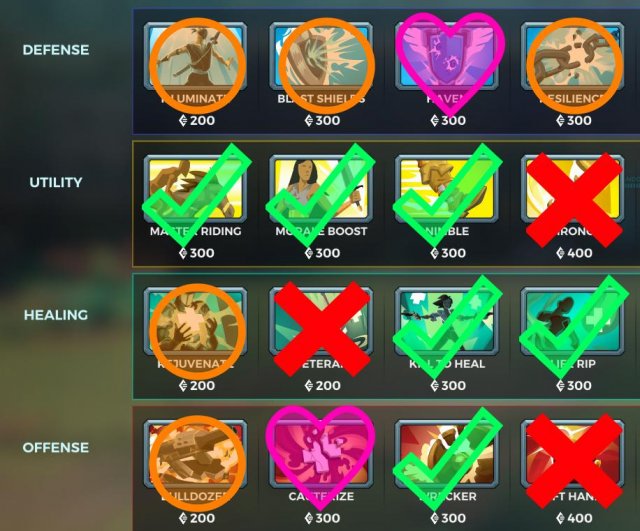 I would reccomend getting Wrecker if the enemy team has anyone who relies on Shields / Shield Frontlines. This means your team has the most Cauterize possible. If Wrecker is not necessary, then pick up a Defense item, or really any item you see fit. (Deft Hands isn’t the worst thing you can get…) 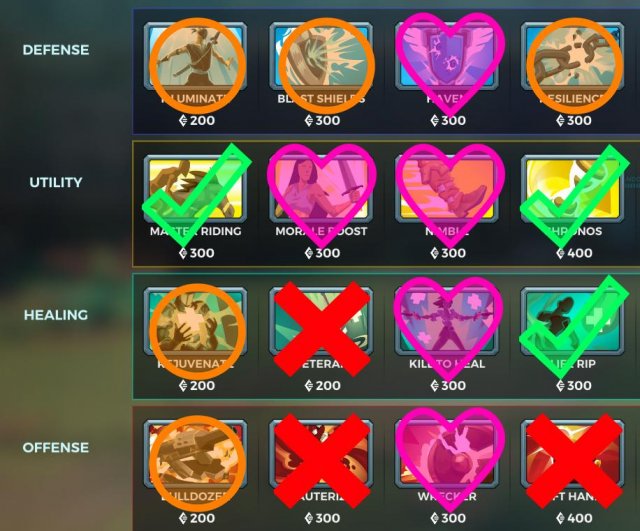 I have a lot of Lian loadouts – to avoid rambling on about each one I will just put which legendary card(s) they are best paired with – most of them can be used with all legendary cards bar Eminence, so try them all out and see what you like best. I am a big fan of DODGEMKART, a speed loadout, since it’s lots of fun and allows you to be a bit more aggressive.

Hints and Tips: (Tips on how to use Lian, special circumstances, etc.)

Lian can achieve some extreme DPS if she uses all her abilities in quick succession. A lot of the time this means that on your way back in when all your abilities are active, you can melt through one enemy, thus clearing the way for a teamwipe. Another important thing to remember is Lian has a very slim hitbox, this means you should always be strafing when shooting. This will give you the ‘high-ground’ in a 1v1; paired with the DODGEMKART loadout, you’re basically invincible! However, be careful to practice first, if strafing is throwing your aim off too much, then you might need to visit the Pips in the shooting range for a while.

As mentioned in the Death & Taxes section, consciously try to spread Cauterize as much as possible – this will make the team’s life a lot, lot easier.

Being a hitscan, it is also your job to take out airborne enemies. Make taking out Drogoz and mobile flankers such as Maeve and Evie your top priority. You can do this even more easily with your auto aim, just wait for the Evie to Soar, and then take half her health with a Valor and a Grace. Yet again this will make your teams life much more simple, and ultimately result in more wins for you.

Ranked: (Lian in ranked, when she is banned, who she might counter.)

In the current meta, Lian is a very solid pick in Ranked. There are normally one or two damages banned; so this means there is a lack of strong damages to play. Additionally, Lian can counter one of the strongest abilities in the game – healing. If the enemy team picks a strong Support, Buck, or Pip, then go ahead and pick Lian up (with Death & Taxes) – she’ll make short work of them. The same can be said if you need a damage to efficiently kill a flank, or Drogoz.

Paladins – Evie Character Guide (How to Play and Defeat)

In this guide I will show you how to play and defeat Evie. This guide is made out of my preference and experience that helped me win, it is entirely […]

A guide on how to quickly unlock the ‘Battle Pass 3 – Remix’ challenges. Other Paladins Guides: Buck Guide. Lian Guide. Cassie Guide. The Drafting Guide. Who is the Best […]

In this guide I am going to show you some tips & tricks on how to become a better flanker. Other Paladins Guides: Buck Guide. Lian Guide. Cassie Guide. The […]